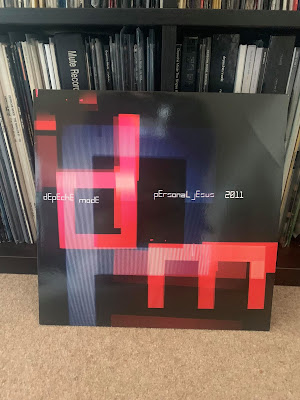 Depeche Mode's first remix album Remixes 81-04 was a success and it reminded everyone just how many good Depeche Mode remixes there had been. To fill the gap between Sounds Of The Universe and whatever was going to come next, another remix album was released, snappily entitled Remixes 2: 81-11.
A single needed to be chosen to promote the album and, having used and made a mess of Enjoy The Silence last time round, the band went for their second best known song and chose A Photograph Of You for the role. At the last minute however, everyone changed their minds and we instead got Personal Jesus 2011. The world will never hear the 23 long minute remix of A Photograph Of You by Brian Eno and Kylie Minogue and that is a shame.
Personal Jesus 2011 was so called because it was remixed and released in the year 2011. Here is the story of a mainly forgettable series of remixes, a nice piece of coloured vinyl and, sadly, the last ever BONG.
PUT ME TO THE TEST - PERSONAL JESUS 2011
The Single 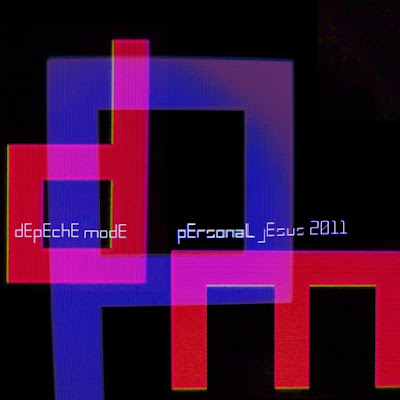 Personal Jesus 2011, BONG43, was first released digitally on 18th April 2011 with The Stargate Mix, the lead version of the song, and the Alex Metric Remix Edit made available. The physical formats followed on 30th Mat 2011.
Reviews of the single were thin on the ground. In its review of Remixes 2: 81-11, Pitchfork described The Stargate Mix thus:
"And of the three mixes of "Personal Jesus" here, one is pretty good. (That would be the one by Stargate, who are big enough Depeche Mode fans that they snuck a musical quote from Master and Servant into Rihanna's "S&M". Their version is also one of only three tracks on these three discs to come in under the four-minute mark.)"
In the notes that accompanied some versions of the promo CD, Tor Hermansen of Stargate confirmed that Rhianna had told him she was a Depeche Mode fan. So there you go.
The review of the album on the website Superdeluxedition said of The Stargate Mix:
"The Stargate Mix of Personal Jesus, lifts the spirits as we approach the end of the disc, with what is an uplifting trancey radio edit of this classic song."

The band displayed their usual enthusiasm when promoting a new single and seemed to overlook any form of promotional duty whatsoever. By this point in time, sales of physical singles were dwindling with people preferring downloads to actual records and so on. Depeche Mode's grizzly old fanbase are very much the physical format generation however so we always expect, nay demand, a 12" single and CD so that we can drone on endlessly about how you really can't get a feel for the music on digital only and that's so much nicer to have an actual product in your hand (oo-err) etc. You know the script - let's be honest, rather than laugh at the last sentence, you were all actually nodding your heads.

Anyway, Depeche Mode and other heritage acts fanbases aside, no-one was buying physical formats in 2011 as at that was so 1990's. As a result, the few of us risked derision by going to an actual shop to buy this ("Depeche what mate? A record? Haha. I think Tainted Love came out on a 7" - is that them?") and the rest of us went to trusty Mute Bank, the Bank that always provides a vinyl service and the result of those combined efforts saw the single fly into the UK charts at.....

The Stargate Mix is decent enough in a radio friendly, bleepy, trancey way and it is about the best mix of the various Personal Jesus versions available on the single. It's alright basically, and not as bad as Peace or Hole To Feed so it has that going for it.

That version has never been played live and that seems reasonable. It would have been out of place on any tour really, apart from the Delta Machine tour with the 43 minute long slow intro the song had. That really was a shocker.

The original video for Personal Jesus was a Corbijn masterclass and showed off the band's slinky new Violator era style beautifully, creating the first of that era's iconic images.
The video for Personal Jesus 2011 has a lot in common with that in that it has people in it and they are wandering around while a version of Personal Jesus plays. Those things aside, it's a load of rubbish really.
It was filmed in the Pzlen region of the Czech Republic and once again doesn't feature the band. It instead features a gang of people trying to drown accused of being a witch. She had apparently said that if we were all honest we would admit that Sounds Of The Universe was a bad album. but that enraged the Black Swarm (Plzen Branch) who were having none of that. They tried to drown her just because she was different.
The star of the video has the last laugh however as she floats out of the water and flies away leaving the bewildered Sounds Of The Universe fans reconsidering their position.
Or something. I tried with this one, I really did, but there is very little to say about it at all.
The Formats
This was the last Depeche Mode single to have a BONG catalogue number. It had been with us since Leave In Silence, had given its name to the fanclub, appeared on the Strangelove megaphone and was a lovely unique Depeche Mode thing. The BONG prefix is much missed. 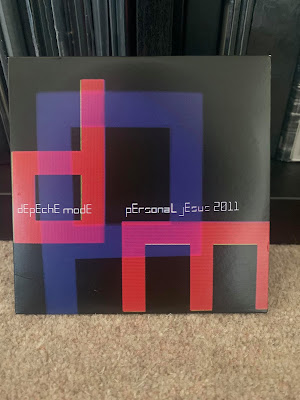 There were only two physical formats available for this release but there was a promo CD too (above). 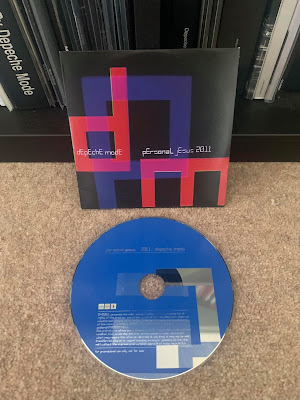 PCDBONG43 is a six track affair. It contains the five tracks we will find on CDBONG43 and adds Personal Jesus (Alex Metric Remix Edit) for good measure. 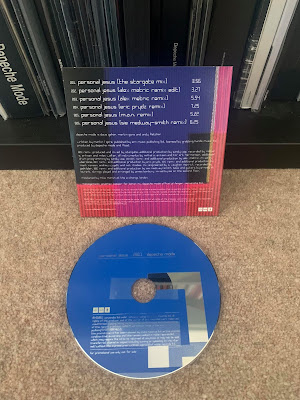 The tracklist features in the photo above. 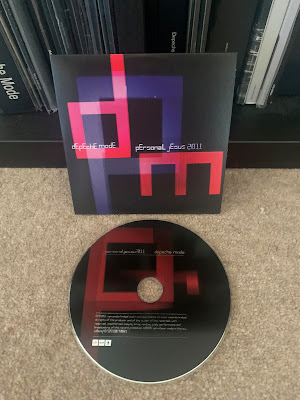 CDBONG43 was the first of the physical releases. 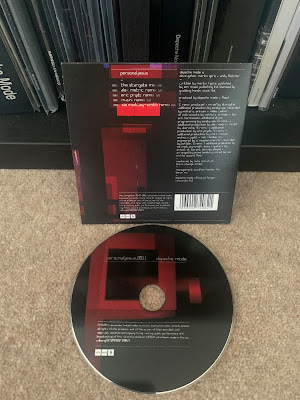 There are five remixes on here, all of Personal Jesus, and they are:
1. The Stargate Mix
2. Alex Metric Remix  - starts off ok but becomes relatively aimless
3. Eric Prydz Remix - no, just no.
4. M.A.N. Remix - this is by Mark Ronson and it's therefore as smug as you'd expect. At least he doesn't drag Bruno Mars into it which is at least something. The backing track, which Nick Rhodes of D**** D**** seems to have had a hand in, sounds like an Erasure B-side from the 90's
5. Sie Medway-Smith Remix - decent enough but a tad long. 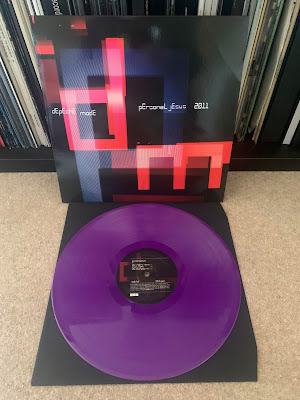 12BONG43 is a lovely purple(ish) coloured vinyl release. It features the same five remixes we found on CDBONG43 but in a different order. On Side A (above), they appear as follows: Alex Metric Remix, M.A.N. Remix and The Stargate Mix. 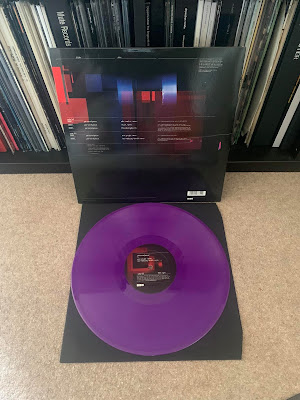 On the B-Side, we have Eric Prydz Remix and Sie Medway-Smith Remix. A second digital release was available featuring all those tracks with the exception of the already digitally released The Stargate Mix.
Elsewhere on earth, it was fairly dull release wise with two exceptions. Promo CD-Rs were available in Denmark (two of them in fact), France and Germany and promo DVD-Rs in Greece and Sweden,  A CD single was released in Taiwan. Once again, it was just CDBONG43 with a sticker in Taiwanese on it.
The first of the interesting releases is from the Ukraine.
The single was released on 12" there in a numbered edition limited to 300 copies with the words "Personal Jesus" written in Ukrainian on the front, back and labels. This one is still on my wantlist. 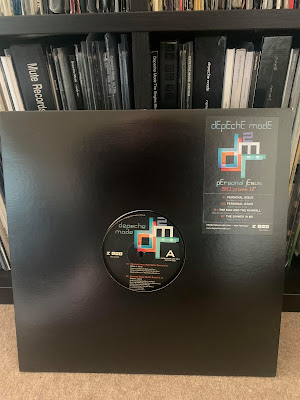 The second interesting release is the US 12". It was given away at certain indepedent stores with the purchase of the 3 CD version of Remixes 2: 81-11. It contains four tracks: 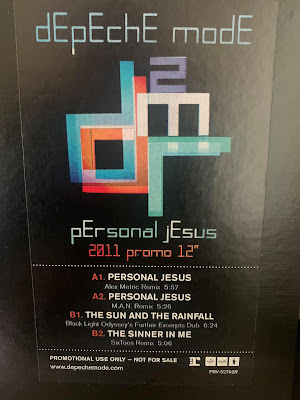 The sticker on the sleeve explains what they are. 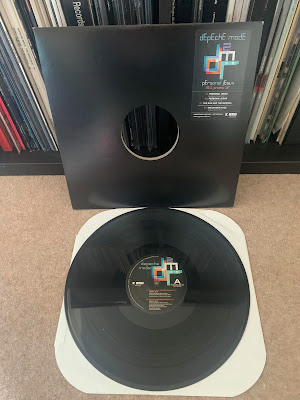 On Side A, we have two remixes of Personal Jesus - Alex Metric Remix and M.A.N. Remix 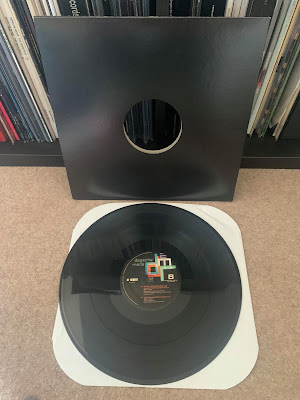 Side B is where the real action is. Despite the sticker saying it features The Sun And The Rainfall (Black Light Odyssey's Further Excerpts Dub) it in fact features the normal version of that remix, not the Dub version. Who cares though as this remix is outstanding. It is a superb remix of a wonderful track and is filled with a love of the song from real fans of the band. Brilliant. No-one will ever be able to rationally explain why this wasn't on the Remixes 2: 81-11 album. Its exclusion was madness.
The other track on Side B is The Sinner In Me (SixToes Remix), another highly enjoyable SixToes take on a Depeche track. 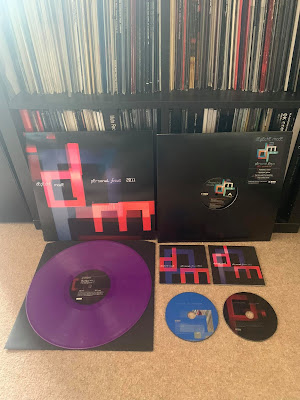