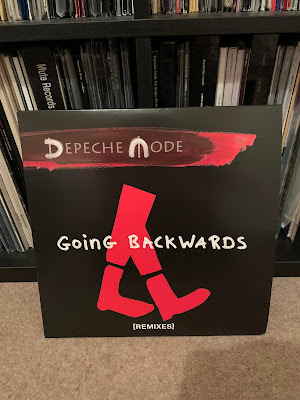 The second single from Spirit was the album's opening track Going Backwards. The song was released digitally and then on two physical formats later on.

As with Where's The Revolution, we got plenty of remixes and we also got a rather enjoyable video. Here's the story of the single.

WE FEEL NOTHING INSIDE - GOING BACKWARDS 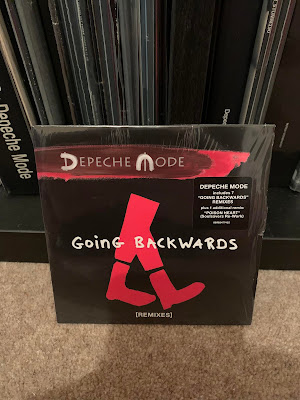 Going Backwards was released digitally on 23rd June 2017 as the Global Spirit Tour was getting into its swing in European stadiums. Physical formats, more of which below, would follow in September 2017 which really does seem a curiously long gap between the two types of release.
The song was one that grabbed a lot of attention when Spirit was released with its lyrics being held up as examples of the band's revived political feel following on from Where's The Revolution.
The Quietus said:
"A mid-tempo, two-chord opener, the track’s ominous overtones and sense of dread are given weight, as Dave Gahan intones, “We have no respect/ We have lost control.” As an opening gambit, it certainly sets the tone for what’s to come from Spirit’s remaining eleven tracks. As the song slowly begins to unfurl, the bass drum kicks in followed by the snare as a skittering riff zig-zags its way over the top. “We’re going backwards,” sings Gahan, his voice portentous and devoid of mirth or joy, “to a caveman mentality” before uttering the coda over and over again, “We feel nothing inside."
Clash Music felt the song set the tone for what was to come on the album:
"From the off, with the edgy, slow-building opener ‘Going Backwards’ – with its trademark bass-heavy rhythms and edgy, nagging melody befitting of a classic Depeche Mode set piece – it's clear that ‘Spirit’ is going to be a challenging listen"
Mixmag loved the song:
"This album gets off to a barnstorming start. Going Backwards (is) among the most anthemic things Depeche Mode have done this century, apocalyptic both in sound and lyrics and perfect for these dark times."
Overall then, Going Backwards was positively received. By this point in their career of course, chart hits in Britain were beneath Depeche Mode, so the single didn't bother the charts here. It did reach number 37 in the US Hot Rock & Alternative Songs chart though. Hot rock indeed.
Going Backwards is a cracking song and was a great start to both the album and the live shows on the Global Spirit Tour. It was good to see Martin on spiky lyrical form and the song packed a punch Depeche Mode had been missing for a while. It was played at all 130 gigs on the Global Spirit Tour and was last heard in Berlin on 25th July 2018.
The Video
The video for the song was filmed at the band's Highline Session in New York in August 2016 and was directed by Timothy Saccenti. The additional musicians you see bobbing around are Kurt Uenala and Matrixxman.
It's an enjoyable enough take on the song and it's interesting to hear a live version without live drums. Dave growls along with his tour pencil moustache in full bloom, Martin does his Martin thing and Fletch is as lovably Flecthlike as ever. There are moody, arty shots of the band too and, beyond that, there's not a great deal to say about it. If only they could have made it fancier somehow. Wait a minute....
Look at that. It's a fancy 360 degree version of the video. You can use the controller on the screen to watch whatever you want in the video. Fancy 5 and a bit minutes of hot Fletch action? Help yourself. Want to watch Dave and nothing but Dave? On you go. Do you want to keep an eye on Matrixxman? Carry on, but you do know Depeche Mode are in the same room too don't you?
It may seem odd that a song bemoaning people being "armed with new technology" used, that's right, new technology to film its video but it's an interesting watch. Compared to the horror shows of the Sounds Of The Universe videos, it's a bloody masterpiece.
The Formats 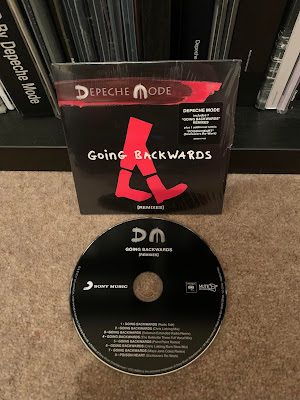 There were once again only two official formats - a CD single and a double 12". The CD single is pictured above. 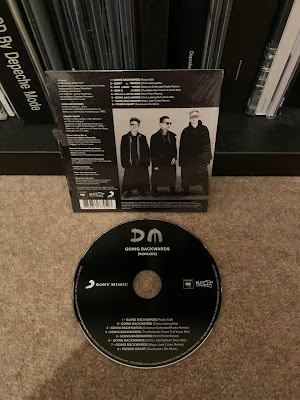 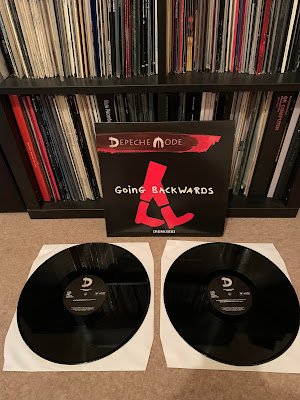 The double vinyl 12" comes in a sleeve with a bigger opening that normal to accomodate both records. Sides A and C (above) have a D on them. 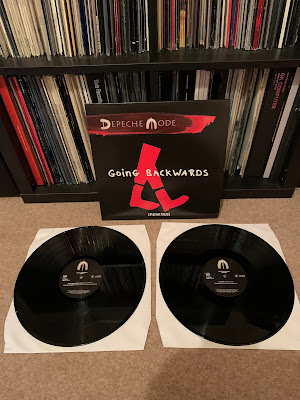 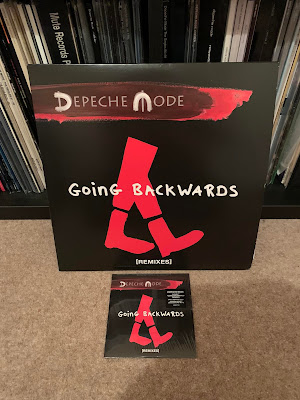 Going Backwards was an interesting choice for a single as it wasn't necessarily the most obvious Spirit track for release but it was punchy enough song. As I mentioned earlier, it was a good album and gig opener and I have a lot of time for the song.
There was one more single to come and, as was now tradition, it would be a Dave written song. The last single from Spirit and indeed the last single in this review project is a cracking song. I'll Cover that (ha ha etc) next time.
Posted by DJM at 17:37