DEPECHE MODE - THEY MAY EVEN BE PERVERTED - SOME GREAT REWARD & 1984

As well as consolidating their position in their homeland, Contsruction Time Again also brought Depeche Mode to the world's attention, especially in Europe. The band were playing bigger venues than ever and their fanbase was growing and growing. The next release by the band then would be crucial for their long term success as they sought to continue to establish themselves and as it turned out they exceeded all expectations. 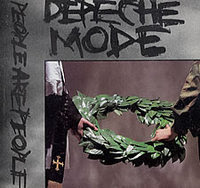 People Are People was released on 12 March 1984 on 7 inch (7BONG5 - right) backed with another Alan Wilder track called In Your Memory. People Are People is a landmark Depeche song given its popularity at the time - it reached a record number 4 in the UK chart, had a huge impact in the US charts and hit number one in Germany. This was a massive step forward for the band and whilst the chart success in the US wouldn't be repeated for some years it le 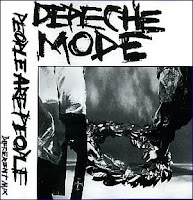 d to them playing much biggers shows than ever before in America and really opened the door for them there. The song itself is good but not their best by any means. In Your Memory is a decent enough track too. Actually given the propensity fo 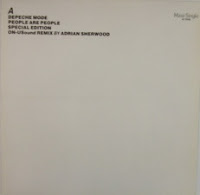 r a plethora of remix by numbers remixes we get these days I really shouldnt complain about In Your Memory. Both were remixed to great effect on the 12" (left - 12BONG5) especially on the Different Mix of People Are People. The Slik Mix of In Your Memory extends the original. Finally a limited edition numbered 12" (L12BONG5 - right) was released featuring the two 7 inch tracks plus the frankly top notch On U Sound Remix of People Are People. It's loud and clangy - that's good enough for me. It's easy to have a go at People Are People for its' cringey lyrics but muscially it's a great tune. The band were still leading the way in sampling in pop music and were making full use of the 64 track Hansa technology. The video (below) showed them on HMS Belfast attempting to play various bits of the ship - as with any video until Anton Corbijn got involved it's to be forgotten about. Once again the German coloured vinyl editions of all three vinyl formats are well worth seeking out with the nicest being the green splatter vinyl for the standard 12". There's also the red vinyl 7" and a red/green marbled vinyl limited edition 12" 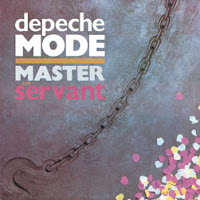 The band's next single was controversial. It's funny to think of it now especially when artists like Rhianna release songs actually called S&M, but Master and Servant's lyrical themes caused much consternation at esteemed homes of family broadcasting such as the BBC. All nonsense really. Released on 20 August 1984, the 7" (7BONG6 - right) was backed with a new track (Set Me Free) Remotivate Me which is by no 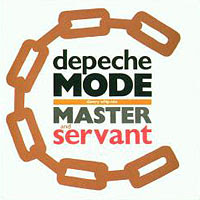 means a classic but again let's not grumble too much. The song was another huge success hitting number 6 in the UK charts despite yet another comedy video featuring chains, a daft dance, more chains, a drill, chains and Martin in chains. The 12" (left- 12BONG6) had a massive three tracks - Master and Servant (Slavery Whip Mix), Set Me Free (Remotivate Me) (Release Mix) and Master and Servant (Voxless). The first track is a cracker - yet another band made remix. The latter two are respectively extended and voiceless and neither are hugely memorable. Another mumbered limited edition 12" was released (L12BONG6 - right) featuring an 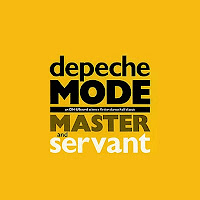 other three tracks. The first was another On USound remix of the title track called Master and Servant (On USound Science Fiction Dance Hall Classic) which like the remix of People Are People is nice and noisy. Track 2 was the frankly baffling Are People People. As even those least familiar with Depeche Mode will guess this was an attempt at a remix of People Are People. I'm sure that there was a point there originally and that one drunken night the remix sounded like it was great but it really isnt. The last track was the 7" version of Set Me Free (Remotivate Me). It's a nice 12" for collectors but it's not one that you'd listen to a huge deal. Master and Servant is a good song and is still very popular amongst DM fans although I guess that's more due to its age and the fondness with which it's looked back on. It was a welcome addition to the Tour of The Universe setlist and much missed when it was dropped. If you want to find a good live version of the song I'd recommend the 101 version. For the German fans a red vinyl 7" and grey marbled vinyl versions of both 12" were released.


Next came the classic album Some Great Reward on 24 September 1984. The album reached number 5 in the U 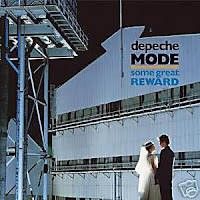 K and was released on LP (STUMM19) and cassette (CSTUMM19). A German grey vinyl edition is available too. SGR is a fantastic album with very little filler to be found in its 9 tracks. Most of the tracks will be familiar to all Depeche fans - Something To Do, Lie To Me, People Are People, It Doesn't Matter, Stories of Old, Somebody, Master and Servant, If You Want (by Alan Wilder) and Blasphemous Rumours. Something To Do and Lie To Me are two of the band's best songs. ALL DM fans love Lie To Me and beg for its inclusion in any live setlist - the live versions of the song from 1984 are fantastic. Something To Do is also a fan favourite (at least of this fan anyway) and stayed in the live set for years even getting a one off outing on the Devotional tour. The weakest songs (although that is harsh to be fair) on the album are It Doesn't Matter and Stories of Old although the latter got a nice reworking on the bonus dvd in the boxset of Sounds of The Universe. Alan's track If You Want is pretty decent too although pushes the whole building site metaphor of the time a little far. Overall it's a great album and one that was hugely successful for the band. A video (STILL no DVD) of the tour punningly entitled The World We Live In and Live In Hamburg is available and is a good watch if only for Dave's ..erm... "dancing". It was their first live video and is worth getting for that alone.

The final single from the album brought condemnation from Church leaders for its God questioning lyrics. I guess the band must have been slightly wary of causing controversy and on 29 October 1984 instead of releasing Blasphemou 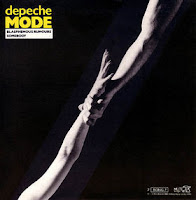 s Rumours as stand alone single they chose to put it out as part of a double A side with Somebody (remix) (7BONG7 - left). The single didnt do too well in comparison to the previous two reaching number 16 in the UK. As well as their first double A side the band also released their first 7" ep (7BO 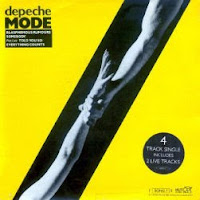 NG7E - right) featuring four tracks - Blasphemous Rumours, Told You So (Live), Somebody (remix) and Everything Counts (live) with both live tracks recorded at the Liverpool Empire Theatre on the tour in support of the album. A 12" was also released (12BONG7 - below left) featuring Blasphemous Rumours and 4 li 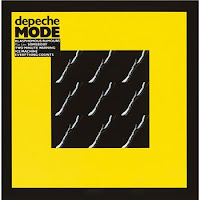 ve tracks from the same concert - Somebody, Two Minute Warning, Ice Machine and Everything Counts. Two German coloured editions of the 12" are available as I discovered the other night when I looked through my record boxes in preparation for this - one yellow and the other grey. There's a red vinyl 7" too. Blasphemous Rumours is a decent enough track albeit a little lightweight despite the message it seeks to get across. It stayed in the live set until 1988 and features on 101 - worth a look for the girl going mental singing along to it at the Pasadena show. Somebody is still much loved despite slightly odd lyrics and is regularly wheeled out by Martin for encores. Finally, there were two videos in support of the song - Blasphemous Rumours looks to recreate their live show of the time and Somebody is Martin singing cut with shots of Alan playing piano and the others walking about moodily.


By the end of the SGR tour in 1985 the band had essentially been on the road for 5 years and were starting to get slightly pissed off with each other. A break was needed and so 1985 meant no new album for the band. It didnt stop them releasing music however as we'll discover next time.
Posted by DJM at 08:32