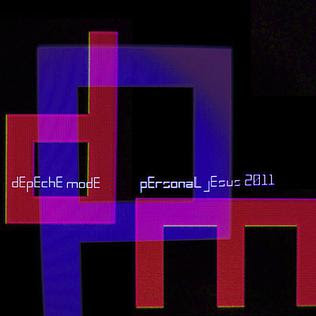 2011 saw the release of a new Remixes compilation following up the decent Remixes 81-04 from a few years before. As with the previous compilation, a classic single was remixed and released to promote the album. On 18 April 2011 the band released a remix of It's Called A Heart to critical acc...hang on...that's not it....no sorry - on 18 April 2011 the band released a remix of Personal Jesus which featured a number of different takes on the track but failed to get beyond number 119 in the UK which was rather disappointing. The song was released on two physical formats in the UK. First up we had CDBONG43 (right) which featured five remixes of Personal Jesus. Track one is the Stargate Mix which was used as the lead version here. It's a good remix and quite enjoyable however the video should be avoided at all costs. The Stargate Mix is followed by the excellent Alex Metric Remix and the ok Eric Prydz Remix. Track 4 is the M.A.N. Remix which is again ok and the final track is the excellent Sie Medway-Smith Remix which is the highlight here. The 12" (12BONG40 - same art as the CD) is a fantastic purple vinyl effort with the same five remixes albeit in a different order - Alex Metric, M.A.N., Stargate, Prydz and Sie Medway-Smith. All in all a decent pack of remixes made all the better with a coloured vinyl release.

The album Remixes 2: 81-11 was released on 3 June 2011 and reached number 24 in the UK. As with the previous remix album we were treated to some brand new remixes and for me the offerings here are far far better than the 2004 ones. The album (all artwork was the same - see left) was released on a single cd (CDMUTEL18), a triple cd in a cardboard sleeve with cd's in slipcases and a booklet (XLCDMUTEL18) and a 6xLP vinyl boxset (MUTEL18). In addition and rather annoyingly additional remixes were made available digitally depending on what site you purchased them from. Unlike other blogs I'll list these mixes but only because it is criminal that one of them was not made generally available. Here are the full tracklistings for each format - I'll make no comment on the old remixes as my other blogs will have covered them already. If you bought the single CD edition you got:

1. Dream On (Bushwacka Tough Guy Edit Mix)
2. Personal Jesus (The Stargate Mix)
3. Suffer Well (M83 Remix)
4. John The Revelator (UNKLE Reconstruction)
5. In Chains (Tigerskin's No Sleep Remix Edit) - A nice mix of In Chains albeit not a groundbreaker
6. Peace (SixToes Remix)
7. Tora! Tora! Tora! (Karlsson & Winnberg Remix) - I love this. Noisy and frankly bizarre in places. How good is it to see a remix of a really old album track?
8. Never Let Me Down Again (Eric Prydz Remix) - a bit repetitive but ok
9. I Want It All (Roland M. Dill Remix) - it improves on the original slightly but that's not too hard to do sadly
10. Wrong (Trentemoller Club Remix)
11. Puppets (Royksopp Remix) - fantatsically brilliantly excellent. You HAVE to hear this one
12. Everything Counts (Oliver Huntemann and Stephan Bodzin Dub)
13. A Pain That I'm Used To (Jacques Lu Cont Remix)

Not a bad collection with the remixes of Tora! Tora! Tora! and Puppets being the highlights of the new mixes here. The 3CD version contains:

Hang on? THE Vince Clarke? THAT ONE? Yes, yes it is. Vince was back on board in a remixing capacity and bloody hell if he didn't nail it. His remix of Behind The Wheel is an almost entirely new take on the song and it is absolutely fantastic. The fact that Vince and Depeche were working together again was mindblowing news and when it worked out so well it was hard to take in. A majestic remix and one of the best of recent time. Top work Vince. Wonder if the remix and the VCMG project means he'll rejoin Depeche Mode.... (of course not)

Ha. Vince Clarke? Next you'll be telling me that Alan Wild....hang on - THE Alan Wilder? THAT ONE? Yes, yes it is. Honestly, this was just getting daft. Vince and Alan? That was such good news and again like Vince's remix, Alan's works and even pilfers from DM's past (I Am You, My Joy). I'm not as crazy about this remix as I am about Vince's mainly because (sacrilege alert) I'm not that into latter day Recoil and its' "Let's make it sound like a long slow version of Songs Of Faith and Devotion" sound however despite that this is a nice remix and it gave most DM fans what they wanted - Alan's involvement. Will he rejoin....no.

All in all, a good collection of remixes with a couple of bland ones but a much more satisfying set of new mixes than the 04 project. For me the highlights are Vince's mix and the mixes of Puppets, Tora! and A Question of Time.

As I mentioned above, if you bought digital versions you got additional tracks. Usually that means you get a live version of an album track or a radio edit of a b-side which is fine as they're mainly unnecessary. It was different here however and that was really rather annoying. The bonuses were:

ITunes
1. Master & Servant (RSS Remix) - at first you think "Bastards - a Master & Servant Remix. I need that" but then you hear it and realise that it doesnt really matter
2. In Chains (Myer v Wilder Deconstruction) - not as good as Alan's Remix

What's annoying about these two is that they are both mixes of well loved album tracks and are both quite good, certainly better than the mixes of I Want It All and Freestate that clog up the main release. It's stupid to shove them away as bonus tracks

And finally, the winner is

HMV
1. The Sun and The Rainfall (Black Light Odyssey's Further Excerpts)
2. The Sinner In Me (Six Toes Remix)

We know all about track 2 and how good it is so there's no need to go into that here. What is staggering and what shows a MASSIVE lack of judgement or even consideration on the band or Mute's part is that the remix of The Sun And The Rainfall is stuck away here as a bonus track on a site that I'm surely barely anyone used. For Christ's sake, that track is one that a majority of fans would STILL love to hear live and is thought of so well by Depeche fans that to not put it on the main album is ridiculous. Add in the fact that it is an amazing remix by people with close ties to Depeche and it just becomes more annoying. I will never understand this. The only way to have a physical verison is if you buy the hugely expensive US Record Store Day Personal Jesus promo 12". Arghhhhhhh

So there we go. The Remixes 2 project was a definite success at least in terms of bringing out new remixes and it features some absolute classics. It's well worth getting if you don't already have it.

As I finish this off we are 4 days away from the release of Delta Machine, the 13th Depeche album. I've been streaming it from ITunes almost non stop and for the first time ever will write a review blog before teh album comes out. That should be up at the weekend. Thanks as ever for reading.
Posted by DJM at 09:16