DEPECHE MODE - A FRAGILE TENSION - SOUNDS OF THE UNIVERSE and 2009

Depeche Mode's albums post Ultra had been a mix of the good (Playing The Angel) and the not so good (Exciter) but there was still much excitement when a new single and album was announced in early 2009. As with the previous campaign, the official site released in studio video snippets in the lead up to the album all of which showed the band making a serious of strange noises via Martin's increasingly gargantuan analogue synth collection. It perhaps indicated that the new songs would be electronic/analogue/synthy sounding and that Depeche would make an almost wholly electronic comeback. Those who thought that (hello) got it, if you'll pardon the rather obvious pun, wrong.

The first new Depeche song in three years physically arrived on 6 April 2009 although after a premiere on a German music awards show, Wrong had been available digitally since 24 February of that year. I mentioned in a previous blog that Precious was a stunning comeback single - Wrong was no different. It is a classic Depeche track. Driving bass, lots of noise, great lyrics and whatsmore in the era of uniformly dreadgful videos, a great video. Wrong just works on every single level. Even non Depeche fans that I know (there aren't that many - I try not to associate with people like that) loved it. When the physical formats arrived the song performed really badly in the UK reaching only number 24 which is clearly a consequence of the song having been available digitally for an age before it's physical arrival. Having just recovered from the shock of seeing a good video, I was then amazed to discover good remixes on the cd singles. CDBONG40 (above left) was a two track affair featuring Wrong and a b-side in the shape of Oh Well (Black Light Odyssey Remix) which is a great remix of the first ever song to be jointly written by Martin (music) and Dave (lyrics).

LCDBONG40 (top right) has Wrong plus 4 remixes. The best remix here is track 2 which is the Trentemoller Club Remix which is an absolute cracker of a remix. The remainder (Thin White Duke remix, Magda's Scallop Funk Mix and D.I.M v Boys Noize Mix) are all fine too and are certainly an improvement on the previous few years' bland set of mixes. There were two vinyl releases too. Firsty there is the standard 12" (12BONG40 - above right) which takes the Magda's, Trentemoller and Thin White Duke remixes from the LCD and adds the ok-ish Caspa Remix of Wrong. The highlight of the release however is the numbered limited edition 7" single (BONG40) which comes in a red with black tints vinyl and features Wrong and Oh Well (Edit). The sleeve adds the phrase "platte im mehrfarbigem vinyl" which is the phrase you'd see on the German 12" coloured vinyl series from the 80's. It roughly means "record in multicoloured vinyl" (please feel free to correct me) and to have it on the front of the record was a fanatastic thing. A picture is below in the Peace review section.

Wrong was a fantastic start to the campaign and the album Sounds Of The Universe (SOTU) quickly followed it on 17 April 2009. Impressively, it reached number 2 in the UK, Depeche's highest chart position since Ultra. The album came in the usual formats of CD (CDSTUMM300), LP (STUMM300 - double vinyl which came with a cd of the album too) and DVD (DVDSTUMM300).

The standard tracklisting is: In Chains (long start to the album and ok), Hole To Feed (Dave written, worst song title ever, poor), Wrong (yay!) Fragile Tension (I like this track - loads don't. It was leaked pre release and because it wasn't Enjoy The Disease of Truth Jesus In My Shoes people got unnecessarily angry. The part where Dave sings "through glittering galas without even trying" harmonised by Martin is a joy to the ears), Little Soul (blah), in Sympathy (just not good), Peace (hmmm), Come Back (Dave's second song of the album and the best of his lot. It's ok), Spacewalker (Hello, I am the pointless instrumental), Perfect (drippy crap), Miles Away/The Truth Is (Dave again, Elvis impressions, stupid song title so named because Martin saw that Madonna had a song called Miles Away, just bloody awful), Jezebel (ok) and Corrupt (the band remember to do something Depeche Mode-ish). Not a great album by any means unfortunately. It's too long and too bland and some of Martin's lyrics are way below the high standard he set. It's overproduced too and really sounds like they should have spent much less time fannying around on ancient Modular synths and instead focussed on sorting out a top notch album. The fact that by the time the tour ended only 4 songs from the album were regularly played (and two of them were Hole To Feed and Miles Away ffs) says a lot. The artwork is lazy too. DVDSTUMM is a black version of the standard sleeve.

The DVD version added the album on dvd for those who wanted to hear how great Spacewalker sounds in 5.1, the Electronic Press Kit, the video for Wrong and three remixes - In Chains (Minilogue's Earth Remix), Little Soul (Thomas Fehlmann Flowing Ambient Remix) and the mighty Jezebel (Six Toes Remix). The latter is fantastic and you really must hear it. 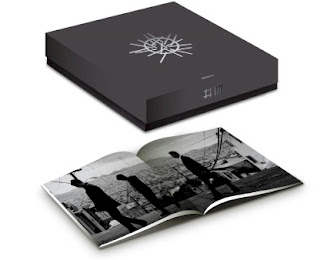 For the first time we Depeche fans were also blessed with a super duper deluxe box set. BXSTUMM300 (right) was filled with a lot of stuff, some pointless, some great. I've only put a picture of the box itself on here - for pics of the rest please visit the excellent depmod.com. As well as a cd of the album the box also conatined a poster, two badges, two books of photos, a certificate of authenticity (for those who were concerned they'd bought a fake box) an envelope containing 6 art cards of which there were 14 to collect and thankfully some fantastic additional music. Tucked away in the box are 3 cd's and a dvd. CD1 is of course the album. CD2 features 5 additional songs and 6 remixes. The hugely frustrating thing about the 5 additional songs is that, Esque apart (another instrumental), they are all the equal of if not better than most of the main album. The songs are Light (a poppy number which is great), The Sun And The Moon And The Stars (a Martin sung ballad sort of song), Ghost (this is classic Depeche Mode. WHY IS IT TUCKED AWAY ON AN EXTRA CD!!!) Esque and Oh Well. The remixes are all decent too - Corrupt (Efdemin Remix), In Chains (Minilogue's Earth Remix), Little Soul (Thomas Fehlmann Flowing Ambient Remix), Perfect (Electronic Periodic Dark Drone Remix) and Wrong (Caspa Remix). The DVD has a 5.1 version of the album and the 5 extra songs as well as two documentaries (Making The Universe and 2009: Usual Thing. Try and Get The Question in Answer), the Electronic Press Kit, the Wrong video and superbly enough 4 live in studio tracks. From SOTU we have Corrupt, Little Soul and Come Back and they are joined by a guitar based version of Stories of Old from Some Great Reward. A random but fanatstic surprise.

The 5 extra songs aside, the real highlight of the boxset is cd3 which contains 14 demos. For years, Depeche demos have been sought after by the Black Swarm. Some have popped up on line (Here Is The House, Shake The Disease etc), some have had official releases albeit with the demo tidied up (Enjoy The Silence (Harmonium), To Have And To Hold (Spanish Taster) and some have been heard by only a select few of which I am sadly not a part. Here however were 15 for us to grab a hold of. They are all Martin sung unless other wise indicated - Little 15, Clean, Sweetest Perfection, Walking In My Shoes, I Feel You, Judas, Surrender, Only When I Lose Myself, Nothing's Impossible (Dave), Corrupt, Peace, Jezebel, Come Back (Dave) and In Chains. Judas is the best one here for me. It was long rumoured to have taken quite a few guises and Alan had even hinted once that it took a reggae turn at one point as the demo here actually proves. It's very far from the brooding genius thte song actually became. To be honest, the demos for the SOTU songs are the least exciting here and whilst it's easy to moan and say "Where are all the demos from everything they've ever done?" we should be pleased with what we got. As an additional cd, the demo disc is a really really good thing. 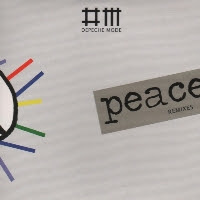 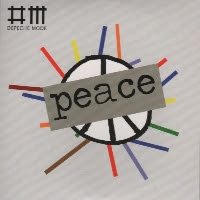 After the album, the next single to be released was, entirely perplpexingly, the dreadful Peace which slipped out almost unnoticed on 15 June 2009. I don't know what the point of this release was really. Even the band seemed to agree by failing to appear in the hideous video. The only sign of them was a poster that is briefly shown. Peace was also the first Depeche single since Dreaming of Me not to have a 12" release. The were only two things that stopped the release of Peace being wholly worthless, the first of which was the 7" coloured vinyl release (BONG41 - see below for my own Peace and Wrong 7" singles) which was on a white/grey vinyl again with a Platte Im Mehrfarbigem Vinyl on the front. The tracks were Peace (single mix) and Come Back (Jonsi Remix) which is of course a remix by Jonsi the lead singer of Sigur Ros and it's a decent enough take on the song. CDBONG41 (above left)  contained the release's other redeeming feature. Alongside the single mix of Peace we had the Six Toes remix of Peace which, like their remix of Jezebel, is a real treat and well worth grabbing. It's so refreshing to hear remixers do something entirely different apoint which is back up by the bland collection of remixes padding out LCDBONG41 (above right) - Single mix, Herve's "Warehouse Frequencies" Remix (blah), Sander Van Doorn Remix (Bleh), Japanese Popstars Remix( best one here and pretty good), Sid Le Rock Remix(Poor at best) and Justus Kohncke Extended Disco Club Vocal (like his Lilian remixes, as bad as the name suggests). Peace matched Dreaming of Me in reaching number 57 in the UK charts. A dismal performance for a dismal single and an insult to the glorious genius of Dreaming Of Me. 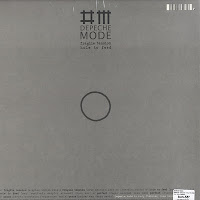 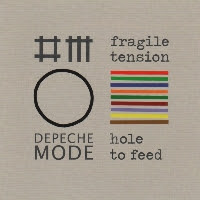 And that was that for the SOTU releases. The Tour of The Universe went on for 102 shows over 5 legs which included a Royal Albert Hall charity show in which Alan stepped onstage to play piano on Somebody which was a lovely moment. The shows I saw were good though the setlist went from its early brave incarnation (Strangelove, Master and Servant, Fly On The Windscree, some songs from SOTU) to a fairly safe setlist by the time the European arena shows rolled around. Still, it's always good to see Depeche live whatever the setlist so no complaint from me.

I'm polishing this off on the day after the new album Delta Machine was announced so my next blog will be out very soon as it will deal with the Remixes 2 album by which point I'll be bang up to date. Thanks again to depechemode.com, depmod.com, depeche-mode.com and to the ever pulsating brain at the heart of the Depeche Mode universe Panos
Posted by DJM at 09:48