This review first appeared on XSNOIZE on 25 September 2014

Has there been a more anticipated release this year? It’s unlikely. The news that the Aphex Twin was returning was greeted by all fans of electronica with unconfined joy and rightly so.  Richard D James is a master of his craft and is peerless in the field of electronic music. From the post rave genius of Selected Ambient Works 85-92, through to the landmark Selected Ambient Works Volume 2 to the frankly terrifying in places Druqks, Aphex Twin has always been a unique artist, forging entire genres through his music 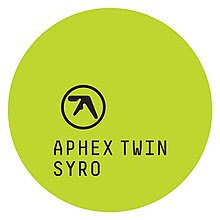 But what of the new music? Will he still be able to stand out from the crowd given the remarkable change in electronic music since Druqks was released? Happily, the answer is yes. Syro does away with the drill and bass terror of Druqks and instead leans more towards the AFX Analord 12” singles released in the early 2000’s. As you would expect, the vast majority of tracks on this album are a blizzard of noise with acid like squelching basslines clashing with seemingly random drum patterns whilst sampled vocals (from Richard, his parents, his wife and his children apparently) float in and out over analogue synth lines beamed in from other planets.

That, however is a very good thing. There are spectacular moments of beauty to be found within the chaos. CIRCLONT6A [141.98] [syrobonkus mix] sounds like a distant relative of Kraftwerk’s Dentaku for example and is all the better for it. Minipops 67 [120.2] [source field mix] is a bubbling electro classic that essentially revisits every genre of electronica that has popped up since Druqks came out, remixes it all and delivers it up on one big platter for you to enjoy. 11 out of the album’s 12 tracks are at times baffling but magical electronic soups so it’s something of a surprise when aisatsana [102] closes the album as it is not a flurry of bass and drums but instead a Brian Eno Music For Airports like ambient piano piece awash with bird song and general loveliness.

So is the Aphex Twin still relevant in 2014? Very much so. Always imitated, never bettered. Syro is an exceptional album.