Blood blood is Davey Gwynne who is one third of blog favourites Machines In Heaven and his new solo release sunday/worship is something that fans of electronic music really have to get their hands on. The album, which was released on 24 August, is available free from the band's bandcamp page right here - http://bloodblood.bandcamp.com/album/sunday-worship 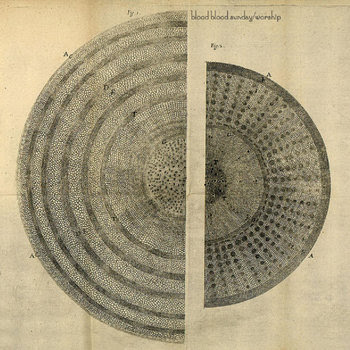 This really is a fascinating and, at times, brilliant album. At various times, you could be listening to Kraftwerk, Recoil, Ghosts era Nine Inch Nails and even Tangerine Dream. Lo-fi electronics clash with full on huge sounding productions, vocals occasionally float in and out, bleeps bleep and when it's all done you want to hear it again. Standouts for me are the Kraftwerk like korzybski, the Eno like leeloo and tribe-hell. The latter sounds in places like a remix of Depeche Mode's Stripped and has a mesmerising lead synth part running all the way through it.
For fans of electronic music, this really is a must. A hugely impressive release. ﻿
﻿
Posted by DJM at 17:41