So here we are. The final award of this award season which is the biggie - Album of the year 2015. The winner this year, which will be revealed shortly, is one of this albums that comes along every so often that grabs you and strikes a chord, causing you to play it over, over and over again. Before we get to that one though, we've 19 other choice cuts to get through and they start with...

20. Mt Doubt - My Past Is A Quiet Beast
The debut album from Edinburgh's Mt Doubt brings to mind the likes of The National and Radiohead before Thom bought a laptop. It's a wonderful record that is enhanced further when you see Mt Doubt live where the songs take on new life and sound stadium sized. Impressive stuff.
http://almostpredictablealmost1.blogspot.co.uk/2015/08/mt-doubt-my-past-is-quiet-beast.html

19. Paper Dollhouse - Aeonflower
The first of three Night School Records entries on this chart, Aeonflower is a dark, ambient electronics that transports you to places you didn't know existed. A fascinating record

18. Woodenbox - Foreign Organ
Foreign Organ was an album that I played a lot this year. It brought to mind the likes of Mercury Rev's Deserter's Songs in places and in More Girl Than Friend, it gave us one of the songs of the year.
http://almostpredictablealmost1.blogspot.co.uk/2015/06/woodenbox-foreign-organ.html

17. Tame Impala - Currents
The move from psych-rock to an almost wholly electronic sound suited this blog as well as Tame Impala. What, on first listen, is a sprawling album, soon turns into a remarkable piece of work and Let It Happen is just one of those songs - very, very special

16. Kill The Waves - The One That Could Have Been
Kill The Waves basically take elements of bands I love (The Cure, Radiohead), add an impressive indiepop sheen to them and create quite wonderful music. As debuts go, this album was as solid a start as you could hope for
http://almostpredictablealmost1.blogspot.co.uk/2015/04/kill-waves-one-that-could-have-been.html

15. Panda Bear - Panda Bear Meets The Grim Reaper
Every time I listen to this record, I hear something new. It's a stunning thing and tracks like Mr Noah are some of the most original music I've heard in years
http://almostpredictablealmost1.blogspot.co.uk/2015/01/panda-bear-panda-bear-meets-grim-reaper.html

Following The Bones Of What You Believe was going to be tricky but Chvrches pulled it off and songs off the quality of the likes of Clearest Blue and Afterglow are quite brilliant. It maybe doesn't have the punch or variety of their debut, but Every Open Eye was a confident, impressive second album.

13. YuTaNi - At The End Of A Day
Another debut album, this time from Connor from Machines In Heaven in solo mode. There's nothing not to love about this record - part ambient, part experimental, all electronic and all lovely
http://almostpredictablealmost1.blogspot.co.uk/2015/07/yutani-at-end-of-day.html

12. Sally Dige - Hard To Please
This collection of intriguing European electronic pop was a real hit with me. Like a darker Yazoo, fronted by Siouxsie Sioux, Berlin based artist Dige produced filled with subtle pop charms.
http://almostpredictablealmost1.blogspot.co.uk/2015/06/sally-dige-hard-to-please.html

11. Turtle - It's a Good Thing
One of Turtle's many releases in a productive year, It's A Good Thing really hit the spot. Part Thom Yorke like experimentation, part pop, part dancefloor, this was a collection of outstanding tunes that confirmed that Turtle is a rare talent
http://almostpredictablealmost1.blogspot.co.uk/2015/09/turtle-its-good-thing.html

10. Hot Chip - Why Make Sense?
This is Hot Chip's best album yet. No fillers, just a focused, punchy album that impresses from start to finish. They sound better than ever
http://almostpredictablealmost1.blogspot.co.uk/2015/05/hot-chip-why-make-sense.html

9. The Deadline Shakes - Zealots
The Deadline Shakes are a Glasgow sextet who make some of the most wonderful music you're going to hear. Not afraid to look for influence among the likes of Sparks or Paul McCartney, they take those influences and add a modern twist to them, producing quite splendid music. Zealots was a real treat and it's an album it's difficult to stop playing. I reviewed it for XS Noize and you can read that below
http://www.xsnoize.com/album-review-the-deadline-shakes-zealots/

8. Miaoux Miaoux - School Of Velocity
In a year of impressive Scottish albums, it's impossible to ignore School Of Velocity. Miaoux Miaoux's sound moved onto a different level with this record and it's as fine an example of electronic pop as you'll hear. Superb.
http://almostpredictablealmost1.blogspot.co.uk/2015/06/miaoux-miaoux-school-of-velocity.html

7. MG -MG
Martin Gore's solo records usually involve a set of beautifully presented cover versions. This time, no doubt inspired by the outstanding VCMG project he undertook with Vince Clarke, he released an album of techno influenced instrumentals that really hit the spot. Europa Hymn was especially beautiful, like a call band to Depeche Mode's most beautiful instrumentals like Agent Orange.

6. Rodney Cromwell - Age Of Anxiety
Do you want outstanding synthpop with a twist of New Order and Kraftwerk? This is for you. Age Of Anxiety is a real favourite of mine and it's a record everyone should hear. Top notch stuff - Barry Was An Arms Dealer may well be one of the great synth pop songs.
http://almostpredictablealmost1.blogspot.co.uk/2015/08/rodney-cromwell-age-of-anxiety.html

5. Apostille - Powerless
Night School Records boss Michael Kasparis unleashes his alter ego Apostille giving us the closest thing there is to a modern Fad Gadget. An incredible record and one I insist everyone on earth listens to
http://almostpredictablealmost1.blogspot.co.uk/2015/04/apostille-powerless.html

4. Beliefs - Leaper
Beliefs produce music that draws much influence from classic shoegaze/late and early 90's indie, bringing to mind acts like The Pixies, Sonic Youth, Ride, My Bloody Valentine and so on. bands you want to hear basically. They add their own twist to it and, with Leaper, they produced a stunning album. Listen to 1992 and tell me I'm wrong
http://almostpredictablealmost1.blogspot.co.uk/2015/11/beliefs-leaper.html

2. New Order - Music Complete
It's a fact that Technique is one of the pillars of music. With Music Complete, New Order essentially nearly matched Technique.  This was a surprise in many ways and what a surprise. Rejuvenated, refreshed and as important as they have ever been
http://almostpredictablealmost1.blogspot.co.uk/2015/11/live-review-new-order-o2-academy.html

And the album of the year is... 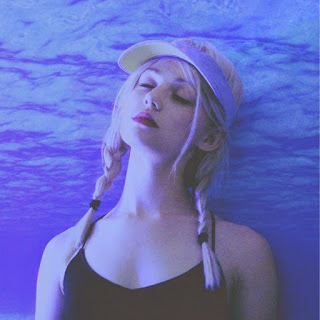 Priest are Madeline Priest and David Kazyk, an Orlando based duo who this year released an album that absolutely blew me away. Priest is a synthpop masterclass, an album that is perfect from start to finish. Using 80's electronic sounds as a reference point, Priest manage to capture all that is wonderful electronic pop and the album is a joy to listen to. The song Waiting For The End To Come is the standout. It's as if someone decided to create the perfect synthpop song - it has everything you'd want and it feels timeless, much like the album as a whole. It's not too often that albums come along that genuinely move you - Priest was one such album and it's a deserved Album of The Year. Madeline took the time ot have a chat about the record and you can read that below. First though, treat your ears to Waiting For The End To Come


APA: Congratulations on winning the Almost Predictable for Best Album . How's 2015 been for you?

MP: Thank you so much! We are honoured. 2015 has been pretty great - between releasing our full length record back in May and our tour in September and early October, we've been pretty stoked about everything, And all our supporters have been amazing, to say the least.

APA: How have you found the reaction to the album - it seems to have gone down very well.

MP: Everyone's reception has been pretty great! That's always a nice feeling. The whole release took a bit longer than originally anticipated, so the wait was difficult because we wanted our fans to hear it. It was worth it in the end though. When we finally released The Game back in February, we were very excited because we felt it was the perfect representation of what we'd been working on and gave an idea of what to expect. The support through shows, blogs, social media and whatnot was overwhelming, but in a good way. It's all very humbling.

APA: The whole album is superb, but if I was only allowed to pick one track it would be Waiting For The End To Come. It feels like a timeless electronic pop song, Tell us a bit about it

MP: That's one of my favourites as well. It's kind of just a longing love song but still has that feel good vibe to it as well. Makes me feel like I'm in an angsty 80's teen movie!

APA: And if you could pick one track from the album, what would that be?

MP: I'd honestly have to pick Waiting For The End To Come. It's so difficult to actually choose because I love Broken and Staring At The Walls as well. I go through phases. Dave would definitely choose White Nights which I also love.

APA; What or who are your songwriting influences?

MP: I've had so many musical influences, past and present. But a lot of times, it's just feelings from experiences, places and people. I just kind of draw inspiration from all over the place.

APA: You toured the US in Autumn this year. How did you enjoy that and what was the response to the gigs?

MP: Yes, we finally had out first little tour! It was a great experience. Dave's hone on tour before, but this was my first time. I'd never been to any of the cities except Atlanta, so it was fun seeing new places. The responses were pretty great, It was so fun meeting people who came to see us and those who didn't, but liked the show anyway. One thing I never announced was that I actually got really sick three or so days in - fever and chills and shit. Luckily we had a few days between shows, so I was able to get somewhat better before performing in Chicago. That was kind of a bummer, but the gigs and people made up for it tenfold. We met so many awesome people and I look forward to going back to each city.

APA: Glasgow where this blog is based is fast developing a reputation for electronic music lead of course by Chvrches who you're no doubt familiar with. Are you a fan?

MP: Of course! I love them! I actually just saw them back at the end of October. They came to Orlando the day after my birthday so that was a present to myself. It was such a fun show - I love Lauren Mayberry.

MP: We have some things in the works, so we are absolutely hoping and planning to do some more touring, and of courtse I would absolutely love to come to the UK. really hoping we can make that happen at some point. But, other than touring, we are working on new material and are very excited about it!

APA: Finally, this blog started life as a Depeche Mode blog, so there has to be a DM question. What's your favourite DM track?

MP: I'm so bad at choosing things like this (see fourth question!) because there are so many good ones, I'd have to say Personal Jesus and Enjoy The Silence. I love both of those videos too.

You can't argue with an DM choice that picks the greatest song of all time ever Enjoy The Silence can you? Thanks very much to Madeline for taking the time to chat. I can't wait to hear what Priest come up with next.

The same goes for all the acts I've featured in this post, the previous 4 Almost Predictables 2015 posts and in all my posts this year. What started off as a place for me to bore the world with endless Depeche chat has turned into something I never thought it would become and, as a result, I've got into so much amazing music both from home and abroad and met so many cool people. I hope that 2016 will see me carry that on and thank you for taking the time to read what write. It means so much to me, genuinely.