With Depeche Mode's new album Spirit imminent and the Global Spirit tour shortly about to start up in Stockholm, I thought it was time to have a look at the band's live history in my home country, Scotland. From when I became a proper fan of the band in 1990 until the Tour Of The Universe gig at Glasgow's SECC on 12 December 2009, I didn't have the chance to see the band play live in Scotland. Before the December 09 gig, the last time they played here was at the Edinburgh Playhouse on 17 January 1988 on the Music For The Masses tour. When you consider they ended up at the Rose Bowl, it's hard to imagine that set being played at such a small venue. More on that gig to come however.

The first part of this blog looks at the band's earliest shows in Scotland, all of which took place in Edinburgh. I've been trying to track down people who have been at every gig Depeche played in Scotland and that's been hard for the early dates. Thankfully, I managed to have a chat with Trevor who saw both the first gig Depeche played in Scotland and the subsequent Speak And Spell tour gig in Edinburgh too. I was put in touch with Trevor via the Depeche Mode Classic Photos And Videos page on Facebook (thanks Andy) and the excellent Depeche Mode Information Service - 1981 page which is of course run by the wonderful Deb Danahay.

7 August 1981, Nite Club, Edinburgh (2 gigs)
The band's first Scottish outing saw them play two shows at the long closed Nite Club in Edinburgh. The venue was situated beside the Edinburgh Playhouse on Greenside Place, Edinburgh and it's long closed though the Playhouse is still there.


The band played two gigs that day - one was an early show ostensibly for Under 18's and the other a later standard show. Sadly, there is no record of a setlist for either show. As both predated Speak And Spell, it's likely that songs like Television Set and The Price Of Love still featured. The show at Rafters in Manchester on 5 August featured them for example (see https://www.depechemode-live.com/wiki/1981-08-05_Rafters,_Manchester,_England,_UK - thanks to DM Live Wiki ). I wonder if the band mixed the sets up at all rather than play two identical ones? A look at other setlists of the time would indicate that's likely. If both sets had been the same, and had we had the internet in those days, you can only imagine the moaning.

This is where Trevor steps in with his first hand evidence.

APA: What made you go and see Depeche Mode at Nite Club?

TT: I was 17 and had, by then, developed a love of electronic music, kick-started by Tubeway Army in 1979, fed by Kraftwerk and developed by the Human League (both incarnations) and OMD. A friend of mine told me about New Life when it was in the lower reaches of the charts, and I’d seen Depeche Mode mentioned in the Indie Charts earlier in the year without paying much notice. I heard New Life on the radio and I thought it was something new – electronic pop, jaunty melodies, accessible and addictive. I also thought it was a great song, and still do! I was also attracted by their attachment to an Indie label – Mute. By that age I was a bit grumpy about the shiny corporate pop machine.


APA: What do you remember about the gig?

TT: Firstly, that it was totally mobbed. The Nite Club wasn’t that big, but it was pretty full. It was also meant to be an early (i.e. no booze and under 18) gig, but there seemed to be plenty of older people! Not that it was a problem. I spent most of the time waiting for them to play New Life but considering I didn’t know any of their songs apart from it and Shout! I really remember Dreaming of Me, Puppets and What’s Your Name? I’m pretty sure they played all of these – I’d bought the Dreaming of Me 7” by then. I definitely remember What’s Your Name?!

APA: Now, from looking at Deb's Depeche Mode Information Service - 1981 page, I see that you managed to see a little bit more Depeche Mode than you bargained for. What's the story there?

TT: I was meant to be going to the gig with my brother, but for some reason I went down to the venue at about 4:30 or 5:00 – I have no idea why. I suppose I was at a loose end. I poked my head ‘round the door and there was this joiner working on something and I mumbled about getting in to see if there was anyone around; he said, well if you go up to the bar and get me a drink of water I suppose you could get in. I think he probably didn’t expect to see me again, but off I go, up to the top of the building and fetch a drink of water for the joiner at the door . . . and there were all these members of Depeche Mode milling around. So, I take the drink down to the man, and run back up. At this point there was Vince, Andy, Martin and Dave mooching around the place.  I didn't want to get booted out so I kind of sat around unobtrusively. I distinctly remember their rider was something like twenty-four cans of Kestrel, which I was a bit dismayed at because even to my untrained palette Kestrel, could only have been described as 'rank'. Not Scottish brewing's finest moment. Anyway, I hung around for the sound check. They ran through a couple of songs; tragically I have no memory of the songs they played but I just thought they were superb. Mainly it was great music played very loud. I remember Dave being in charge of the tape machine. And very little mobility from the other three!

The sound man, who looked INCREDIBLY stressed, was a slightly overweight person with curly unkempt hair and thick rimmed specs. I often wondered who he was; I speculate that it was Daniel Miller but I don’t know. There were hardly any people around – another hanger on, me, the band, “Daniel Miller”, and some bar staff. I think that was all. . . I had my ticket stub, so I got it signed. It was all very unlike me at the time as I was a bit of reserved person, and hardly ever worked up courage to speak to anyone. What I do find remarkable is that three of those skinny 20 year olds are now selling out Olympic stadia all over Europe! And the other is basically a hit factory. . .

Thanks very much to Trevor for sharing all that with us. He didn't make it to the second show but you might have been there or you might know someone who was. If you do, get in touch.

2 November 1981, Coasters, Edinburgh
For the Speak And Spell tour proper, Depeche returned to Edinburgh to play Coasters. Situated at 3 West Tollcross, it's now known as The Cave and has gone from looking like this 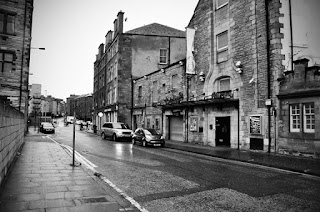 which is a pity. It all seems somewhat livelier in the top picture. Also, as we can see in the picture below from 1982, it doubled as a roller disco. Did Depeche Mode do this? I can only speculate. No (roller) Disco anyone? 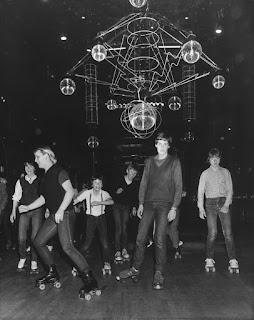 Anyway, luckily for this blog, Trevor remained a fan of Depeche Mode and he attended this gig. I bothered him again and, thankfully for me, he was happy to oblige. I asked him what he remembered of the show - over to Trevor:

"Coasters - 02/11/1981! This is all a bit more sketchy. I wasn't going to go until the very last minute and eventually ended up paying at the door; I lived out of Edinburgh and going in to town on a Monday night in November required a bit of commitment. And it was raining. Coasters was a bigger venue certainly than the Nite Club, but it was by no means massive. The Smiths, New Order, Simple Minds, Soft Cell all played there are I recall those all being sold out. I think I was lucky to get in, because it was really busy (again).

Blancmange were support - I wasn't sure about them at the time, I was more into the up tempo pop Depeche Mode offered then. Subsequently liked them well enough, and saw them at the Nite Club (and there was virtually no one at that - 27 March 1982). I seem to recall DM being more 'suited and booted', although I think Martin had a commando hat and white t-shirt on - distinctly non-corporate. Vincent came on before the gig started (after the support) and made sure everything was in tune - I believe analogue synthesizers have a tendency to go out of tune quite easily. They had a proper stand up reel-to-reel tape machine that made the band seem more complete - not like the one that Dave had to muck around with at the Nite Club.

I distinctly remember Tora! Tora! Tora! because it was somewhat at odds with the rest of the tunes - more a precursor of DM's subsequent career; darker music and subject, delivered by Dave with some passion. Anyway, everyone went home happy (. . . .although a friend of mine, a young lady, stayed on to ahem, 'party'; it would be libel to suggest what went on as I don't really know and I was too shy to ask the next time I saw her - namely the next day. I suspect not much). I think also the band knew Vince was leaving by then. There was a certainly an air of professionalism, lets get the job done. Much more than the more 'informal' nature of the earlier gig. I think they also realised that this could fly or crash and burn.

. . . one remnant. I bought a Moog Rogue in a music shop in Home Street in Edinburgh in 1982, which is just round the corner from Coasters. When I was talking to the geezer in the shop, he said that Depeche Mode had been in when they played Coasters to 'buy a Moog Source'. I don't know if he was spinning me a line because he knew I liked Depeche Mode but Andy Fletcher did have a shiny new Moog at the Coasters gig on 2 November. It may have just been bought that afternoon!"


Sadly, there's no confirmation that I can find anywhere of what setlist was played that night. DM Live Wiki confirms that the gig the following night in Manchester saw them play:

and the following night in Birmingham saw the same set played so it perhaps wasn't too far off that. If anyone can remember what was played or has a recording stashed away then do get in touch.

So that was 1981 and Depeche Mode Live in Scotland. 3 gigs with two on the one day and each one in Edinburgh. They weren't going to stay away for long though as 1982 would see them not only return to Coaster's, but also play their first gigs in Glasgow. I was only 7 at that point so I didn't go, but I've tracked down some people that did. Their story will be told next time.

Thanks very much to Trevor, all the people that do the hard work at Depeche Mode Classic Photos And Videos, Deb at Depeche Mode Information Service 1981 on Facebook and Matthew at DM Live Wiki.