Helen Marnie's solo work to date is a wonderful thing with her debut album Crystal World and standalone single Wolves both must haves in anyone's collection. Her new solo album Strange Words And Weird Wars, released under her solo guise Marnie, is due out on 25 March and it's been preceded by the gorgeous single Alphabet Block.  The track is as fine an examples of synthpop as you'll hear at the moment, showing the many artists who have been influenced by her solo work and, of course, her work with Ladytron, just how this type of music is done.

Mixing a new poppier direction with shoegaze and dream pop influenced electronics, Alphabet Block is a powerful, mesmerising track that demands repeated plays. The verses and the chorus juxtapose perfectly with the former's darker feel giving way to the shimmering space of the chorus magnificently. As you can hear below, Alphabet Block is a special track and one you're going to love. It's a great taster for the album too and that record is going to be one of the must hear releases this year. You don't want to miss it - once again, Glasgow proves itself to be the new home of electronic music.

I had a quick chat with Marnie to find out a bit more about Alphabet Block.

APA: Welcome back Marnie! Alphabet Block is quite a way to announce your return. Tell us a bit about the song.

M: Thank you. It's great to be back! The song is a co-write with producer Jonny Scott. He produced the album Strange Words And Weird Wars and I've been working with him since I wrote Wolves in 2014. I thought Alphabet Block would be a good album opener, a little sneak peak at what to expect. That being said, the album is quite different to Alphabet Block. AB is a wordy little number, which i would describe as shoe-gaze electropop. I love all the swirling guitars and arpeggiators. Lyrically, it's actually really dark. I wrote it at a time of personal uncertainty. However, I think it does come across as warm and that is due to the instrumentation.

APA: The song has a real classic synthpop feel to it. Does the song represent a move towards a poppier sound generally?

M: I would agree with that, yes. It's funny, when I did my last album Crystal World, a few people advised me not to move in that direction. As in, I'd be wrong to do that. So, this is basically my 'fuck you' to them. Nobody should ever tell me what kind of music I should make. I can make my own decisions and create whatever I want. 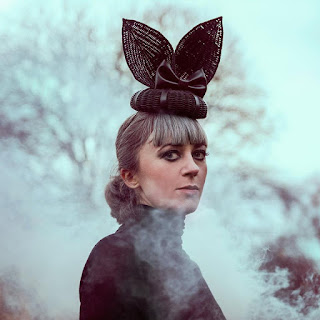 APA: Were there any particular influences in mind when you wrote the track? The chorus has a real dream pop feel to it for example.

M: Because the verses are so lyrically full, it was important for me create some space and depth with the choruses. And I did that be introducing that dreamy vocal feel. Elongating the words. Creating more breath and layering the vocals. The guitars also give a sense of space. I like that the song enters like a club track, but then completely changes and transforms into something different.

APA: Looking forward, your second solo album Strange Words and Weird Wars is out in March. Can we expect a similar, more pop focussed approach?

M: I can't tell you how excited I am to finally have the album coming out. It will be over 2 years in the making. And, as seems is usual with me, not everything went as smoothly as i would've wished. It's definitely a pop effort, there is no denying that. But I think there's also a lot more to it than that. It's intelligent, it's melodic, it's not overly produced, it's guitars, it's synths, it's my voice, and it's a good ride. I'm hoping people will be pleasantly surprised.

Thanks very much to Marnie for taking the time to have a chat. As I've mentioned earlier, Strange Words and Weird Wars is destined to be an album that a lot of you are going to love this year. Alphabet Block is a wonderful way to reintroduce yourself to Marnie.

Strange Words and Weird Wars by Marnie is released on 25 March. Alphabet Block is out now.

(c) Almost Predictable Almost 2017. Not to be reproduced without permission.