Today's review is part 2 of Rachel Blackman's double header. Will her luck change from Bratislava? Will she stay dry? Will she get to see Everything Counts? Ok, if you know the setlist by now, you know the answer to that last one. Anyway, over to Rachel and thank you very much again to her for providing both of these excellent reviews. 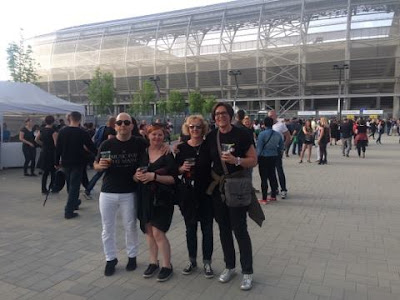 Another day, another city, the Global Spirit continues.

It starts with us getting off the train in the Hungarian capital to find we've been travelling on the same train as F.O.X (one of DM's support bands)! I have the chance to tell them that I enjoyed their set & I'll check them out when home. They seemed to be enjoying the gigs. In Budapest we meet up with Paul & Helen. We first met on the Hansa Studios tour before the Berlin Olympic stadium gig in 2013 & we've had a few gig experiences together since. It's scorching weather again but the first things I buy in the city are a) anti-inflammatory tablets & gel (for my shoulder - see previous review) & b) a rain poncho!! Quite a few DM t shirts can be seen around the city and word reaches that the band are staying at The Ritz Carlton. Whilst sightseeing we just so happen to bump into Peter Gordeno at the back of the hotel trying to go for lunch. I get a pic and whizz it off to Andy McMinn (Depeche Mode Classic Photos And Videos group on Facebook) to then find Paul & Helen saw Martin at the front of the hotel 20minutes earlier! So jealous! Let's get to the gig!

Groupama Arena was easily reached by Metro underground. Apparently it's a newly built football arena and it was pretty impressive. There were helpers to direct you to the right gate from the street. Signs everywhere too. Inside the gates we were delighted to see the merchandise stall was so much cheaper than Bratislava! I grabbed a tour shirt & programme. Refreshments were also great value and it was well organised. A slight downer was our seating situation - I'd picked block C5 as it looked like we'd have a good view of the stage but sadly we couldn't see Anton's screens or Peter and Christian. A lot of people around us were not happy. I was just delighted to be seeing a gig in the dry & pain free (the tablets worked!)

There was a big shower during the support set but it soon passed and the sun came out again. From our seats, we could see how 'up for it' the floor crowd were - they all looked in great SPIRIT. The Raveonettes were just nice background music to me. The now familiar intros were played and then... here's the band. We're on our feet dancing & singing from the word go. For an album I haven't warmed to yet, the songs they've picked from it are catchy and fit the feel of the show. Dave especially embraces the show's mean and moody feel, stomping & snarling around stage at times. And how up for it are the crowd? Bloody loving it! Highlights for me include the unbeatable A Pain That I'm Used To with heavy bass of the Jacques La Cont mix. On a side note both Paul & I are confused as to why Peter plays live bass (which is fab) and not Fletch, who's supposed to be the 'bass player'? Martin's star turn is pretty much perfection - A Question Of Lust, Home (with the band) and later Somebody are sung beautifully and the audience are right in his hand... we're losing our voices singing back!

Poison Heart is a little weak for me but Helen objects and says she loves the lyrics. When Where's The Revolution kicks in it seems to take the audience a little moment to embrace it, maybe after the slower number before? But Wrong really goes down well with the crowd. Then we're on the home run... oh my goodness how good is it to hear Everything Counts again?!!! The audience are now having a party. Stripped - so awesome! Enjoy The Silence is absolutely massive with the crowd and they're going crazy... & then we get Never Let Me Down Again!!! Check out the footage posted by F.O.X on their Facebook page (https://www.facebook.com/diepoero/videos/1695050290799738/) for how amazing the crowd was doing 'the wave. I'm pleased to say my shoulder was fine and I was able to take part!

I'll just pick out "Heroes" of the encores, as I realise my review is rambling on a bit now! My partner Jill turned me onto Bowie for the last 16 years. His death in January really shook us for the whole of 2016, the loss never went away and the awful year of famous people's passing which ended with my father dying in October 2016, was shrouded in black for us. The band's rendition of the song is tasteful, sincere & 'hero' worship at it's best - not overblown. Beautiful. We get I Feel You and Personal Jesus and suddenly we're at the end of the concert. The crowd are absolutely worn out but insatiable - it's a massive party that no one wants to go home from. The band has said goodbye but the crowd stays & chants for ages until the lights are up.

Oh my goodness, Depeche Mode are right on top of their game right now. If they continue this way, and the crowd get right behind them, London is going to go down as one of those memorable DM moments. They can be heroes just for one day....

Footnote: Jill, Paul, Helen & myself get back to the hotel still on an amazing high. We say goodnight. We switch on the tv back in our rooms... we're stunned to see news unfolding of an attack on young concert goers at Manchester Arena! Jill & I are from Manchester. It literally hits home that we've just had the time of our lives listening to live music & so have those teenagers in Manchester. We find out the next morning that 22 of those will never have that experience again...

Thanks very much to Rachel for that. As a Manchester girl, seeing what happened on Monday night must really have struck home. Everyone who contributes to and reads this blog knows what it's like to experience live music, from the life changing thrill of the first gig you go to, to the never ending high of seeing bands blow your mind every time they step on stage. Anyone being senselessly killed partaking in something so special is so wrong, so tragic, that there aren't words to express the sadness Monday's events made me feel.
Posted by DJM at 09:03