The next guest reviewer is Linda Meijer who is an Assistant from DM TV Archives, the wonderful site that gathers and preserves all Depeche Mode's TV and radio appearances for us all to enjoy. Linda specialises in finding all sorts of Depeche goodness and, as well as the Archives site, she also uploads interviews to DM Live Wiki, is a co-moderator of Depeche-Mode.nl and a co-admin of Depeche Mode Classic Photos and Videos on Facebook. Essentially, Linda is a godsend for Depeche fans. I was delighted when she volunteered to review the Antwerp gig.  I know you're going to love this. 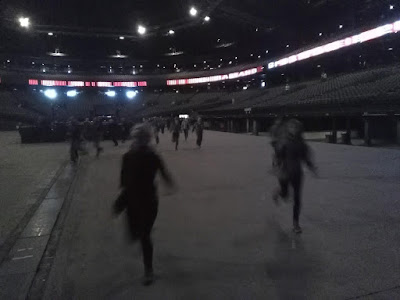 Writing a review of a concert can be hard enough in itself, but when also you have attended another concert two days prior by the same artist which is still fresh in your memory, it is hard to go about writing without comparing the two concerts together. I've been thinking about writing this review without mentioning the concert in Amsterdam whatsoever, but it is impossible for me to so, so unfortunately I will have to make do...

I must admit that my overall experience is a bit spoilt since I had bought Early Entry tickets for both Amsterdam and Antwerp. For those wondering just how relaxed Early Entry is, I will say that it can vary, depending on both the crowd as well as the organisers. In Amsterdam, the people waiting in the Early Entry line were a lot more anxious, and once you start feeling a level of tension in others, it's hard for a group to take it down a notch. By the time we were almost left in, there was some pushing, stepping on people's feet, arguing about who gets to stand in front of whom. It's all a bit silly, of course, when you consider the fact that everyone will get a decent spot anyway. Once inside, we had to form a tight formation which no one was allowed to move away from, and the guards warned us that anyone who starts running will go back outside. So by the time we were at the stage barriers, there was a whole lot of adrenaline going on. In Antwerp, the fans were a lot more relaxed. Our line was supposed to be in the shades, but since we had all written numbers on our hands, we walked about in the sunlight. Once we were let in, we were allowed to walk around and go to the bathrooms or put our stuff in lockers or buy drinks. People respected the numbers on each other's hands a lot more, and so by the time we were front of stage, everyone was feeling amicably with one another.

This amicable feeling, along with the fact that it was my second concert of the tour which meant that I no longer had that typical teenage-ish fangirl "OMG they are back!" sensation that I had in Amsterdam, meant that I could enjoy the concert in Antwerp with a relatively clear mind without needing to shout at the top of my lungs every minute. The fans around me seemed quite relaxed also, which was kind of a bummer for The Raveonettes, since hardly one seemed to be excited about seeing a support act. The crowd was a lot more quiet during their set in Antwerp than in Amsterdam. Or maybe it had more to do with the fact that many of the faces who attended the Antwerp gig were also in Amsterdam where they played the same setlist, and thus they already knew their tricks. 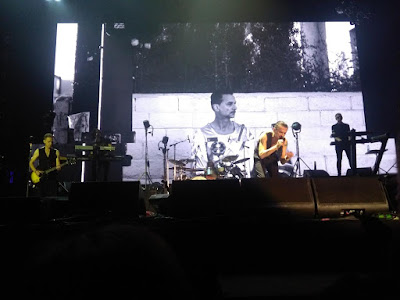 I had landed in the middle part before the stage between Dave and Martin's spots, with only a short girl in front of me, so I had a pretty good spot. The stage actually seemed lower and smaller in the Sportpaleis than in Ziggo Dome, so there was a good view of the entire stage. As usual, the bass comes in pretty strong when you're front row, punching you in the stomach with every beat, so I'm not really able give a proper assessment of the sound quality in the rest of the venue, unfortunately.

Having Going Backwards as the opener was a good decision. It's no intro à la A Pain That I'm Used To, but at least it starts with more of a groove than In Chains and Welcome To My World. Although I feel that Anton's creations are a matter of hit and miss, I think that the colour-splashing backdrop that emerges from the dark really appeals the eye, especially once Dave arrives on the platform, thus forming a black apparition. This time around, Dave showed up in sunglasses, which he took off once he stepped down from the platform. Naturally, he received a warm welcome.


It being Dave Gahan's birthday (55 years old, a "significant birthday"), there were a few fans who thought of celebrating Dave's senior citizen status: apparently a group of fans wore birthday cake-shaped hats which you can see here:

A German woman named Annett had brought some white and red heart balloons with her as well as 4 red balloon letters that spelled "DAVE". She asked us to hold them up while the band was playing So Much Love, going along with the theme of the song. I myself had brought couple of "Happy Birthday" balloons which I had let spread around, as well as two silver balloons for myself that had the shape of number 5, thus forming 55. Since Annett and I were standing second row at the front of the stage, there is a considerable chance that the band saw the balloons... But all of that did not matter much because we were trumped by a French guy who goes by the name "Dave Spirit" who surprisingly managed to spread eight friggin' thousand LED-containing "Happy Birthday Dave Gahan" balloons among a 20.000 sized crowd which were meant to be activated right after So Much Love, thus not only obliterating my and Annett's tiny balloons but also leaving the band visibly in awe as they saw nothing but thousands of red and blue waving lights. Many fans continued to wave the balloons throughout the gig, but it became spectacular again when Peter Gordeno began playing the "Happy Birthday" song on his piano after Martin had performed A Question Of Lust, which cued the audience once again to wave about frantically with their balloons, on which Dave commented "a big party". You can see it here on this video from YouTube (which also shows my mediocre "55" balloon):


All this along with the birthday cake that a bakery delivered to Dave at the venue around twelve-ish, along with skull shaped Belgian chocolates that I had indeed seen in Dave's car as they left their hotel the following day, makes it clear that his birthday certainly wasn't forgotten.


It's hard to gauge the liveliness of the overall crowd when you're pretty much front row, because it can be said that the people at the front are far more active than those in the back. I thought the crowd was quite active: what they lacked in jumping and arm waving in comparison to the crowd in Amsterdam, they made up in singing along to every lyric of every song. Or so it appeared in my vicinity, because although I could hear plenty of people singing along to the chorus of Everything Counts, Dave Gahan was visibly underwhelmed, and at one point started laughing at us and looked at Martin and mouthed something to the effect of "it's not working". Apparently, no matter how many times Dave did the "come on then" hand gesture, the crowd simply wasn't singing loudly enough. But from what I could see of the crowd, everybody was tagging along. It was also clear that many people had not looked at the new setlist yet, because at the start of quite a few songs, noticeably Home, Everything Counts, Somebody and "Heroes", people would only start "woo"-ing once the first lyric had been sung, as a way of saying "Hey I recognise this song!" I do not mean that as critique: it's just one of those things of which you easily forget that not every fan reads every detail about a band every single day until there are no more surprises left. Overall the reception of most slower songs like In Your Room and Martin's solo songs went relatively well, although the classic showstoppers like Personal Jesus and Never Let Me Down Again were of course received best. Even Wrong, of which I don't exactly remember it getting a good reception eight years ago, went down quite well with the crowd. But, understandably, the new Spirit songs Cover Me and Poison Heart, which are very slow songs to boot, did not exactly entice everyone up in the nosebleed sections. But hey, you can't have everything. I was also pleased to see that the amount of smartphones/cameras around me wasn't too obtrusive, meaning that most people seemed to prefer actually seeing the band with their own two eyes rather than through a camera lens, something that Dave has commented on recently (http://www.t-online.de/unterhaltung/musik/id_80664426/musik-dave-gahan-findet-handys-bei-konzerten-nervig.html) 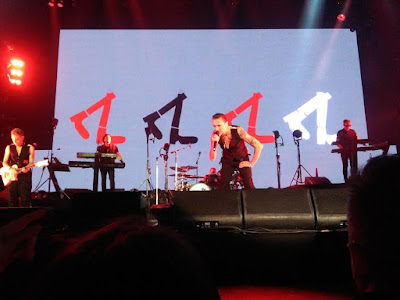 Most eyes were focused on Dave anyway, since Martin did not appear to be particularly attentive to the crowd so far during this tour. The only eye contacts and smiles he makes are during the few moments when Dave is looking at him for eye contact, or when Dave hugs him like he did before Walking In My Shoes. He did smile when he steps on the catwalk during his solo bit, but it had a bit of a "Hey were go again" twang to it. But maybe he has other things on his mind still, like his two newborn children with whom he won't be spending any proper quality time until a year from now. Oh well, at least he was wearing body glitter for the first time this tour, hopefully that will activate his tour-mode soon enough.

Kevin May was also correct in his review of the Amsterdam gig about the crowd's delay in managing to spot Dave up on the higher platform. Not only did it take me a while to find Dave on there, but I could hear the crowd having trouble seeing him on there immediately too. A light on the man there would indeed be best. Speaking of lights, I really like all the lights that shine down on the stage. They especially wowed me during Everything Counts: the light blue lights that swirl on the band sort of reminds me of sunlight that can be seen underwater. As for the screen projections, the aforementioned backdrop for Going Backwards but also the ones for Cover Me and "Heroes" work really well, I think. But, personally speaking, I think the projections for Where's The Revolution and Martin's solo songs are too simplistic and the one for In Your Room is too bright. 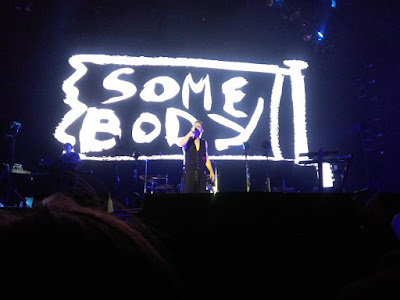 I would say that the concert in Amsterdam was slightly better simply than the one on Antwerp because of Dave Gahan's enormous energy that he exuded during the former. Still, it should be said that comparing Dave's different levels of energy between two gigs is like comparing Mercedes and Ferraris - one might score better on one test, but the other one is still hella good. All the hip shaking, the ball grabbing, the finger pointing, the smiling, overall engaging with the crowd... He could never half-arse it, not even if he tried. And so it still leaves for a very memorable night. That and the eight friggin' thousand balloons.

Thank you very much indeed Linda.
Posted by DJM at 12:11