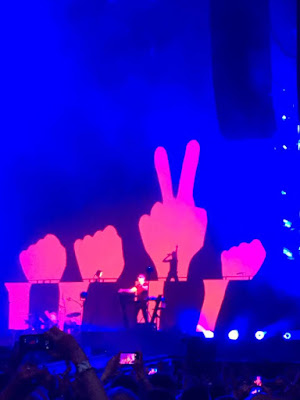 In 1993, I was at Crystal Palace for Depeche Mode's first ever stadium show in the U.K. It was my first Depeche concert and I can still recall the near frenzied atmosphere that greeted the band and persisted throughout the show. Nearly 24 years later, the band played their second U.K. stadium show at the huge London Stadium and I was there with a bunch of my lifelong friends, some of whom, like me in 1993, were experiencing Depeche Mode for the first time. None of us went home disappointed. 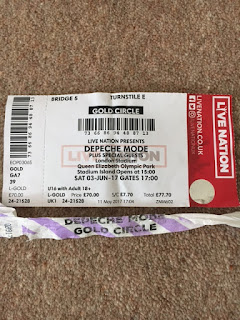 This was a homecoming gig for the band and, according to reports since the gig, the venue was sold out. Whether or not that was the case, and I did see some but not that many empty seats, the crowd was still huge, approaching twice the Crystal Palace crowd of 35,000, and the atmosphere was as good as any of the Depeche gigs I've been too. There was an air of celebration really, with friends old and new, real life and internet based, joining together and embracing a band of whom the late, great John Peel said in 1986 "If we are to have bands filling the world's stadiums, then let them be like Depeche Mode." His quote rang true on Saturday. From hanging around outside the stadium being a geek and looking at everyone's t-shirts, to dancing in the rain to Everything Counts, to the last bar of Personal Jesus,  everything was perfect - a celebration of our band in the best form they have been for years.

The setlist from Saturday is no doubt familiar to fans who have watched this tour unfold since it began in Stockholm in May. I was at that show and loved it, but the ensuing weeks appear to have improved it, with the band on incredible form from the off. The full length version of The Beatles' Revolution got everyone's attention, changing the atmosphere, causing the Black Swarm to focus on the stage en masse. Cover Me (Alt Out) started and the boots began marching towards us on the screen, with Martin, Andy, Christian and Peter appearing on stage as the boots moved away. The fact it was still daylight didn't diminish the powerful, colourful Anton film that backs Going Backwards, and as that lit up, Dave appeared on the platform behind Christian, sunglasses and red jacket on, ready to kick us off. In Stockholm, Going Backwards seemed a little restrained, certainly more so than at the Barrowlands where it sounded like a plane landing, but here it was loud, aggressive and a proper stadium show opener. I was in the Golden Circle area and, with the exception of the two guys in front of me who seemed to have come to the gig to chat to each other, everyone was into it from the off. So Much Love is already feeling like a song that has been part of the band's set for years and it got everyone around me (again apart from the two chatters) bouncing around. I do love the film that backs the song though I did try and pay more attention to the band this time. You could tell that they were loving the gig already, with Dave on fine, grinning form throughout, When you see him engrossed in a show as much as he obviously was on Saturday, I can think of no better frontman around. 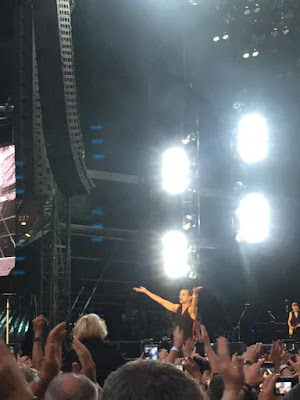 It's very difficult to pick out highlights as I genuinely loved the whole set, although I used Poison Heart to nip across to the other side of the Golden Circle to say hello to blog contributors Amanda and Rachel. I know that's technically talking, but it was while we listened and sung along to the track, so that's fine by me. Hypocrisy eh? The reception certain songs got was incredible - World In My Eyes saw the stadium erupt, even causing Mr Halo, Kevin May, who is suffering after a bike crash, to come into the crowd, crutch in hand to dance along, Depeche Mode as miracle performers. Who'd have thought it? Martin's songs were received like returning heroes. A Question Of Lust and Home are my friend Paul's favourite Martin tracks and he told me the night before over a beer or two that he'd love to hear them. I kept my setlist knowledge quiet and he was elated when Martin's mini set kicked off. The sing along to Home at the end was great too with Martin sprinting around the stage and walkway in that very Martin was, encouraging us all to sing along. I can't recall seeing Martin have as much fun at a gig.

Outdoor concerts in Britain in Summer mean that there is every chance that it will rain and so it did, during two of the night's highpoints, Stripped and Everything Counts. Stripped sounded gargantuan, almost recalling the dark, brooding majesty of the Devotional era version, and I am quite happy to admit I was going crazy during it. The rain added to the song's atmosphere really and then when the downpour continued during an awe inspiring version of Everything Counts, the song seemed to take on an extra dimension, with the whole crowd joining as one joyous, soaking mess, singing along in unison. It was an incredible moment - one I'll never forget. It was followed by Never Let Me Down Again which would have taken the roof off the stadium if it had one. Those three songs are responsible for the fact my voice is still sounding two octaves lower as I screamed along with every word, as did everyone around me. The arm waving section was magnificent too, with the whole ground joining in as far as I could see. Ok, the t-shirt cannon is still happening and I'm still not really a fan of that as it does diminish from the song's climax but, as one of my mates pointed out, would I be moaning if I caught a t-shirt? Would I throw it back? No and no. 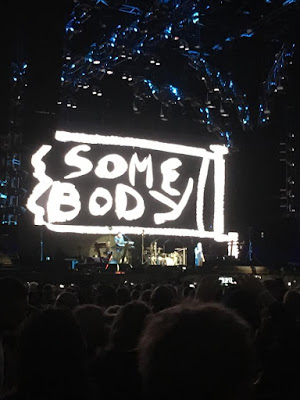 The encore's highlight was definitely the cover of "Heroes" as the whole stadium seemed hypnotised by it, with people in tears around me and, from other reports I've read, all around the ground too. Covers can be tricky, and picking that song is a brave choice, but Depeche do it justice and I love that version. You can tell how special it is for the band too - Dave's reaction on Saturday showed that. The closing Personal Jesus wrapped the show up perfectly, on a huge high, and there can only be very few people who left the concert unhappy. All of my friends, from experienced fellow Depeche travelers John, John and Andrew, to second timer Paul and debutants Stuart, Jamie and Ruth loved it and latter four were all confirmed as full on Devotees. They'll be back to see Depeche Mode, as will I and almost everyone who was at that gig. When a band that has been the sound track to your life are still capable of producing albums like Spirit and playing shows like Saturday's show with the gusto of a band half their age, it is truly something to celebrate.

Thank you Depeche Mode. That was a special concert. 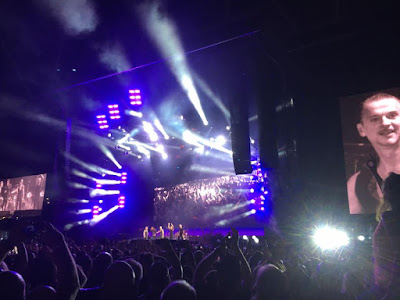 Firstly, a quick hello to everyone one I bumped into including Sarah, Amanda, Sue, Rachel, Matt, Scott, Julien, Simon, Emma, Helen, Kevin, Melvin, Moto and the other people whose names I have embarrassingly forgotten. It was so cool to see you all. Sorry I didn't get a chance to catch up with the masses of other people I wanted to see. Next time!

Secondly, for the second time on this tour, we leave a gig to hear of another terrorist attack in Britain and this time it was not too far away from where we all were. Manchester's horrific events didn't stop 70,000 or so from going to Saturday's gig, and nor will Saturday's events stop people going out either. It's not in this blog's remit to talk politics so I won't but I'm so glad that everyone made it home safely from the concert, though that gladness is balanced by sadness for all those lost and injured around London Bridge. I really hope I don't have to footnote any other review of this tour, or indeed of any other tour, to mark yet more senseless killing.
Posted by DJM at 14:49