Ana Soto returns to the blog for her second review of the first leg following her wonderful Milan review from 27 June (here). The number of gigs Ana has been to on the first leg has made me exceptionally envious so I'm delighted she's agreed to write another review. Remember to check out Depeche Mode Mexico's Facebook page (here) as it's full of wonderful things. Thank you very much Ana for the review and the wonderful pictures and videos.

“Warsaw you really are the best!”


It was almost easy to anticipate this level of passion for the band, just the afternoon of the day before the concert there were already the first 20 fans waiting in line for the show. And the next day the Early Entry queue had at least 600 people ready to go inside, while in other cities the EE line had 100 fans or less waiting. That says everything.

The night of July 21th inside the PGE Narodowy stadium the fans are so excited that they even sing very loud the fragment of Where’s The Revolution when the Hublot/charity:water spot is showed in the screens.

They know it’s just question of time until they finally see Depeche Mode live, almost at the end of the tour. They have been waiting their turn for more than two months.

From the first rows we see through the black mesh that hangs under the stage when Martin, Andy, Dave and their team walk across the tunnel, then everybody in the stadium yells excited, it’s like every single one could see them walking behind the stage. 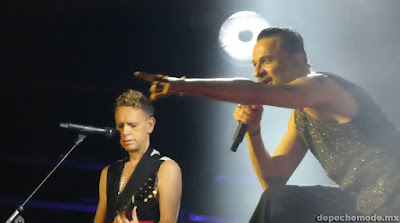 Suddenly dozens of red ballons fly around the stage to say welcome to Depeche Mode. Those ballons were supposed to be used during So Much Love and Where’s The Revolution” but it seems like nobody could wait to show to the band how happy they are for having them back in Poland.

All this level of excitement is maintained throughout the concert, but when Everything Counts comes just reaches a new level. I can’t help but think that this songs make us feel for a moment that we are in 1988, inside the Rose Bowl, singing once and again “The grabbing hands, grab all they can everything counts in large amounts”.

Then during Walking In My Shoes,I again think about that legendary night of the 101 concert when for a moment Martin looks Dave straight in the eye and smiles, just like they did it 29 years ago while singing Behind The Wheel.

Dave puts so much energy and passion during Walking In My Shoes that he needs to remove a lot of sweat from both eyes. Once that's done he is ready to show off his boots as he does each night - this time are the silver glitter boots.

At the end of the song, the fans sing “the new thing” (tup-turup-turup, tup-turup-turup), Dave uses the moment to take a facial tissue and carefully he cleans all the sweat around his face, then he throws it to the audience. In the front row many arms try to reach the paper, but sadly it goes straight to the floor and nobody brings home the ultimate souvenir. 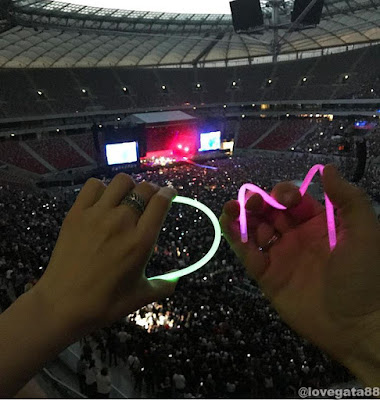 Yes, this was another great show. Personally it was amazing to witness the good health and great condition of Dave Gahan. Even after seeing the videos of his performance in Kiev is hard to believe that this is the same man that just some days ago spent the night in a small bed of a very simple room at the hospital. So soon after that, he is there again being some kind of god for a couple of hours, delivering music to the masses together with Martin and the good Fletch.