This review was written by Jenny Wilson Siklos from Madison, Wisconsin who is a long time Depeche fan and was chosen to be one of the band's Facebook Takeoverees this year. Jenny's written a great piece, capturing how much she loved the gig.The photos are all hers except where otherwise credited. Enjoy!

I have written before about how Depeche Mode had been my personal holy grail of concerts. Having loved this band for over 30 years, I had still not had the chance to see them. Tours tended to come through our town in the summers, while I was usually away, or doing something else, like travelling, or, later, having babies, meaning years of frustration. That all came to an end this week, when I finally got to see my favourite band of all time, with my dear friend Melissa and my eldest son, Oszkár.

We arrived just as Warpaint were finishing their last few songs… I’m sad that we were stuck in the mess of getting into the venue and missed most of their set, they appear to be a great band.

The anticipation I was feeling, the relief, at finally being there, was overwhelming. I was happy to have The Beatles’ Revolution start playing to almost give me a breather to gather my thoughts before the band arrived. I was in a state of extreme excitement… I hadn’t seen Dave, Martin, and Fletch in person (though I had met Alan Wilder years earlier), and it was such a thrill. Finally, there was Dave, my favourite living singer in the flesh. 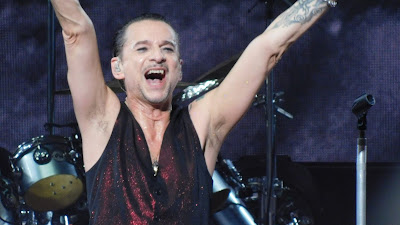 The elevated catwalk that ran the length of the main stage video screens allowed Dave to dance and play with his silhouette against the backdrop of the modern art imagery in Going Backwards and other songs… it was a lovely effect that I hadn’t seen done for quite some time… (perhaps during one of the U2 tours?)

They went on to rip through dramatic renditions of Barrel Of A Gun, A Pain That I’m Used To, and then surprised me with Corrupt, which is about the sexiest song I’ve ever heard in my life. But it was when In Your Room landed, that I lost it a bit. The incredible visual of a woman on a sofa, invited to dance with a partner that enters the room, distracted me at first. But then, the orchestral depth of the song, the dramatic layering, the lust and longing, the memories of how that song has soothed me, in the dark, in the low moments of my 20s, I began to cry with a deep gratitude. There I was, with my son and my friend, sharing in this joyful moment of the music I love so very dearly. That was the moment I had hoped for… one that I will never, ever forget.

The visuals for this show were lovely from the beginning. From marching boots, to a beautiful modern art backdrop that morphed in and out of live shots from the show and audience to videos of Dave and short art films, the visuals were stunning and no doubt added greatly to the experience of those in the back. Another incredible moment of visuals and music was Cover Me, when Dave is an astronaut. The song, an atmospheric song that conjures up the big skies at night, plays beautifully live. To me, it is the best moment on Spirit.


Martin’s moments in A Question Of Lust, Home, and Somebody, were absolutely lovely. As my personal focus is so heavily on Dave and his vocals, I regularly fail to appreciate what a great and unusual singer Martin is (I am, always, aware of Martin’s wonderful songwriting abilities, of course). It was such a pleasure to hear him in these quieter moments, which, surprisingly for me, were some of the most special of the evening.

Stripped is probably my favourite song by Depeche Mode. When they did it, they chose to focus just on the song, with a bare bones visual backdrop of painted stripes. I was very glad for it, as it allowed us to focus on our own vocals, which Dave encouraged right away. Hearing the crowd sing the lyrics so knowingly was such a treat. As it is a much older, lesser known song, I wasn’t sure how many in the crowd would know the words. The ability to sing the words is always an insight into just how much a song means to an audience, and it’s always so heartening when it’s one that was never on mainstream radio, and full of such dark themes and longings. In a weird way, it gave me a great deal of hope, as if we were all in on the same beautiful secret. 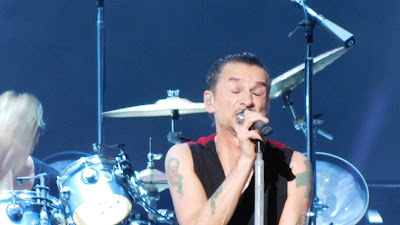 Another wonderful moment that moved me deeply was their cover of David Bowie’s "Heroes". Like many fans, I know that David was both Dave and Martin’s personal hero. This is true of so many alternative artists. For me, David Bowie is beyond a rock star… he is a cultural and heritage icon, an artist of the purest intent and in the truest sense, who by all reports had a delightful sense of humor even up to the end. I have so enjoyed all the beautiful tributes from so many musicians that have come in the wake of Bowie’s death. I love moments of respect between generations and influences in all of the arts, but especially in music, where the connections are so visceral. I was especially touched by Dave taking on some of Bowie’s signature stage moves…

This show was an absolute joy to experience. The very best aspect of it for me, as I had expected, was the stage presence of Dave Gahan. I can’t think of another front man (other than Jagger) that has had this much fun, for this long, on stage. He looked happy, relaxed, and into their music. He danced, frolicked, played, seduced, and did it all in over-the-top, rock and roll style. Though alternative music is my thing, it is far too often taken much too seriously by the bands who play it. How utterly refreshing to see a lead singer have so such damn good fun on stage. Thank you, gentlemen, for an unforgettable evening!