After four record setting nights at the Hollywood Bowl, Depeche Mode finally left Los Angeles and headed to Seattle for a show at the Key Arena. Would we see a repeat of the varied setlists we saw in L.A or would we go back to the tried and trusted setlist that's been played at most shows on the tour? Stacy Lynch from Kent, Washington was there and here's her superb review of how the night unfolded. All photos are hers too so don't steal them without asking nicely. Enjoy. 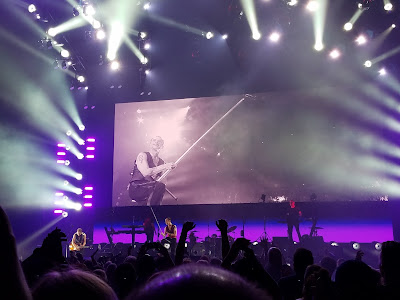 A little about me: I became a fan of Depeche Mode at the age of 12. It was 1984 and I had been bitten by the Depeche Mode bug. By 13 I was devoted with no way to shake the disease. At 15, I got to go to my first DM concert and it was magical. Nearly 30 years later, the live magic is still there.

Now, I’d like to say that I haven’t missed a tour since that day in 1988, but unfortunately that’s not the case. After seeing two shows on the World Violation tour, I did not have a chance to see Depeche Mode live again until 2001 – a show that turned me into that 15 year old girl all over again. 4 years later, another tour, another show. 4 years after that, another. 4 years after that…nothing. Depeche Mode did not come to Seattle. They didn’t play anywhere in the Pacific Northwest. They didn’t come to me and I couldn’t go to them. I was heartbroken. But this is how much they are a part of me. Having to miss them is like missing a piece of myself. It's hard. 8 long years since my last show and I was more than ready for October 21, 2017. Each of the 6 DM shows I’ve been to over the last 29 years (plus 2 additional solo Dave shows) have been special. Show 7 was, well, beyond anything I could have ever imagined. 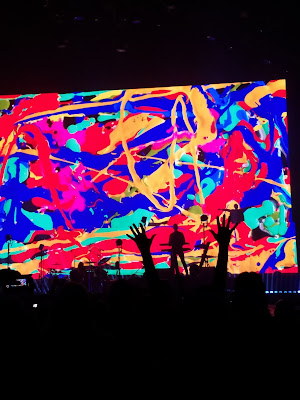 The show: We had row 16 floor seats on Fletch’s side of the stage. We were just 6 rows from the end of the catwalk. Realizing this, I knew I’d be in for some special Dave moments. I was afraid, as a not too tall of a person, that I would have a hard time seeing the stage, but I knew I’d be able to see the catwalk. Fortunately, there were like-sized people in front of me, so the stage was in pretty perfect view too!

After an epic 4 shows at the Hollywood Bowl with incredible twists & turns in the set list, I figured they would probably return to the original set list in Seattle. I was right. And because of this, I am not going to song by song, but rather emotion by emotion. 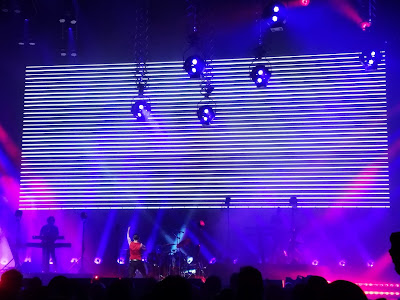 Just walking to our seats started to get me emotional. I had so many years of anticipation built up. I was about to burst. Once the lights went down and The Beatles Revolution intro music began, I couldn’t contain myself any longer. I was jumping. I was screaming. I was ready. Oh, was I ready.

The band came out, Going Backwards began, and the tears started to flow. I couldn’t help it. And I couldn’t stop it. I spent the majority of the song wiping tears from my eyes. It’s a reaction you only understand if you have that special attachment to a band. And I know my fellow devotees understand.

By the time So Much Love began, I was just in excitement mode. Pure, unadulterated joy mode. I sang and danced and screamed and squealed song after song. And I wasn’t alone. Seattle and the Pacific Northwest, in it’s very nature, is a pretty laid back area. People don’t get too hyped. Even if they are having the time of their life, there is a general sense of calm amongst us. Not this night. This night was different. This crowd was ON. The band was ON. 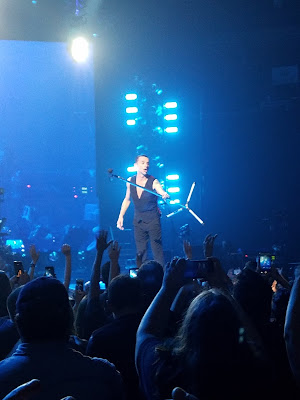 Song by song Dave was into it. He was smiling. He was wooing. He was dancing. He was pointing. His grabbing hands were grabbing all they can. Martin was just as lively. And Fletch was his enjoyably happy hand waving and clapping self. It was so fun to watch. Just as we fed off of their energy, they fed off of ours. The sing-a-longs during Everything Counts, Enjoy The Silence, Never Let Me Down Again, Home, Somebody, Walking In My Shows, Stripped, Barrel Of A Gun, and so on were awesome. I was proud of our crowd.

Cover Me. I was looking forward to this one. It was everything I had hoped it to be and more. It’s the only song I recorded. It was beautiful. It was emotional. It set me up for the next round of tears – Home. 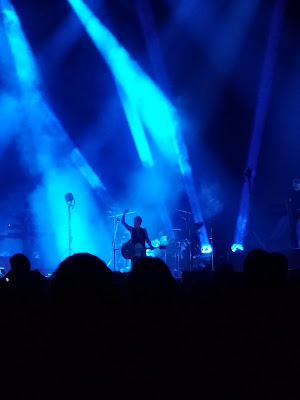 This one always makes me tear up when I hear it live. This time it was a bit more special. Not only did I sing along for myself, but I sang along for my friend and fellow devotee Missy VanSlyke, who passed away in February. I cried. And at the end, I yelled out “this is for you Missy!”

Stripped. Good Gahan. Do I even need to say anything about the power of this song? 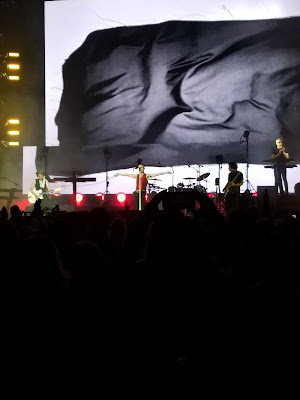 I put my all into this show. So much so that by the end of Enjoy The Silence, I felt like I was going to pass out. I was over heated and under hydrated. My body felt like it was going to give out. I was able to drink a bit of water and I held on through NLMDA and the first song of the encore, Somebody. By Walking In My Shoes, I had to sit down. I could barely stand in my own shoes, let alone walk in theirs. After fanning myself and drinking a little more water, I was back up for "Heroes." I had to be up for "Heroes". This is my favorite Bowie song, and to hear one David pay such a beautiful tribute to another David filled my soul.

After the final two songs, I Feel You and Personal Jesus, the band said their goodbyes, took their bows, and left the stage, but the energy in the arena remained. For me the energy remained for the entire hour and a half drive home in the rain and wind. And it remained at 3am, when I was still awake, trying to get to sleep. I’m pretty sure it will remain with me for a very long time. Perhaps another 4 years. 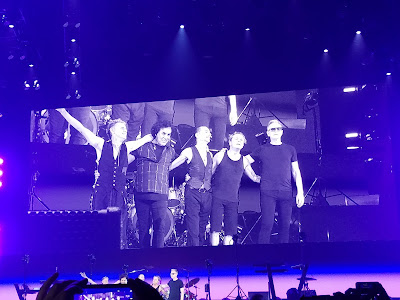