Tragically, this is the third review in this project that is written with a senseless massacre as its backdrop. As with the London attack in June on the night Depeche played the Olympic Stadium, the Devotee masses were close to unspeakable events costing tens of people their lives. In Las Vegas, concert goers lost their lives needlessly and horribly -  concert goers just like us, just like the Depeche fans who were at the T-Mobile Arena the night before and, tragically, the Ariana Grande fans who died in Manchester. To have one such event over any year is horrible, to have two beyond belief. I guess writing a blog that deals with a set of events over a year is going to be affected by external factors, but this blog's connection to people all over the world who are all connected by music really does make these events stand out as stark reminders of the random tragedies that can affect us all. Mercifully, none of the Depeche fans who traveled to the Las Vegas show were caught up in events there. That may be a trivial concern when weighed against the loss of innocent lives and it's probably irrelevant in the grand scheme of things, but I felt I had to mention it. Apologies if this is a clumsy intro to what is a wonderfully written and poignant review, but I couldn't not say something.

Anyway, Mads Kruse says all the above better than I can in this review. He sums up the joy of a Depeche Mode gig perfectly, as he would have done anyway, but reflects on what happened the next day too. Thanks very much for this Mads. On a different note, it's nice to have Mads join the ranks of Liverpool FC fans reviewing gigs for this project, following me and Chris Snoddon. I think that makes it Liverpool 3 Man Utd 2 in terms of reviewers. Just as it should be ;)

This review has been very difficult for me to write, and I've started over countless times. Because, how do you even begin to describe going from the wonderful emotional high after the DM show in Vegas, and then less than 24 hours later, seeing people killed and injured at another concert in the same city, worrying about the safety and whereabouts of friends in the area.

I guess I'm still in a state of disbelief that this even happened, as it seems so surreal that someone can come up with such a calculated and evil plan and go through with it, with no regard to the consequences. Destroying hundreds of lives of people just there to celebrate music.

We are indeed going backwards, watching men die in real time...but Martin Gore: We DO feel something inside.

However, the review of the show must go on, so we'll rewind to Saturday evening, when everything is still innocent and happy.

I had been looking forward to the Vegas show since it was announced, as I always have DM-visits to Sin City on my "Must Go"-list.

For some reason, they've always shied away from the arenas there, picking small intimate venues with GA, like The Joint at Hard Rock Hotel and The Pearl at Palms (excluding their first Vegas show in 1994 at the Aladdin Theater, holding 7,500).

So although they bowed down to the almighty dollar for The Global Spirit Tour and booked T-Mobile Arena seating approximately 15,000 people, I still had high hopes for an excellent show.

Approaching the arena, you see the humongous LCD marquee outside over the main entrance displaying the DM Global Spirit Tour Poster, and if that wasn’t getting you into the right mood, the surrounding area called The Park, with plenty of selections of "hydration" and live music would.

We arrived and entered early, as we had VIP tickets, so we didn't see the crowds assemble, but I can imagine it was pretty entertaining outside.

After the VIP reception, we found our seats, and watched the opening act Warpaint.

Since I was at the Salt Lake City show, I'd already seen them, and I insisted on my wife and two other friends should sit down and see them, because I think they're great.

You could see a lot of head bobbing among the crowd already seated, even is they weren't exactly watching the four girls play.

The arena fills up, and Beatles' Revolution starts playing.

Personally, I'm not a big fan of that opening, so I'm happy when the boots starts marching to the beat of Cover Me, and we can get on with the show.

Set list is no longer a surprise, and there's no need to go through the songs one by one, so instead, I'll list a couple of observations from my (somewhat inebriated) memory of the show. 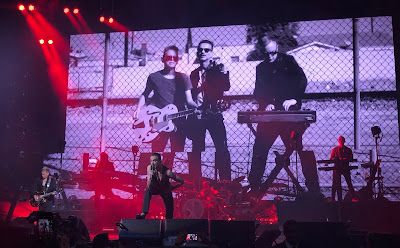 First of all, I was there with a DM virgin, so I was keeping a close eye on him and his reaction.

I could tell from the first cord, that he was blown away by the sound quality and the clarity of Dave's vocal.

I remember from Salt Lake City, how I was surprised too, after having watched so many muddled YouTube videos, where it sometimes sounded like Dave was out of tune. Not live. Dave was spot on! 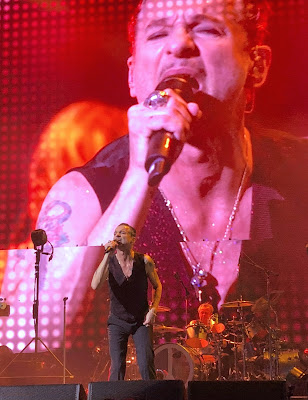 My friend was stomping at So Much Love, confused during A Barrel Of A Gun, feeling the sex in Corrupt and grooving with the Jacques Lu Cont's remix version of A Pain That I'm Used To. Add the opener Going Backwards, and DM had in just five songs already shown him a glimpse of their wide range.

From where we were seated, 5th row center stage, the crowd energy was superb. Lots of fans were surrounding us. There were lots of singing and dancing. The heavy price tag of the tickets was happily forgotten.

After the beautiful Cover Me and while waiting for Martin to sing his first two songs, a guy somewhere behind me immediately gained unlimited street cred by shouting for Boys Say Go. I responded with my request for The Sun And The Rainfall, surprisingly to no avail.

After Martin finished Home there were sporadic attempts for the sing-along, but Dave has already accepted it ain't worth it in the States, so he just thanks Martin and introduces Peter, Christian and Fletch. Too bad, because it's really a magic moment when it works.

Next follows my restroom break. Poison Heart does nothing for me, so it gives me a chance to unload and refill. That usually brings me back in my seat in time for Where's The Revolution, giving me a couple of songs to get ready for the show to go in over drive.

I don't know who's responsible for the new intro to Everything Counts, maybe musical director Kerry Hopwood? But whoever it is, he or she deserves a medal.

It's amazing and right down my alley. Imagine if they went straight into Get The Balance Right after the grabbing hands sing along is over. They could totally do it when Dave signals to Christian to start hitting the bass drum during the sing along.

Sorry, I went off on a tangent there. Back to the show. 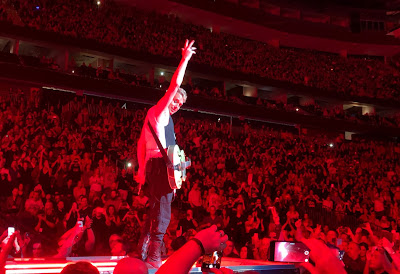 It's funny how Dave and Peter during Everything Counts almost heckle Martin before Martin's first keyboard part comes up. He has messed that up a couple of times on the tour, so now, they almost freeze, while staring intensely at him, waiting to see if he gets it right. Then everyone laughs.

The arena is jumping (from my vantage point, anyway) through Stripped, Enjoy The Silence and Never Let Me Down Again. What a way to end the main set, but I could definitely do without the shirt gun. It's taking too much away from the most iconic and sacred Depeche Mode moment/ritual.

Before the encore, the arena lit up with cell phone lights. Appropriate for what Martin was to deliver next. Somebody always goes down incredibly well in the States considering it is a ballad sung at a large arena show.

I think they could easily swap "Heroes" and Walking In My Shoes, and get a better flow in the encore, but that's just me.

Personal Jesus is the perfect end to a great show. The crowd hopes for more, but it's "See You Next Time", and the lights come on.

My virgin friend took his time as we left the arena, and I had asked him what his overall thoughts were on the show and the band.

After being in deep thought for a while, he came up with the following nugget: "No one else plays music like this. I don't really know how else to describe it".

I just nodded, and smiled. He got Depeched.