Cecilia Castro from Buenos Aires is today's reviewer. She has been on something of her own Global Spirit Tour, following Depeche around Europe on the winter leg and the fact she went to both Milan gigs is enough to make me jealous. I imagine the Dave fans among you will feel jealous too when you read this blog and just how close Cecilia got to Mr Gahan.  Like me, Cecilia is also a Depeche Mode Facebook Takeoveree. She did Day 61 and you can check out her posts over on the DM Facebook page. Thanks very much to Cecilia for this great review and for the photos. Enjoy the Buenos Aires show next month! 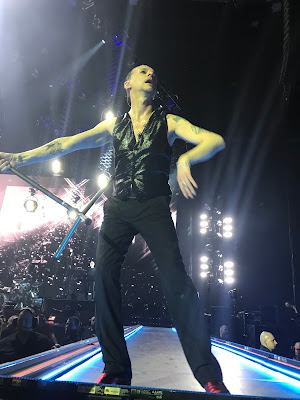 Before I start to write, I would like to say sorry because my English is not perfect, but I will try to do my best. The Budapest concert was very special for me.

If you don't know me, my name is Cecilia and I live in Buenos Aires, Argentina. I had the chance to be in the summer leg and now being part of winter leg too. As you know, Argentina is so far away from Europe. It's like 14 hours in a plane or 13.000 kms. Making every trip represents a big effort in money and time.

This trip was special because my boyfriend had some issues the last week before our trip, so it was only confirmed that we would travel just a day before we were meant to leave.

I decided to go to Nuremberg, Bordeaux, Milano (x2), Prague and Budapest. Only having the confirmation that we were travelling just one day before we had planned to leave meant I had only  half of the tickets I needed. I found some amazing people from DM Ticket Exchange Facebook that made everything possible to receive the tickets in the hotels were were staying in (in some places we only stayed 2 days).

The Budapest concert was amazing - it was the last of my 6 concerts. Two days before I had managed to get one Early Entry ticket, but I needed another for my boyfriend. Thanks God I got one 24 hours just before the concert.

Sorry for my extended beginning but I just wanted to tell you how this trip was a real miracle. 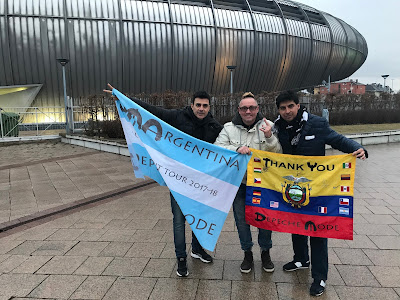 At Budapest, when we arrived at the venue at 4 o'clock, the weather was a mess... rain... freezing rain.  When the doors opened, the people started to push and some people fell down, slipping in the water. Once we made the registration, we waited in the coffee shop.  When the doorss to the arena finally opened,  people pushed and started to run. It was a real mess, people crying, shouting, some guys hurt. A disaster.

I remember something similar in Madrid in 2014, but I think this time it was worse because nobody respected anyone else.

After all this, happily I could get a place in the catwalk, just in the middle. Waiting for Dave's appearance. We listened to EMA, as we have heard them in the last 5 concerts.

The concert started 20.45. During the concert we had some very special moments: 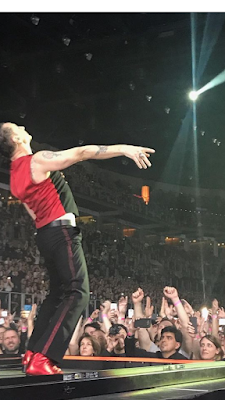 After that moment we sent "flying kisses" between Dave and I and after that I started to shout and cry. All the effort that I made was worthwhile!!!

-Home: my boyfriend was in the top on the catwalk with the Argentinian flag. If you see the videos, when Martin comes to our side, he sees our flag and he make an amazing face!! Some people around my boyfriend told him "he recognized you!!!!".

It was a great moment, if you have the chance to see the videos, just see that moment because Martin's face was unforgettable. 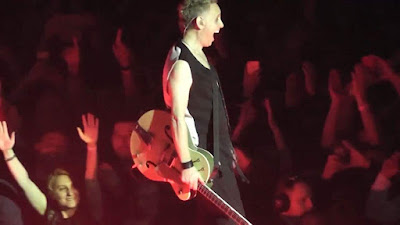 -Everything Counts: having Dave in the top of the catwalk with his mic, was also an amazing moment. Thanks God in the 6 concerts, I was able to be at the catwalk. This time though I was in front of Dave, seeing his skin and muscles perfectly.

As you know, the setlist had no changes, so you know which songs they played. At the end of the concert I felt so sad because I had to return home and my "real life", but I was so happy because
this concert was very very special after all we happened before our trip.

I had the chance to meet more amazing people that helped us a lot, and another ones that recognized us from previous tours with the Argentinian flag.

Thanks for give me the chance to tell you about my experience. I will try my best to travel  to see the band once again, but before all this, I am waiting patiently to see them in one month, here in Buenos Aires, after 9 years.

A big hug for everybody.
Cecilia