It's time for the final review of The Global Spirit Tour Project. When I started this I had no idea what it would involve, how many people want want to write blogs for it and how big it could get. At the time I type this (2pm on 26 July having just got back to Glasgow from Berlin), there have been a total of 625,463 individual views of the reviews and that frankly blows my mind. Thank you very much to every single one of the reviewers who are all absolute heroes, thanks to everyone who has helped promote the articles and thank you to you for reading. Here then is the final review. Part 135 of the Global Spirit Tour Project is a review of the last concert on the Global Spirit Tour at the Waldbuhne in Berlin and it's written by me.

I'm back home after three days in Berlin where I saw both Depeche Mode concerts at the Waldbuhne. It seems appropriate that the band ended the tour there given their links to the city and the size of their German fanbase, so to say I was eagerly anticipating the concerts would be something of an understatement. Kevin May has covered night one already so I'll say nothing more about that gig other than to say Kevin's review is spot on.

Onto last night then. I'd never been to the Waldbuhne before and I was amazed at how stunning a venue it is. The setting is incredible and the sound is perfect. I was travelling with my walking blog adverts Paul, Stuart and John and they were equally amazed at the venue. It is truly a magical place. We wanted to make sure of two things last night  - a good seat but, more importantly, a seat in shade. We're Scottish so the insane heat of Berlin was something very, very new to us. We survived the queue and got ourselves set up for the night to the left hand side of the stage.

Every time that a Depeche Mode tour ends, the inevitable "the band are stopping after this" rumours circulate. I remember someone confidently telling me that the band were splitting up after the Tour Of The Universe for example. Was last night's concert the last time we will see Depeche Mode play live? I don't know and, beyond the band and their inner circle, no-one else knows either. The thought that this was to be their last show, a thought inspired by many more people than normal saying that was the case, was certainly on the minds of the crowd last night however. While there was certainly an air of celebration, that was flavoured with a sense of sadness in case this was it. I know I felt that way. If last night was their last ever show, then they ended on a spectacular high.

From the off the band were on top form. Going Backwards boomed across the Waldbuhne, setting the tone for the evening. While So Much Love had had a welcome return on Monday, It's No Good returned as the second track last night and absolutely thumped out of the speakers. You hear a song like that or like the titanic version of Stripped that came later in the set in this setting and you just know that this venue was made for Depeche Mode. The opening synth line of Stripped last night is possibly one of the greatest musical experiences of my life. It was breathtaking -  hearing that, watching the stage as the sun finally set and dusk fell, every single hair on every body in there standing on end, the entire crowd in a trance.

In other words, I quite enjoyed Stripped last night. 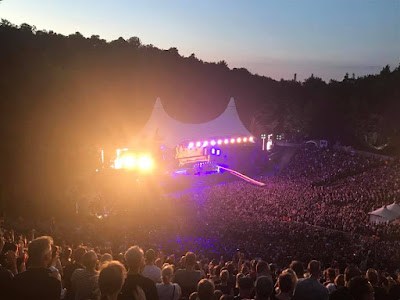 I'm not going to labour the whole "is it over" thing, but there were points last night where the combination of that thought, the emotion of the whole event anyway and the overpriced beer in the bewildering selection of Depeche cups got me a little emotional. During World In My Eyes, the importance of that song and Depeche Mode to me dawned on me. I suddenly thought that this could be the last time I ever saw it played live and it was a really odd moment. I will admit to getting a few tears in my eyes at that point but so what? You want music to inspire emotion in you. You want it to move you. That's what Depeche Mode have always done for me as long as I have been a fan and last night was no different. I imagine 22,000 other people in the crowd felt the same at many points last night.

The setlist was interesting. I don't think anyone saw Poison Heart returning to any concert any time soon, but there it was. It does work in a huge venue with the "woah-oh-oh" part still sounding huge but it slowed things down a bit. Where's The Revolution had that affect too sadly but they are minor quibbles - everything else was spot on and the band played one of the best concerts I have ever seen them play.

Cover Me and Everything Counts were both magnificent. The singalong at the end of Everything Counts seemed like it would never end as everyone of us sung ourselves hoarse. Personal Jesus seemed to have an extra air of menace to it and Enjoy The Silence, my favourite song of all time, was just magical. The return of "Heroes" was nice too given the city we were in, and I though Dave delivered it magnificently. In London last June it transfixed the entire Olympic Stadium and it did that again last night in the Waldbuhne. Dave ended the song by saying "That one's for you Dave" pointing skyward as he did so. A lovely moment.

The version of Never Let Me Down Again last night was one of the loudest and most sinister versions I've heard on this tour. A towering electro-beast played at a volume that could flatten a city. Outrageoulsy good. During that song, I turned into one of those people that live streams gigs on Facebook. I know it's annoying but I felt I had to capture it. Suspend your disgust at the phone fuckwittery, ignore the fact my hand keeps "hilariously" appearing in the shot and enjoy the song for yourself:

Martin made my night by bringing back The Things You Said. I had never seen that song played live and it was just perfect. Again, I seemed to get something in my eye at that point. His other two tracks, Insight and I Want You Now were gorgeous too with I Want You Now having an epic singalong at the end. The absence of Home was a surprise but his three tracks were all wonderful.

The night ended with the most recent surprise addition to the setlist, a surprisingly rousing and actually bloody enjoyable Just Can't Get Enough. There was a slight delay between the end of Personal Jesus and the start of Just Can't Get Enough and you wondered what was going to come next. At these points you always hope for Lie To Me or Rush or insert name of fan favourite, but the choice of Just Can't Get Enough was a good one. As with I Want You Now, it ended with a mass singalong, with both the band and the audience reluctant to stop. All good things must end though and Dave wrapped it up. As he did he shouted "That's all folks!" before the much analysed "We'll see you all some other time" followed. Cue speculation for the masses.

It genuinely was a stunning gig last night and it ended what has been an epic tour on a high. No-one left the venue feeling shortchanged, no-one left feeling flat. Everyone left on a high, buzzing after yet another incredible performance by this incredible band.

Depeche Mode and Waldbuhne are made for each other. See you some other time I hope - I'll keep my 2021 diary clear just in case.

And with that, The Global Spirit Tour Project is over. All 130 gigs have been reveiwed by fans and we've had a few specials too. The effort everyone has put into them has been incredible and I can't believe that people have given up their time to indulge this bizarre plan of mine. I have loved every second of it. To everyone who has been involved, thank you very much and I hope everyone enjoys reading and re-reading the reviews in the future.

What am I going to do with my time now?