IT'S CALLED AN ART - DEPECHE MODE BY ANTON CORBIJN 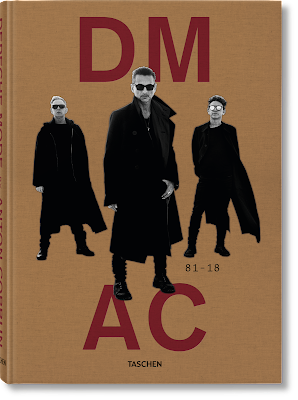 A very fancy, gorgeous looking Depeche Mode book has just been released. Depeche Mode by Anton Corbijn is an illustrated history of Corbijn's work with the band and it is full to the brim with over 500 photographs of the band many of which have never been seen before.
Fans of the band are more than familiar with Anton's work. As you all know, I have droned on for hours about his Violator era work and there is no doubt at all that Anton's iconic work with the band has helped create the aura that still surrounds them today. The music is of course first and foremost, but in the case of, for example, the Music For The Masses singles videos or the glorious Devotional, Anton's work is so bound to the music that it becomes part of it almost. I certainly feel that way about everything from the Violator period; there the artwork complimented the music perfectly, creating a flawless package. 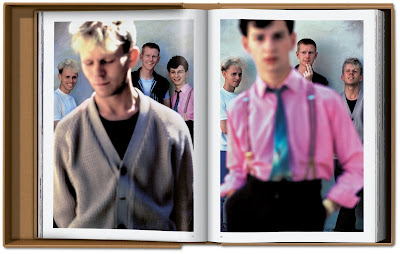 Anton first worked with the band in 1981 of course, the results of which can be seen above. This was for an NME cover feature in August 1981. At that point, Anton though they were too poppy however, by 1986 his attitude had changed somewhat and he directed the video for A Question Of Time. Suddenly, Depeche Mode had an image. 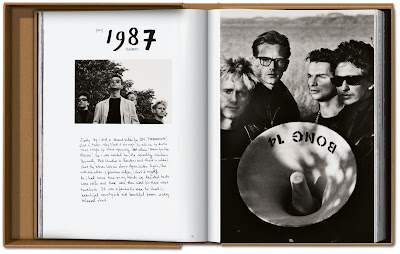 The book is split into different chapters looking at Anton's work with the band in different eras. The photograph above helps illustrate that point as you can see. Much Depeche fan fury (more of which in a bit) was unleashed yesterday when a still from this video showed 4 initials - VC, AF, DG and MG:
"BUT WHAT ABOUT ALAN," people cried, tearing apart their black leather sheets and weeping into their Black Celebration tour T-shirts. "THEY'VE INSULTED HIM AGAIN. HE WAS A MEMBER FOR 12 YEARS OF THE BAND'S 40 YEAR HISTORY. WHY MUST THEY DO THIS?"
As Anton explains in the video, those initials relate to chapter 1, the pre-Alan era. All is well and Alan features plenty in the book as he rightly should.
(I know I'm veering off course with this but does every single Depeche release in whatever form it comes have to generate this debate? Yes Alan was massively influential in the band's most magnificent period and yes it's entirely arguable things might have been different if he stayed but let's not bring him into everything? Let's remember the good times. I'm sure Alan doesn't need this. Also, I'm just having a bit of fun here too. These are dark enough times as it is and this blog is never the most serious of places)
The unreleased photographs are the real gold here and every single one of us Depeche Mode fans wants to see every single one of them. Any unreleased Depeche Mode item, especially in these days of blanket internet coverage and blogs that spam your timelines with flippant articles about b-sides, books and other nonsense (hello), is in exceptionally high demand. Unseen pictures from the time the band were the biggest and best on earth are therefore a bewilderingly enticing prospect.
And that's where there has been something of a problem in the Depeche Mode fan universe in the last couple of days.
The last Depeche book Anton released was the marvellous Strangers, a book positively bursting with magical late 80's to the end of World Violation imagery. You could but that in shops or from the band's World Violation Merchandise leaflet for £13 or so. It costs more now if you buy it second hand but it's well worth it.
This book is a different proposition. As you can see from the video, it's a massive bastard of a book and that's because this release is through Taschen, a company who specialise in publishing art books. This isn't a book you'll find in Waterstones or Saturn, it's one aimed more at the art fan albeit safe in the knowledge that Depeche fans will snap it up.
The price of this book has caused consternation too. There are 1986 copies signed by Anton and the three current members of the band ("BUT ALAN WOULD HAVE MADE THE SIGNATURES BETTER.") They retail at the frankly terrifying price of £750. The first two hundred copies sold for £1,500 each, the first hundred accompanied by a "SOFAD, London 1992" print and the second hundred coming with a "SOTU, New York 2008" print. They've all sold out.
There are therefore 1,486 copies left although you should note that they are going fast. Helen at Taschen has kindly said that I can share her email here (H.Turner@taschen.com) and told me to tell you to email her if you wish to buy a copy of if you have any questions.
Please not that Helen works for Taschen and not Depeche Mode. She doesn't know when the new album is out, she doesn't know Dave's mobile number and, no, she's not heard anything about a former member coming back at any time. I'm sure that Vince wouldn't tell her even if he was thinking about it.
(See what I did there?)

So there you have it. Anton has released a Depeche Mode book full of things we've not seen before but it's very expensive and there are not that many of them at all. If you buy it, good luck to you as you'll have a wonderful item. For the rest of us, I'm sure we're all hoping that this appears in a Strangers like form at some point in the future. It would be wonderful for as many of Depeche Mode's fans as possible to have the chance to see this treasure trove of photos first hand.
Posted by DJM at 17:37