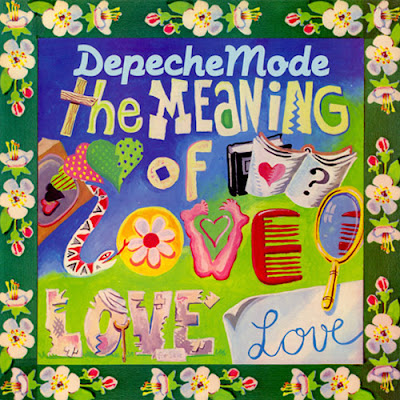 After See You had shown everyone that Depeche Mode were still very much able to carry on with a new songwriter, the band followed Martin's synthpop masterpiece with another poppy love song. Let's be honest, it's not their best single, but it did pretty well considering its fairly synthpop-by-numbers approach, curious lyrics about "wanting a scar" and a video that is quite terrible. Despite all that though, it's still better than everything about Hole To Feed and it has a glorious B-side. Here is the story of The Meaning Of Love. 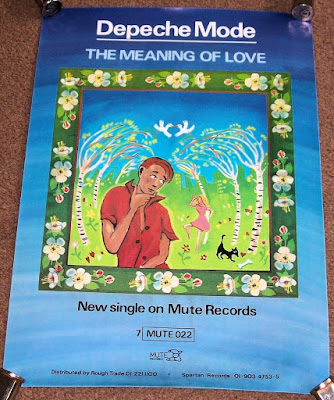 FAIRLY ODD - THE MEANING OF LOVE
The Single
The Meaning Of Love was released on 26th April 1982. 11 years later, Walking In My Shoes would be released on the same day - one single a towering, dark masterpiece with a sound that is the essence of Depeche Mode and the other the second single from Songs Of Faith And Devotion. Ho ho.
The single entered the charts on 8th May at number 34 and this appearance on Top Of The Pops on 6th May helped it rocket up the charts to number 12 the following week. Martin had only just finished his shift on a fishing trawler as you can see from his clothing.
Number 12 on 15th May was as high as the single would get however and it then tumbled from there to 17, back up to 15 curiously, back down to 17 and then 21, 46 and 72 before leaving the Top 75 forever.
It was reasonably well received in the music press. Smash Hits said it was "as damn near perfect as a record could be," which is perhaps a bit much, before adding that the song was "truly scrumptious."  Smash Hits also printed the lyrics and a picture of the still officially three piece band in its 28th April edition 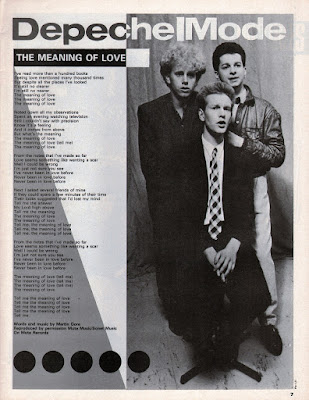 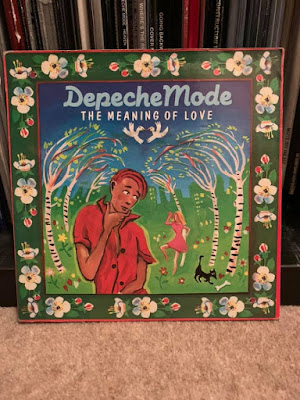 Once again, there were only two formats released in Britain.
Firstly, there's the 7" which remarkably enough features the A-Side and B-Side described above. The sleeve (above) is different to the 12" which is a nice touch I always think and, like See You before it, takes a very literal approach to depicting the song title. 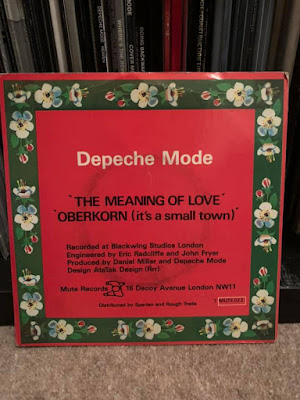 The labels are a nice touch too. Here's the A-Side 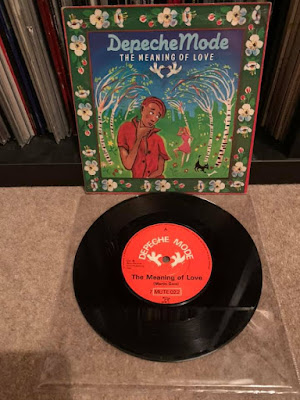 Here is the B-Side 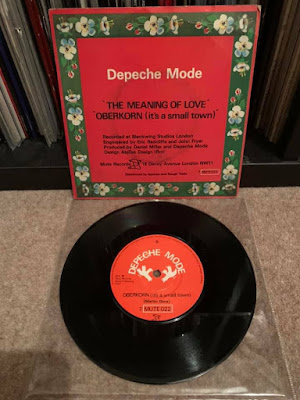 There are 7 different variations of the 7" if you're the sort of troubled soul who needs them all. See depmod.com for details.
The 12" (front cover at the top of the page) features two remixes. On the A-Side, the literal interpretation theme of the video and sleeve is followed with the Fairly Odd Mix of The Meaning Of Love. It's just under 5 minutes long and lives up to its name. Much in the way remixes do now, it adds a few extra beats and ambles along before going all bleepy and odd about 1 minute 30 in. It's the sort of thing that people would proclaim revolutionary if the Aphex Twin released it on its own. The song returns and we get back on track with the middle 8 of the song before the Aphex Twin re-emerges. 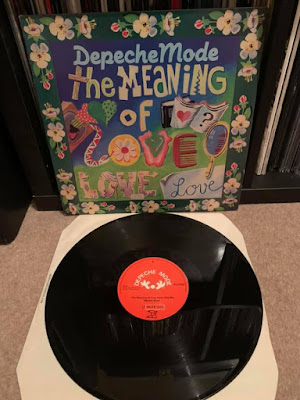 Once again, and this is all getting a bit annoying now, we go back to the middle 8 of the song. All of a sudden, someone (maybe Martin? I imagine a lot of you know the answer) says "What do you want to do then? What can we do" which is something of a surprise. The last of the Aphex Twin returns with Dave trying to sing over him before the song we all know and partially love appears in a seemingly different key to the remix and the whole experience ends. Not fairly odd, very odd. Very odd indeed. 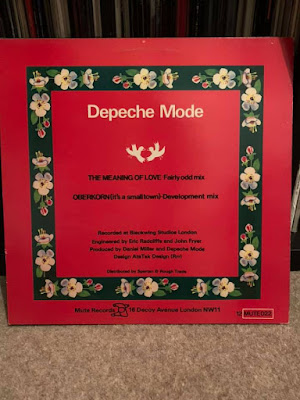 The B-Side is Oberkorn (It's A Small Town) (Development Mix). Not only is it a much better remix name, but it is also a much better track. It's 7 minutes 39 seconds of quite glorious instrumental goodness and is yet another B-Side from that era that you really must familiarise yourself with. 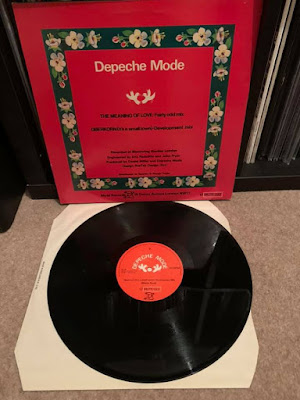 The UK CD Single reissue campaign in 1991 assembled the 4 tracks from the release in the one place: 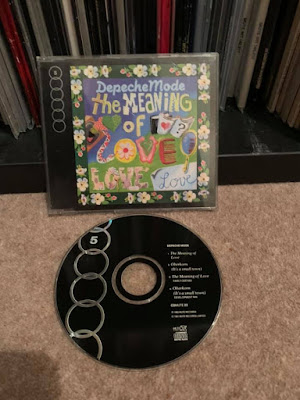 As ever, there are a couple of nice foreign formats to have a look at. The German red vinyl 7" is a lovely thing, both on the A-side 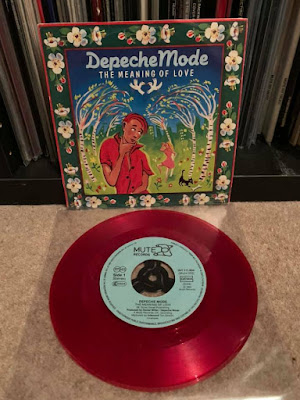 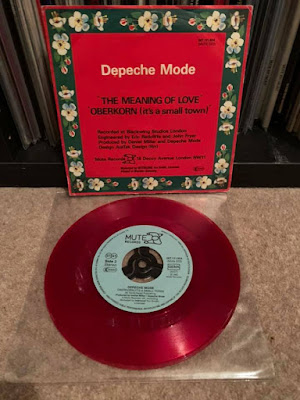 The 12" was released on yellow vinyl too. 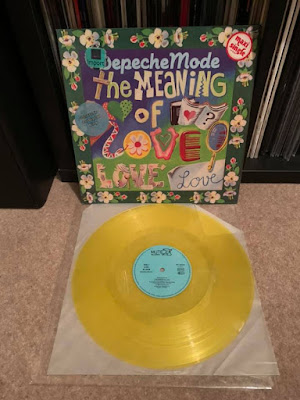 If you want one, the cheapest currently on Discogs is £64. Pricey. 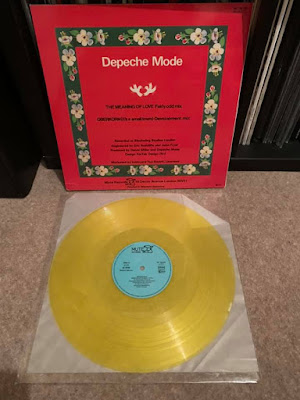 Once again, the Intercord blue stripe CD from Germany is a must have. No-one ever knows why that is the case by the way. I certainly don't yet I collect them. 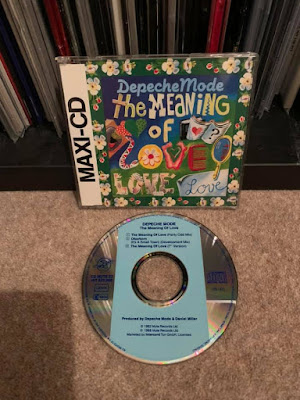 There were also various releases in Belgium, France, Greece, Spain, Portugal, Sweden and Australia.
And with that we leave The Meaning Of Love. Its place in Depeche history is secure, not because of the video (THAT MUST HAVE BEEN BOOK 101 - THIS IS EXTRAORDINARY etc) but because of the single that followed it. Leave In Silence clearly signposted the way Depeche Mode were heading but only after The Meaning Of Love showed us the way out of the first phase of the band's career.

We'll have a look at Martin's first go at making "violence" rhyme with "silence" next time.
Posted by DJM at 17:07