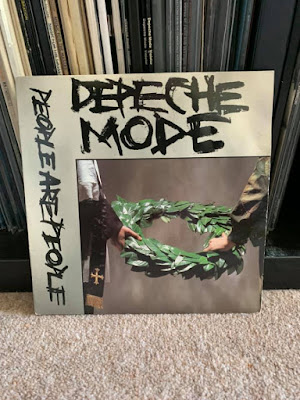 When mixing Construction Time Again there, Berlin made such an impression on Depeche Mode that they decided to record its follow up Some Great Reward in Hansa Studios. The band, Daniel Miller and Gareth Jones headed to Berlin and used Hansa's space to create a booming album that improved upon and crystalised the Industrial meets Pop sound of its predecessor.
The first song the world heard from the album was People Are People, a song that would not only give Depeche Mode their highest UK chart placing but one that woud also conquer Germany and hit a suprisingly high number in the US Billboard chart.
Let's get our heads, and fists, round People Are People. 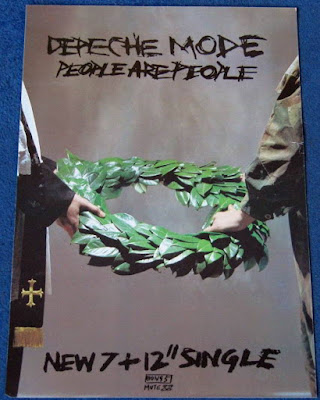 COMMMON DECENCY - PEOPLE ARE PEOPLE
The Single
People Are People (BONG 5) is arguably one of Depeche Mode's biggest ever singles, yet it's a song the band have ignored since the Rosebowl gig in June 1988. They seem to be embarrassed about it, no doubt due to its fairly simple lyrics, but who can't say that when People Are People starts on 101 they don't get a shiver down the spine in anticipation of the song blasting into life? We don't go to a Depeche Mode gig to analyse the lyrics (blogs are for that...), we go to jump around, sing and have fun. People Are People would have been a welcome addition to recent set lists.
The single was released on 12th March 1984 and it was the perfect taster for what lay ahead with Some Great Reward. Almost everything on the single was sampled and played via a Synclavier, including a sample of Martin doing the "ugh-ugh-ugh" noise that you are currently all singing - admit it, you are aren't you? This was the point where Depeche Mode started to leave the pop world behind although as the album demonstrated, they still knew their way around a poppy chorus. They had played with the notion of sampling on Construction Time Again and then Black Celebration saw them develop their glorious. dark, unique sound but Some Great Reward was where they distilled the best parts of both those albums. It was the point phase 1 of Depeche Mode handed over to phase 2.
Initial reviews of People Are People were, as we've all now come to expect, mixed.  Roy Hay from hilarious novelty band Culture Club, a band whose entire career contains not a single second of anything of any merit whatsoever, said in Record Mirror "I really laughed the first time it came on." Only seven months after People Are People, Culture Club released The War Song. Mr Hay clearly has no grasp of irony. Smash Hits were much more positive saying the song was "Easily their best yet and this harder direction is bound to spawn bags of imitators."
The single entered the UK charts at number 29 on 24th March and the above performance on 22nd March marked that event. There are a few things to note from the performance. Unusually, Martin has a top on but it's only a vest and the addition of leather trousers and braces both at least two sizes to big for him help regain some valuable Martin points. He is also alternatively banging bits of metal and an odd drum with a hammer. Alan has started to develop the tall hairdo beloved of peak era Wilderphiles and he is hitting a bit of corrugated iron that, for some reason, says PUS on it. He at least has a synthesizer though. Dave and Andy clearly couldn't be trusted with bits of metal or iron though - they just have a drumstick and cymbal each.
The UK pop pickers clearly loved this performance and the following week, People Are People zoomed into the Top 10, landing at 9. It went up again the following week to number 5 - the band's highest ever UK chart position. But wait! The next week, it went up again, this time to number 4. Depeche Mode had once again taken to the Top Ten but sadly number 4 was as good as it got. Industrial action at the BBC meant that the band could not play the song on Top Of The Pops again and so sadly, the song's momentum stalled. Instead of climbing higher, possibly even to Number 1, the next week it went down to 6. The following week, it fell 9 before one more week in the Top 20 at number 20, finally leaving the charts punching and kicking and shouting via numbers 36, 50 and 74.
This hugely impressive performance was bettered in Germany where the song was Number 1 for three weeks and, for the first time, America fell for Depeche Mode's charms with the song reaching a remarkable number 13. They had a genuine worldwide hit on their hands.
As I mentioned earlier, the song has been ignored by the band in live sets for 30 years now. It has featured 226 times however and it would be great to hear it again.
As with Love In Itself, the B-Side to People Are People was another Alan Wilder composition In Your Memory. Originally announced by the Depeche Mode Information Service in its March 1983 newsletter as Place It In Your Memory, the song is, like Fools, another great Alan penned track. It's a catchy, clanging track full of the bleeps and bashes of this era's Depeche Mode but it's one that's never seen the light of day live
The Video
The video is not bad while never quite managing to be that good. The live action scenes of the band hitting things, sliding down other things, turning handles, pulling levers and pushing stuff are mixed with actual singing scenes, all of which were filmed on HMS Belfast which is a ship that you can visit if anyone is ever allowed to travel to London again,
Luckily, the boat isn't in active service anymore. If it was, then Dave dancing rather than steering the thing 57 seconds in could have led to something awful happening. Amidst the Depeche Mode Attempt To Steal A Royal Navy Boat And Do It Badly scenes, there is lots of stock footage of soldiers, weapons, war and so on because, let's be honest, can any of us really understand what makes a man hate another man? It's deep stuff. Dave's Everything Counts trick of dancing while being interposed over the video makes a return for the second verse and Martin likes it so much that he joins in for his solo lines.
And that's how it carries on really. More boat, more bewildering stock footage and more shots of Martin and Dave singing. Not much happens really. 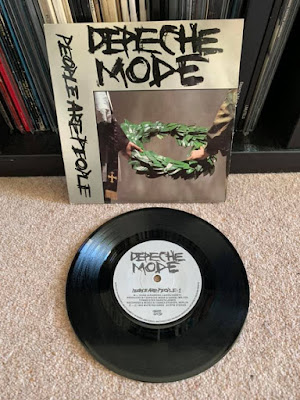 The Formats
7BONG5 features the A-Side and B-Side we've covered above. A fun fact however is that the cover (above) features a famous hand. One of the two hands above belongs to English actor Hugh Grant in what is surely one of his most convincing performances. As far as I know, and if I am wrong I have no doubt you'll tell me, this is the only Hollywood star to feature on the front of a Depeche Mode records. 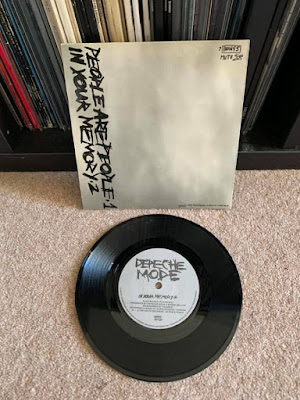 The rear of the single contains information but no A-list celebrities. In needless interest in things news, I again love the font and the labels. Very, very nice. 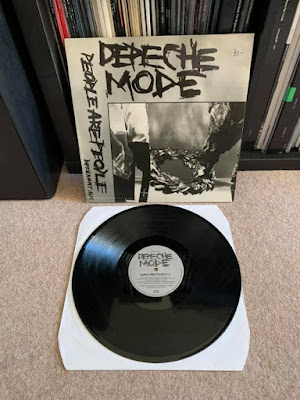 The 12" single, 12BONG5, is a wonderful thing for many reasons but one key one - the track on the A-A-side, People Are People (Different Mix). The literal title aside, this is a stunning remix. The first minute or so sounds like the noise you would get if you turned on a switch that activated a factory and from there it thuds majestically, all 7 plus minutes a joyous reinterpretation of the song. It is fantastic. God, I really wish Depeche Mode still did their own remixes. 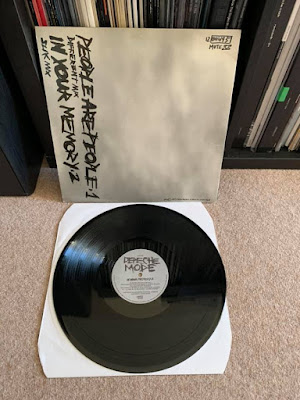 The B-Side features the Slik Mix of In Your Memory, so called because Alan's nickname at the time was Slik in honour of his increasingly tall and slicked back hairdo. I don't know whether this really cool remix is also called that because the band left Alan to it in the studio. Depeche Mode leaving Alan alone in a studio to do all the work? Well, if it happened then, it would certainly never happen again.... 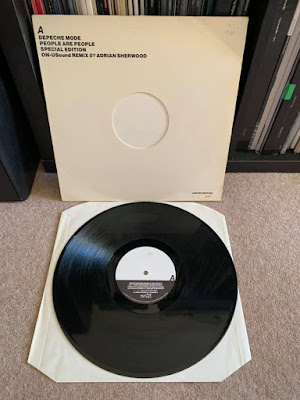 The March 1984 Depeche Mode Information Service newsletter said "There will NOT be a limited edition 12" " of People Are People but quickly contradicted itself the following month, announcing that there would be a limited edition 12" featuring "A Special Club Mix by Adrian Sherwood," adding, somewhat mysteriously, that it was "recorded purely for clubs." If you try to listen to it in your home, your speakers explode and the police arrest you. L12BONG5 is a numbered release in a glossy sleeve and it's a lovely thing from its cover all the way to its labels. The A-Side, the ON-Usound Remix is great and clangs along pleasingly in the same way the Different Mix does. 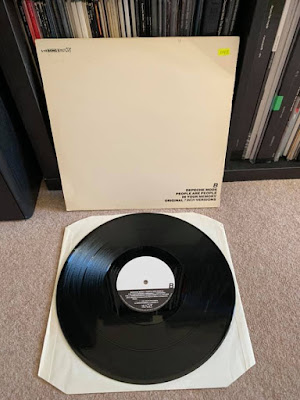 The B-Side features the single versions of People Are People and In Your Memory. 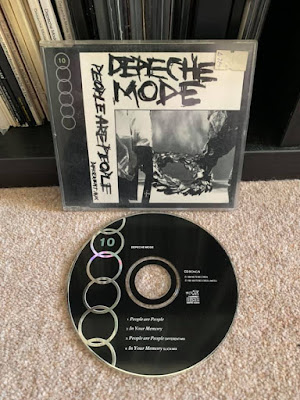 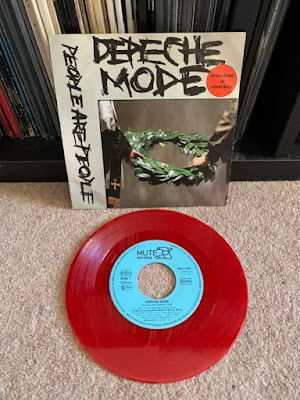 Once again, Intercord broke out the coloured vinyl box and once again the 7" was released with its erstauflage in rotem vinyl which I am assured means "first edition in red vinyl." 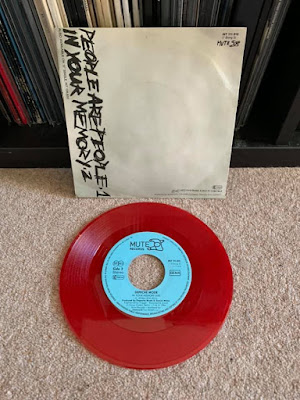 The single features the same two tracks as the UK 7". 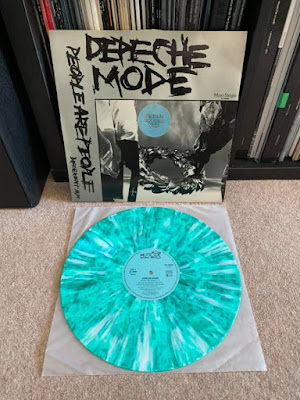 The coloured vinyl 12" is a STUNNER. Look at that - magical, marbled vinyl. 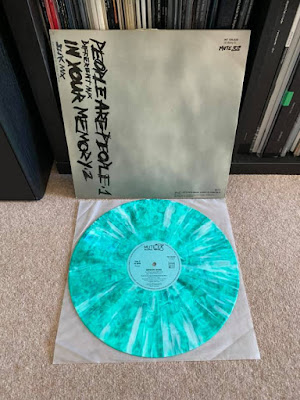 The B-side above is equally gorgeous. The record features the same tracks as boring black vinyl 12BONG5. 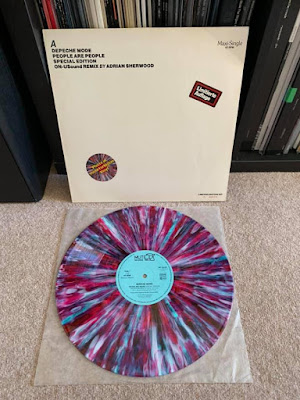 Hang on. The German L12 equivalent is MORE STUNNING! Look at that beauty! Quite superb and limited edition too. You can't quite see in that picture, but in the bottom right it sais "Limited Edition No." and a number. Mine? It's number 46,975. Highly limited stuff. 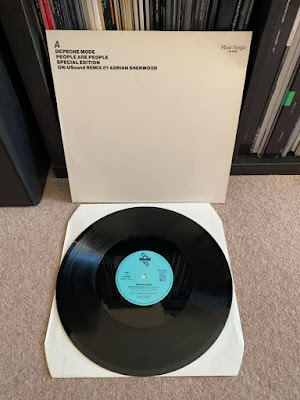 I discovered that I had one of the three variations of the German black vinyl L12 when I was digging out records for these photographs. There it is above. 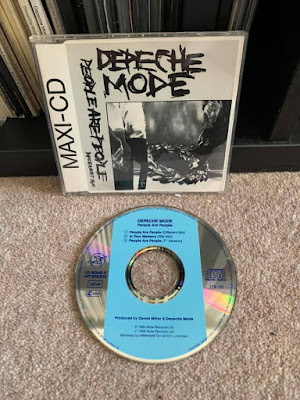 The German blue stripe CD single is a three track affair, featuring the two standard 12" tracks and the single version of People Are People. 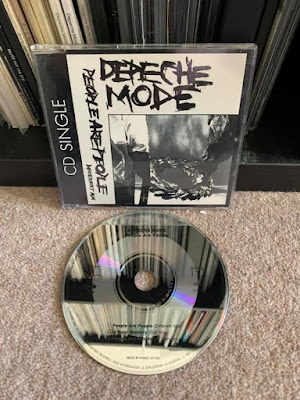 The French CD single features the same tracks. France and Spain also released versions of the L12, the French one saying "Limited Edition" on the front and the Spanish one "Edicion Limitada" which is pleasing if you like that sort of thing. I seem ot have created a rule for these posts where I only post pictures of things I have, so to see that sleeve, head to depmod.com 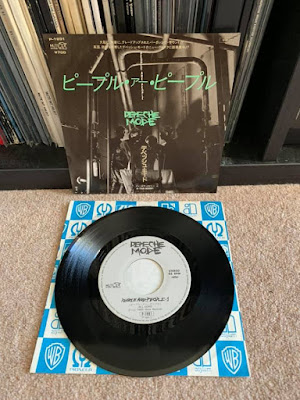 Away from Europe, there was a Japanese 7" which is nice thing. It uses the picture that would form the cover of the North American album People Are People. For those who don't know, and to be honest why would normal people know this, the sleeve is a shiny piece of paper and the record is housed in the blue inner sleeve above. The shiny paper sits on top of that. 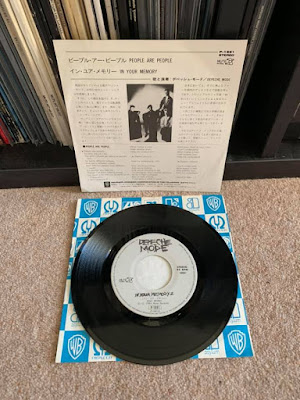 People Are People's lyrics feature on the reverse of the shiny paper thing. 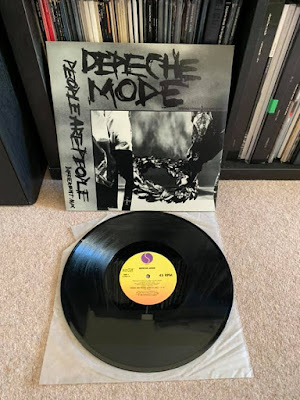 Finally, the US 12" features three tracks, namely the Different Mix, the On-Usound Remix and a track called In Your Memory (Slik Mix Edit) on the sleeve. It is in fact the single mix of In Your Memory, but I guess that is actually an edit of the Slik Mix so fair's fair. 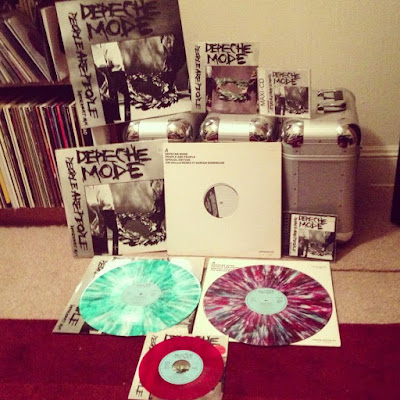 People Are People was Depeche Mode's first big global breakthrough single and it really is a fine track. It started off a new level of fame for the band, one that would grow and grow over the next few years. Suddenly, Depeche Mode weren't just a synth band from the UK. They were a band with a German number 1 and a Billboard Top 20 smash hit.
They seemed unstoppable. All they had to do now was avoid controversy and not release a song about bondage sex or one criticising God and a UK number one would surely be theirs.
They wouldn't do that would they?
Posted by DJM at 20:03