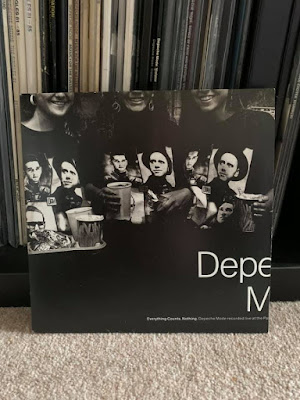 On 13th February, Depeche Mode released their first ever live single. Everything Counts was chosen as the best track to promote the forthcoming live release and that was a very good decision indeed.
This release saw Depeche Mode release not one but two new formats and easily their most bizarre official release ever. Until Hole To Feed that is.
Let's then grab all we can of Everything Counts (Live).
FUN PACKED - EVERYTHING COUNTS (LIVE)
The Single

In BONG4, the Depeche Mode fanclub magazine, the new single and album were announced. It was confirmed that Everything Counts would be released as a live version in "mid January" on 7", 7" collectors pack, 12", remix 12", a 10" 2 track single, 3" filofax CD and 3" remix filofax CD. We'll arrive at Format Corner soon enough so let's leave an analysis of that for now other than to pause and wonder what was envisaged with the 7" Collectors Pack? We'll never know.
The single, BONG16,  was in fact released on 13th February 1989. Smash Hits liked it: 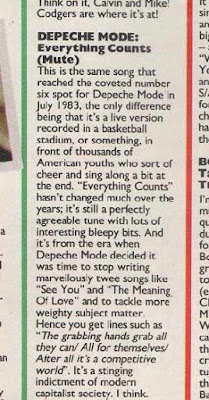 A "perfectly agreeable tune" indeed. I presume other music magazines reviewed the single but I can find no trace of those. Smash Hits helpfully provided the lyrcis too: 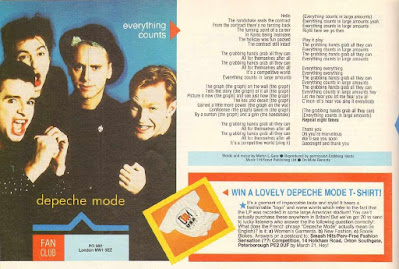 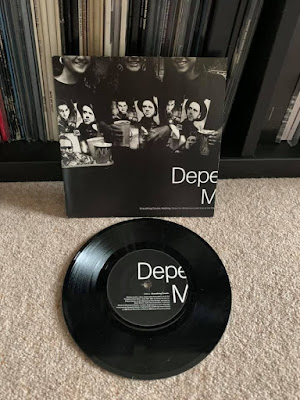 I will say this now and try not to repeat it several times in this section - the artwork on these formats and the labels are all wonderful. Take that as read from now on. BONG16 features the two live tracks I mentioned earlier. The A-Side and front artwork is above. The three girls on the front attempted to sue Depeche Mode because their image was used without their permission. I don't think they succeeded. 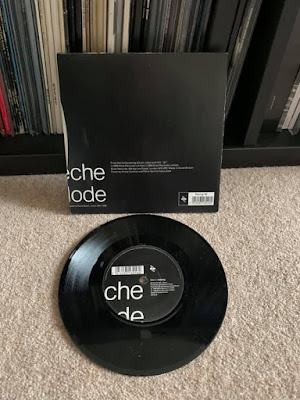 There's the back and the B-side. I don't know if the colour black's legal team got in touch with the band about the use of its image on the back there. On the topic of 7" singles, there is a UK 7" promo, BONG16R. It looks just the same as the 7" but has the Radio Edit of Everything Counts (Live) on the A-side and the full version on the B-side. Unless a copy has a Ferret & Spanner or similar sticker on it, the only way to tell that you have the promo is by looking at the labels in the record. I don't have this promo and if you're one of the people who I contact on EBay asking for a photo of the labels of the record you are trying to sell, I'm sorry for being an oddball. 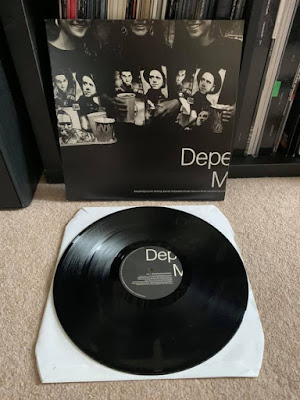 The cover of 12BONG16 features the same three litigation hungry girls. There are two tracks on each side of the record, with the Single Version of Everything Counts (the version from the video) keeping Nothing company on Side A. 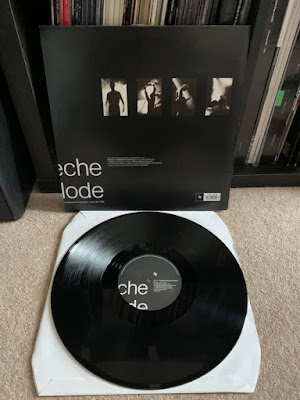 The rear sleeve is a work of genius. Those four Anton taken photos are outstanding and quite beautiful. Sacred and A Question Of Lust, both from the Rose Bowl of course, feature here. Those two tracks and Nothing were left off the original vinyl release of 101. 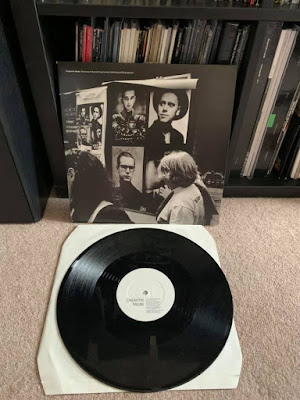 L12BONG16 gave us three new remixes. On the A-Side there is the rather nice Tim Simenon/Mark Saunders remix of Everything Counts which is also known as the Bomb The Bass Mix. 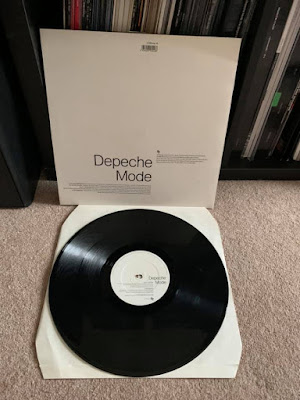 On the B-Side, we get the Justin Strauss remix of Nothing which also goes by the name of the Zip Hop Mix. A dreadful alternative name and an equally dreadful remix. The Tim Simenon and Mark Saunders remix of Strangelove (a.k.a the Highjack Mix) is much better. 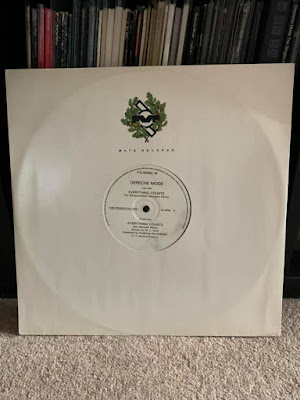 There were two promo 12" singles. P12BONG16 features the Tim Simenon and Mark Saunders Remix of Everythinhg Counts and the Alan Moulder remix of the same track which featured on a format we've not yet come to. PP12BONG16 (promo promo?) features the Tim Simenon and Mark Saunders remix of Strangelove which is called the Hijack Mix on the label and the Remix Edit (a.k.a US 7" Remix) of Nothing. 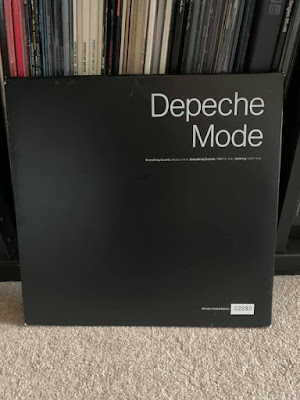 Here's a first. The single was released on a neew format for Depeche Mode - a 10" single. 10BONG16 is a limited edition numbered affair which comes in a lovely all black sleeve. 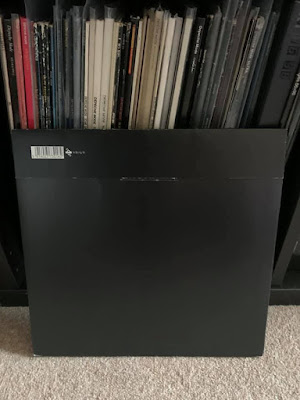 It's a precariously put together envelope package. You need to be very careful when opening the back of it as the bit of cardboard that hooks into the sleeve is a bit thin. 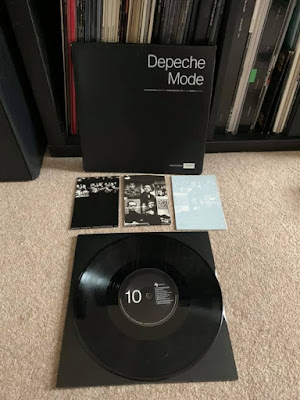 There are gifts inside too - two postcards and a window sticker. It is still possible to find a complete set if you are looking for one. Do check that everything is present however. There is of course a record too. On the A-Side there is a new remix called the Absolut Remix and it is a cracker. 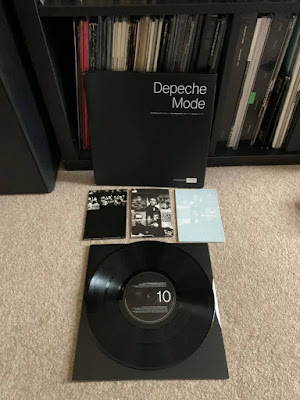 The B-Side sort of contains three tracks. Fiestly, the classic In Larger Amounts remix of Everything Counts and thirdly, the Reprise version of the track which is that lovely final track on Construction Time Again. Sandwiched in between the two is the grim U.S. 7" Mix  of Nothing which is an insult to the track it attempts to remix. I'm listening to it as I type this. Good grief. 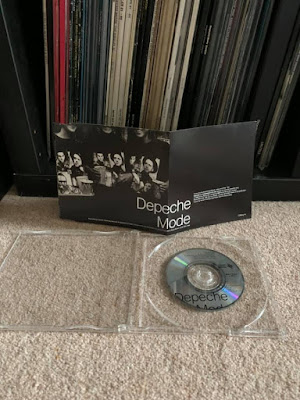 We had seen 3" CD singles for American and German releases before but this was the first time the format had been used in the UK. CDBONG16 should come with a black 5" adapter (mine doesn't) and it contains the same four tracks as 12BONG16. 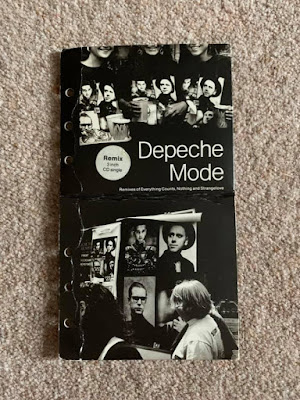 LCDBONG16 comes in the oddest format Depeche Mode have released anything in, including the entirely pointless cube the entirely pointless MODE came in. In what will come as a surprise to nobody, I've written a full blog about this format already so head to this link - A Filofax? - and read a longer version of this paragraph there. 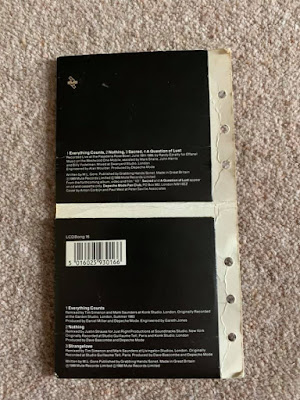 People who used filofaxes were busy and important so they needed to be able to carry both 3" CD formats of a single in one place rather than drag another thing jewel box around with them.
"Nigel - why are you late for this important meeting of people who make obscene amounts of money thanks to Margaret Thatcher's government deregulating everything to the benefit of only a tiny proportion of the country?"
"Well Rupert, I would have been on time but I couldn't fit CDBONG16 into my briefcase"
"For God's sake Nigel, buy LCDBONG16. That was you can put it in your filofax along with the name of your cocaine dealer and the man who sells you red braces. It allows you to carry BOTH formats at the one time. Honestly Nigel, you are a shambles."
Or something like that anyway. As mad as this format is, it is rather nice, though the slots to fit the CD singles into are essentially the same size as the CD itself so getting LCDBONG16 out is tricky. 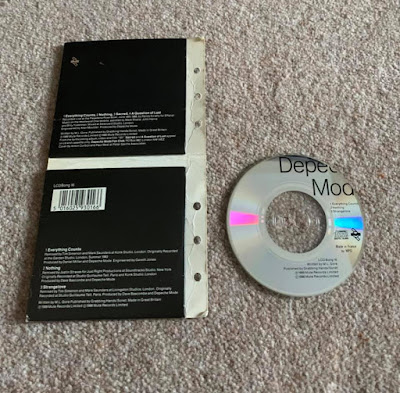 It can be done though. It features the same three tracks as L12BONG16. 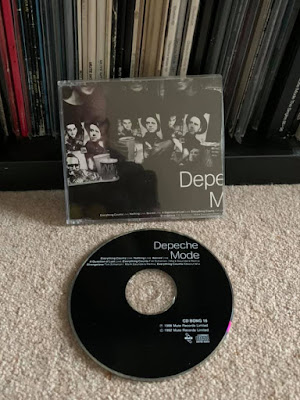 This single got a 1992 reissue too and it features the seven tracks from both the 12/L12 and CD/LCD releases. Don't try and stick it in your filofax however. 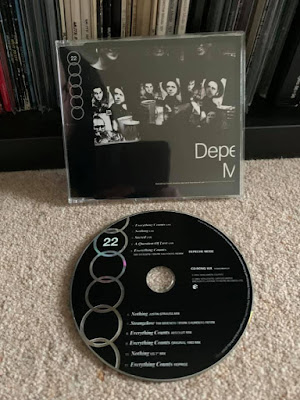 The 2004 boxset reissue takes those seven tracks and adds the tracks from 10BONG16. 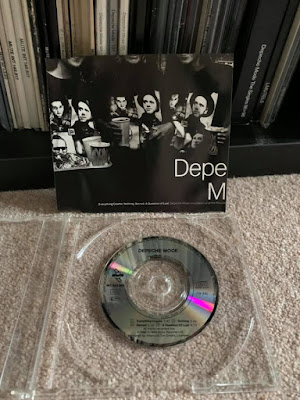 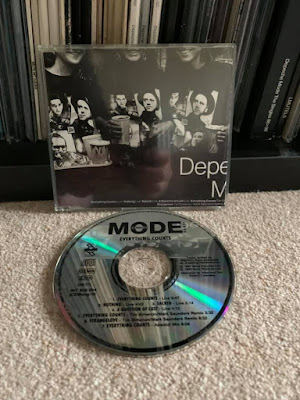 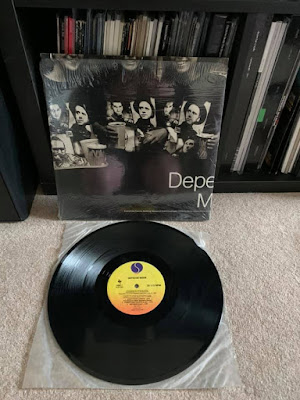 The US 12" is a 6 track affair, taking the 4 live tracks from 12BONG16 and adding the Tim Simenon and Mark Saunders and Absolut remixes of Everything Counts. 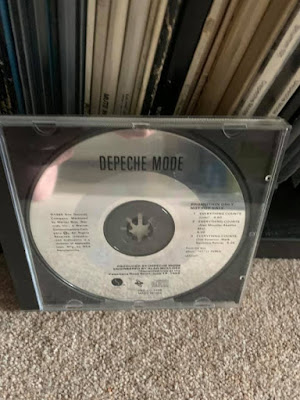 Finally, the US promo CD contains the Radio Edit of Everything Counts and the same two additional remixes featured on the US 12". I took the photo like that because if I did it in the normal way you could see me in it and no-one wants that. 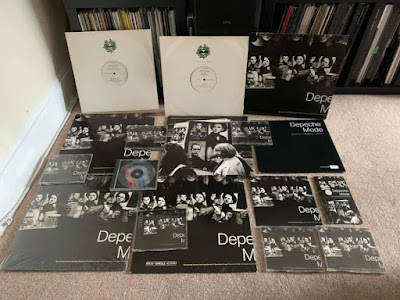 101 would soon follow and many late in the day newcomers like me would suddenly discover just how good Depeche Mode were.
Come the end of the Music For The Massses tour then, the band had reached new heights. What would come next? Could they follow that?

Of course they could. If you think my posts in this series so far have been of the drooling fan boy variety, next time we start on the Violator singles.
Posted by DJM at 14:56