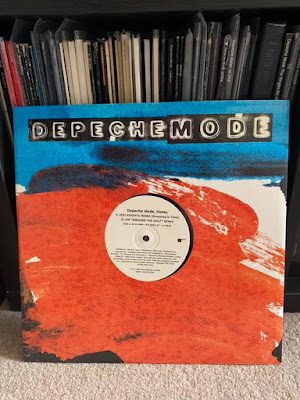 The third single from Ultra and the third Depeche Mode single to feature Martin on vocals, Home was released on 16 June 1997. The song is one that a number of non Depeche fans picked up on and it's one that has become a live favourite. The single release was a fairly low key one with a couple of live tracks, a couple of decent remixes, more odd CD single boxes and, for the first time in a very long time, a video that Anton Corbijn had nothing to do with. Let's have a look at this song from the wrong side of town.
FROM MY FIRST BREATH - HOME
The Single 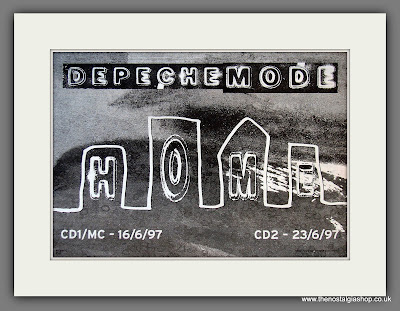 Home, BONG27 appeared on 16 June 1997. There were no television appearances to bolster the song's chart performance this time, so all we had to make so with was the video which we will come to later. The single was generally well received though not everywhere. On 18th June, Melody Maker said:
"MORE maisonette than mansion-sized, this is tidy, moody and not at all offensively pompous. With a bitta jungley feely, naturally. Of course, Dave's deadpan, half passionate vocals are still choking back a sob like they've nearly , but not quite, forgotten what there is to be upset about, but it also sounds like they've made him stand out in the garden while he does it. So, you know what kind of home we're talking about. Your auntie's.
There's a mix called "The Noodle And The Damage Done." Dave Gahan was in rehab, you know."
At least get the name of the singer right. Oh and look - a drug reference. Typically tedious stuff from Melody Maker really but, if you really look among all the smartarsery, they seem to like it.  The NME said:
"Martin Gore sings this one (wonder what Dave was doing at the time?) and makes a personable job of it. The menace of self-annihilation is suggested in the words and heartless beats, but then an enormo string arrangement arrives like the Seventh Cavalry and we're all redeemed once more."
In Billboard. Larry Flick wrote:
"The latest single from Ultra shows the venerable electronic group in a predictably melancholy mood. But who cares? Few acts can dish out the angst better, and "Home" pleases with its baroque strings and skittling beat. Modern rock radio is a given. The question hanging in the balance is whether popsters will once again welcome Depeche Mode onto top 40 airwaves. Hard to say, though this is certainly the act's best mainstream single in a good long time."
I once received a review of it directly during a game of golf. I took my clubs to a public course in the East End of Glasgow one afternoon in 1998 and strated hacking my way around uselessly. A man asked if I wanted to team up and given how scary he looked, I agreed. We chatted about music and I mentioned I was a Depeche fan. As we approached the next tee which was high up on the course, he said that he loved Home, adding "It got me through a really tough time last year as I was living down there." Using his club, he pointed to Barlinnie, Glasgow's notorious prison. What little was left of my golfing ability quickly evaporated and he won easily. Depeche Mode really do get everywhere.
The single really didn't perform well in the UK charts. It entered at number 23 and then fell to 26, 47 and 67. It briefly reappeared in September 1997 popping up at 93 and then 100 but that was that. A disappointing return for this lovely song.
Home has long been a live favourite and it has turned up in many different guises over the years from a piano ballad to a remixed version and more. It has been played live 541 times, featuring on every tour the band have played since its release.
The Video
The lack of income from not touring Ultra added to the hole in the band accounts caused by drinking all the booze on earth between 1993 and 1994 meant times were hard for Depeche Mode. They went to Los Angeles for the Ultra party but were so strapped for cash that they had to share one hotel room as this video shows. They couldn't afford Anton, so Steve Green did all the video work.
We open on a spooky bald chap who seems to have intercepted the band's itinerary as he heads to their hotel and peers through the window. As he does, we see Dave and Martin sitting on their bed and Fletch in a chair no doubt relieved that, that despite the inevitable cramp he'll get sleeping there, he won't have to sleep beside Dave, a notorious snorer.
Martin starts singing and that seems to annoy the bald man, as he's soon off nosing around other hotel rooms like a big pervert. Dave takes a moment to enjoy some non-singing time and gets to work on the lyrics for Hole To Feed, a song directly inspired by this roomshare business. As Fletch stands moodily beside a door, the bald man reappears, this time walking straight through the door because he is a ghost. Or something.
I'd actually forgotten how bad this video is. The ghost perv keeps wandering around and we see arguing couples, a waltzing couple, a man having a heart attack and much more equally uninteresting things, all playing out as this glorious song plays along. The video is a waste of a good song. OK, Anton might have come up with some random nonsense involving grainy footage of an old man in an actual home as women dressed as builders walk by, but it would have been more interesting than this.
Even the band look bored by it, but that might be down to the roomshare thing. It rumbles on until it ends and that's that really.
The Formats 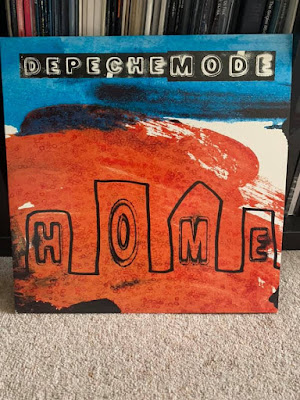 The single appeared on four formats in the UK and there were a couple of promos too. We'll start there. 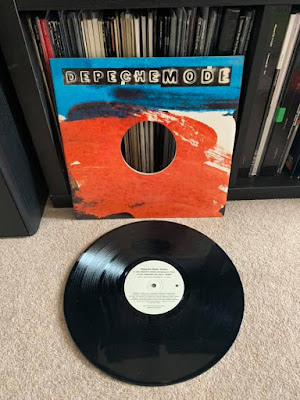 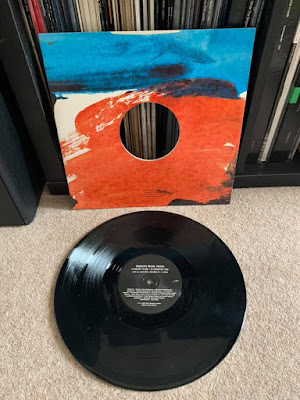 The label on the A-side is white and, as keen-eyed readers will have already noticed, black on the B-side. This is the detail you come here for. 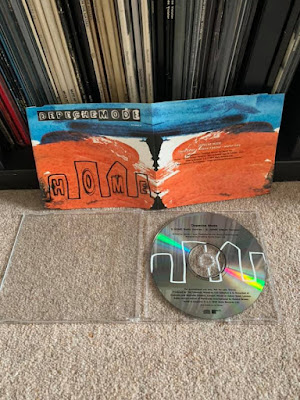 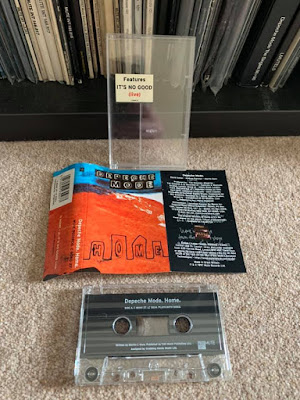 We had no 7" again but fans of the old fashioned A and B side were given a treat with CBONG27. It features the album version of Home and, as the sticker on the front suggests, a live version of It's No Good. It was (mostly) recorded live at the Ultra party in London on 10th April 1997. 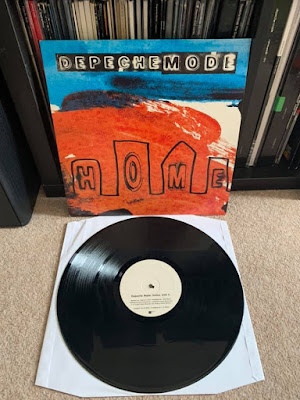 Because it was the late 1990's and everyone thought vinyl was for oddballs, the 12" didn't appear in the adverts for the single. 12BONG27 exists however. On the A-Side (above), we have the Jedi Knights Remix (Drowning In Time), a remix that is very much a product of its time and thus awful, and the better Air "Around The Golf" Remix. 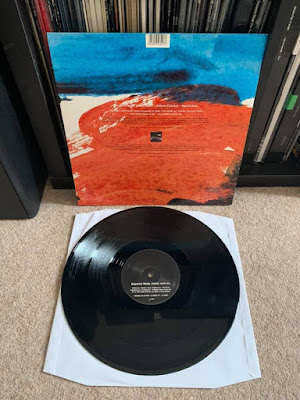 The B-Side (note - black label like the promo 12") foists two more unwelcome Home remixes on us. LFO Meant To Be was presumably meant to be something else. The Grantby Mix is a very late 90's trip hop type remix which naturally does nothing to improve the original song. The guitar solo it bungs on it the end will test even the most devoted fan's patience. 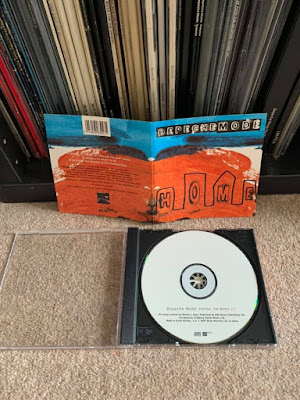 CDBONG27 comes in an Ultra era reversible nonsense box naturally. It contains the Single Version of Home together with the Air "Around The Golf" Remix and LFO Meant To Be from 12" and adds The Noodles & The Damage Done, a frankly laughable remix. Jesus it is bad. I realise I haven't mentioned the artwork yet. That is deliberate as it is dreadful. 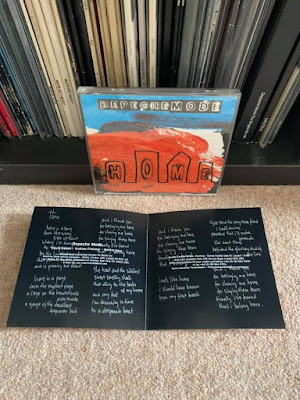 The CD sleeve features the lyrics to Home. 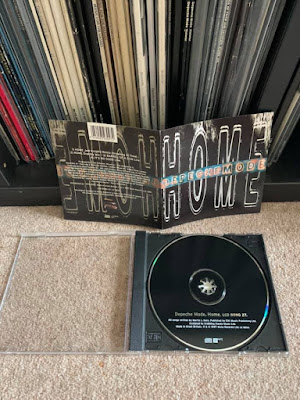 LCDBONG27 (reversible box of course) is a bit more interesting. It has four tracks - the Grantby Mix and Jedi Knights Mix (Drowning In Time) and live versions of Barrel Of A Gun and It's No Good from the London Ultra party. 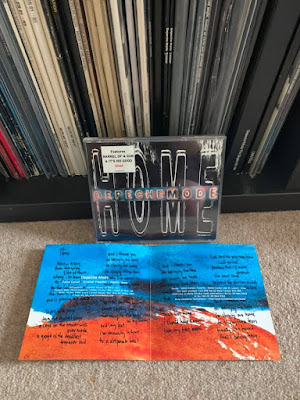 Both are nice to have of course, and the sticker on the front/back is proud to advertise them. They were given a bit of a touch up in the studio to make them ready for release however. 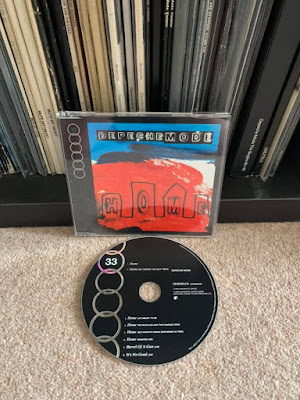 The 2004 CD single features the 8 tracks from both CDBONG27 and LCDBONG27. 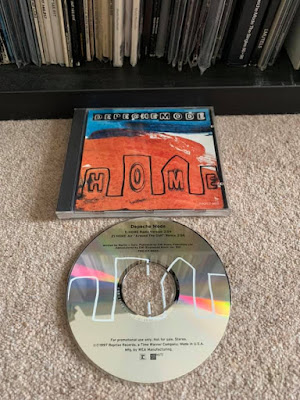 The single wasn't released in the US on its own as it appeared later as an odd joint thing with Useless which I'll cover next time, There is a Home promo CD however, and it features the Radio Version of the song and the Air "Around The Golf" Remix.
Elsewhere, only the reliable Germans released the single on a 12". They had two CD singles too as did France, Hong Kong, Italy, Australia and Scandinavia. Benelux had those plus a 2 track cardboard sleeve CD that features the two songs on CBONG27. Brazil, Mexico and Taiwan released on CD only, as did Japan, 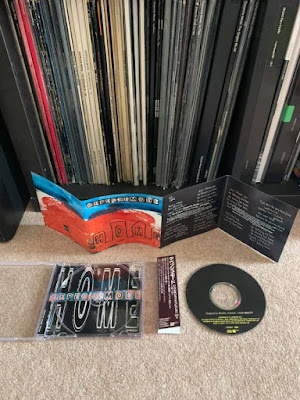 The ever inventive Japanese label managed to combine both the UK sleeves in one as you can see. 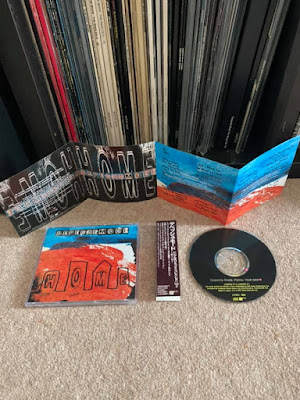 The single is an 8 track affair, featuring all 8 songs from the UK CD singles. 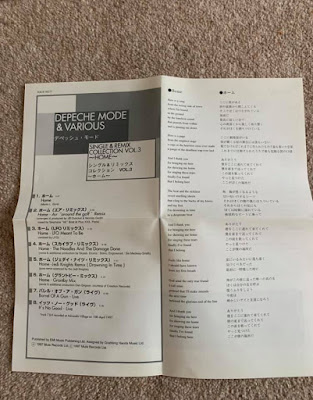 As well as the usual OBI strip, there's a folded leaflet inside too. As you will see, this CD is "Single and Remix Collection Volume 3" with the CD singles for Barrel Of A Gun and It's No Good having been volumes 1 and 2. 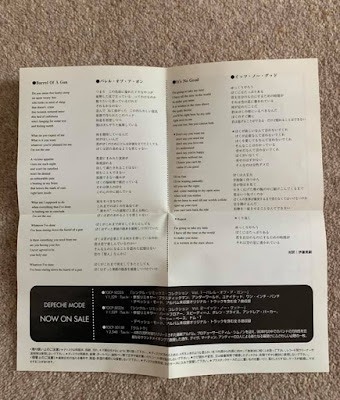 The lyrics to all those three songs are printed on the reverse. 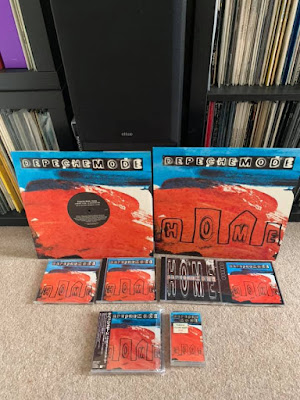 Home is an odd single all told. A wonderful song surrounded by mainly terrible remixes, a very poor video and artwork Anton must have prepared realising he only had five minutes left until the artwork deadline. It's a bit of a chance missed really, especially after the Top Ten success of the previous two Ultra singles.
Anton would be back next time however and that provide a memorable video to accompany a nice remix of Useless. That's what we'll look at next time.
Posted by DJM at 19:38