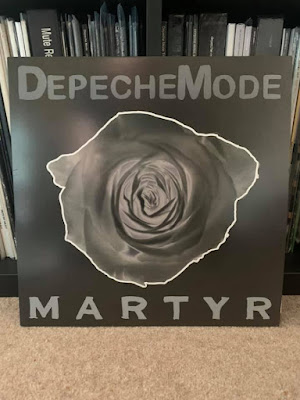 We didn't have to wait long for new Depeche Mode material post Touring The Angel.  To accompany the new compilation The Best Of Volume 1, a new single was announced. Martyr, a track recorded during the Playing The Angel sessions was that song and it's a decent enough track.
The Best Of Volume 1 really is an odd one isn't it? That's a discussion for another time (see future blog Depeche Mode - That Is An Odd One Isn't It) but I still can't help but wonder why it exists other than to satisfy a contractual obligation.
Anyway, enough of that. Here's Martyr.
I KNEW WHAT I WAS LETTING MYSELF IN FOR - MARTYR
The Single 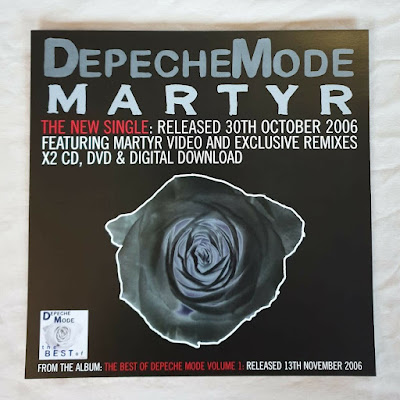 Martyr, BONG39, was released on 30th October 2006.  Funnily enough, I'm writing this on 30th October 2021 so happy 15th birthday Martyr.
Reviews of this single have proved hard to find and it seems the song was overlooked by most reviewers when they were writing about The Best Of Volume 1. It's a shame really as it's a decent song and it continues the Playing The Angel vibe nicely. It perhaps wouldn't have fitted on that album given its slightly poppier feel mind you. One thing you could do when Martyr was released was download the stems for the song to remix it yourself. My attempts at that were of course disastrous, extending only to repeating the bass line and adding a drum loop or two, but the stems did reveal that the song was filled with interesting parts and noises. The bass line itself is a wonderful thing for example.
The band did no promotion for the single whatsoever which by now should be no surprise to any of us, That didn't stop the single reaching an impressive number 13 in the UK however. ok, it entered at 13, immediately fell to 41 then went to 65 and finally 100 but still, a Top 20 hit nonetheless.
By the time the band returned to live duties Sounds Of The Universe had been released so we were thrilled with the likes of Peace, Hole To Feed and so on, meaning that Martyr didn't get a live run-out. It's still never been played live and it's unlikely that it ever will be. Poor Martyr.
The Video
This is an odd one. The lack of interest shown by the band in promoting the single is mirrored by the "will this do?" feel of the video. In what I presume is a nod to The Best Of Volume 1, the video takes excerpts from other Depeche Mode videos, puts them together and gives us an almost entirely forgettable four minutes or so. The songs that it uses are:
Barrel Of A Gun
Stripped
Enjoy The Silence
Precious
It's No Good
Strangelove
Suffer Well
Personal Jesus
Walking In My Shoes
A Question Of Time
But Not Tonight
See You
Pimpf
Shake The Disease
Just Can't Get Enough
It's Called A Heart
Love In Itself
Never Let Me Down Again
Dream On
Behind The Wheel
Blasphemous Rumours
People Are People
Master And Servant
Strangelove 88
Everything Counts
It also features footage of the band in photoshoots, what looks like some footage of Dave driving the car he drives in World In My Eyes and some snippets of 101, Devotional and Touring The Angel.
That's all there is to say about the video really.
The Formats
The formats are where Martyr gets interesting as we got a splendid limited edition 12". To promos first however: 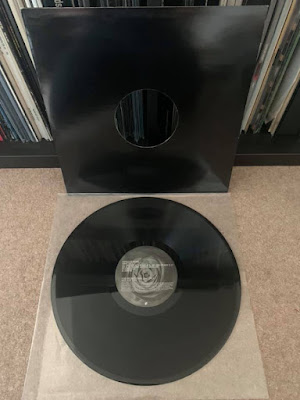 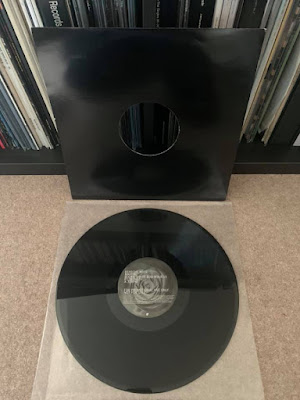 It contains the same three tracks as 12BONG39 so we'll come to those shortly. 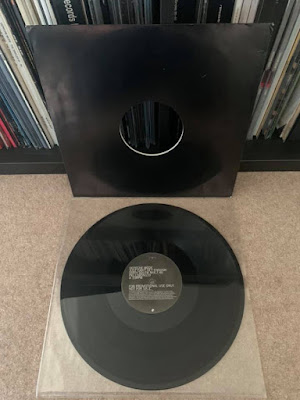 Next up we have PXL12BONG39. "Hang on David," you are all screaming, "where on EARTH is PL12BONG39? Are you mocking us David? WHAT ARE YOU DOING?" Well, my angry friends, I can only report the facts. There was a white label PL12BONG29 but there was no actual promo 12". Incredibly annoying for fans and lovers of catalogue symmetry but what can you do? On the A-Side of PXL12BONG39 we have the rather lovely Just Can't Get Enough (Dirty South Mix). The label features the crown icon from Speak And Spell which is a wonderful touch. 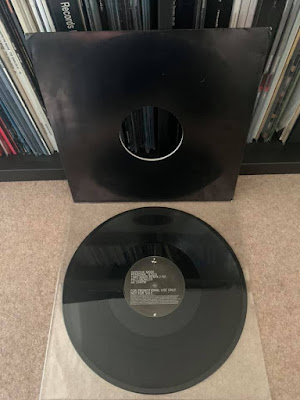 The B-Side has Personal Jesus (Timo Maas Remix) which is decent enough. The Violator rose appears on the label which is nice. 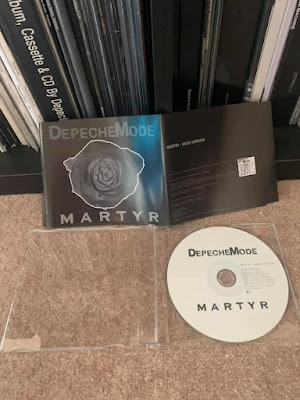 The firs of the promo CDs is RCDBONG39 which features on track only - Martyr (Radio Version). 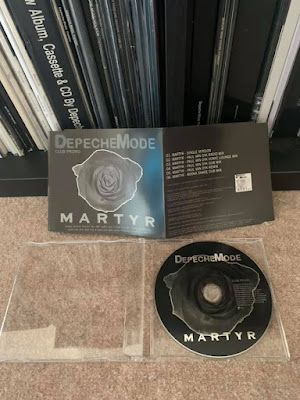 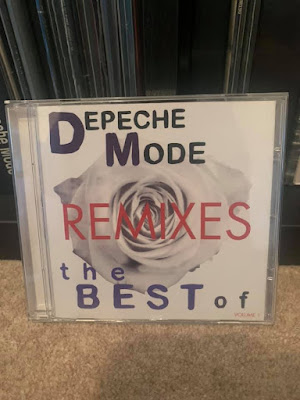 There is a third promo CD, PLCDBONG39. Unlike its missing 12" friend, this one exists. It's a lovely thing. 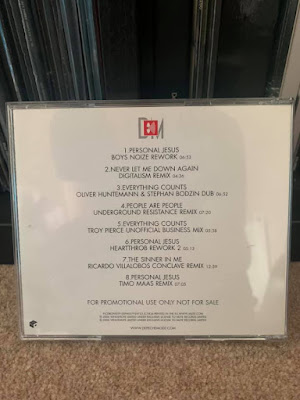 There are eight remixes on it and, the pointless The Sinner In Me remix aside, they're all rather good. 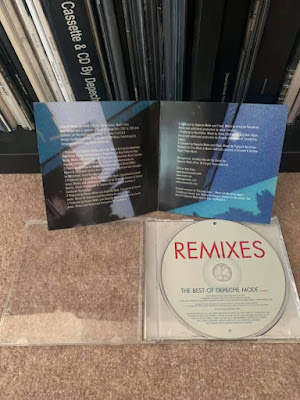 If you are going to buy this, beware of bootlegs. There is a version with the audio sourced from mp3. You can tell you have that one as it has no mould SID code, no Mediamotion logo in the matrix area and the text is different on the CD. There is another bootleg with blue text on the CD. 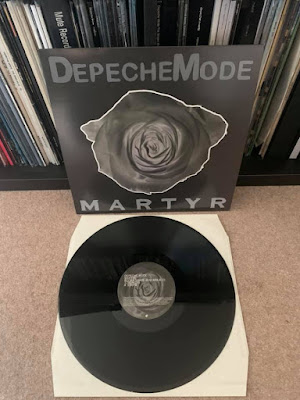 In offical releases, 12BONG39 comes with an embossed sleeve. The ridge of the rose is the embossed bit. On Side A (above) we have Martyr (Booka Shade Dub) which is alright but not that exciting. 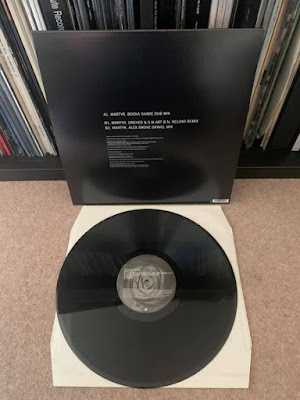 Side B has two tracks, both remixes of Martyr -  Dreher & S.M. Art B.N. Reload Remix and Alex Smoke Gravel Mix. The second one is the best remix on the 12". 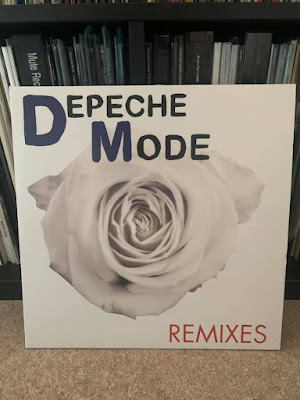 L12BONG39 is an absolute gem. It is a double 12" and comes in an embossed spot-varnished gatefold sleeve and is full of good things. 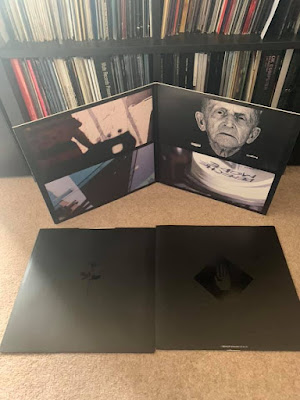 The inner sleeve of the gatefold features four pictures from the videos of the four tracks that feature on the records. The vinyl sleevs are spot-varnished and are glorious. Sides A and C are shown above. The icon matches the song on the remix. I will never tire of the Construction Time Again era logos. 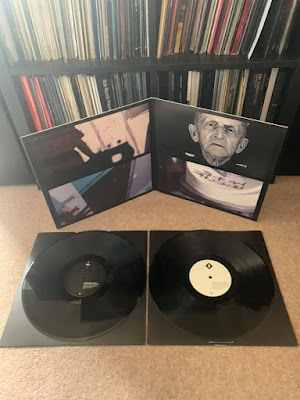 Side A (left above) features Personal Jesus (Boys Noize Rework) which is pretty good. Side C features the outstanding Everything Counts (Oliver Huntemann & Stephan Bodzin Dub). The labels have the logos from the inner sleeves on them. Outstanding work. 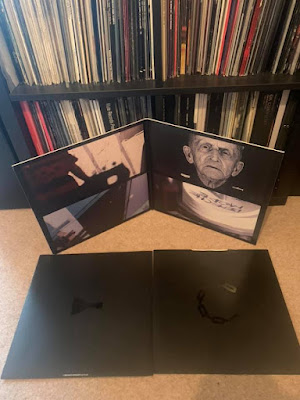 The inner sleeves for sides B and D reveal what is in store on the records. 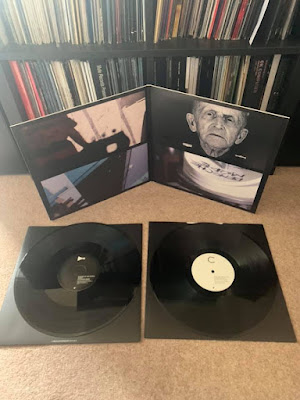 Side B (left above) contains the crunching beast of a remix that is Never Let Me Down Again (Digitalism Remix). It is fantastic. Side D has People Are People (Underground Resistance Remix). Again, the labels have the small logos on them and we all love that sort of thing. 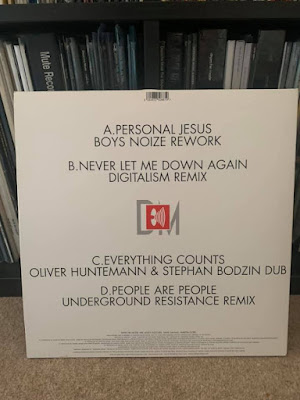 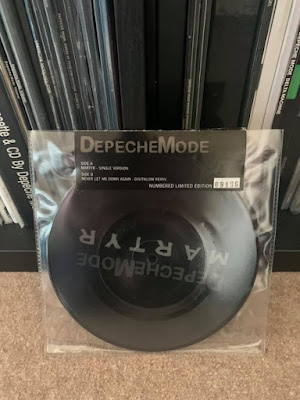 We got another 7" picture disc. It comes sealed in a plastic sleeve and is numbered. Annoyingly, mine is upside down so that makes my picture look odd. I love you all of course, but I wasn't prepared to open it to sort that out. Side A has the Single Version of Martyr. 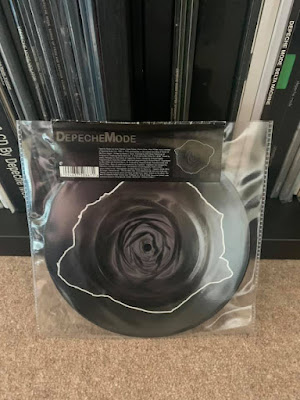 The B-Side features Never Let Me Down Again (Digitalism Remix) and that is never a bad thing. 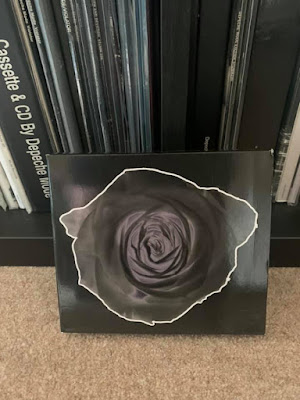 The two CDs and DVD again had a box to live in. 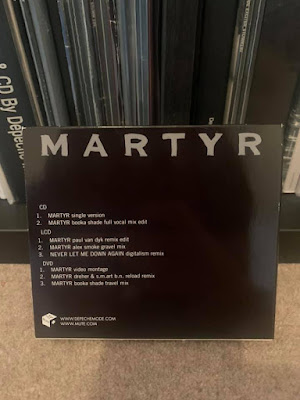 The back of the box told you all you need to know about the content. 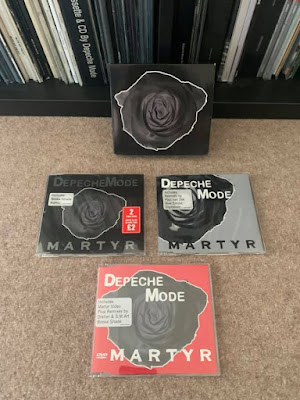 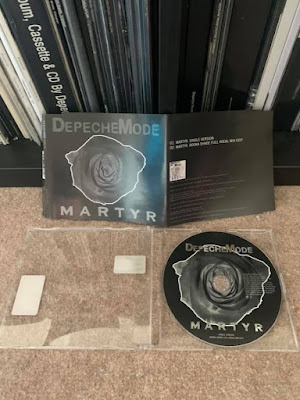 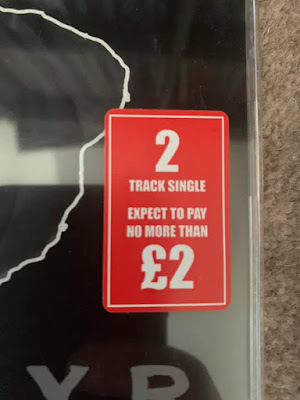 A sticker on the front told you what to pay, or at least what to expect to pay. 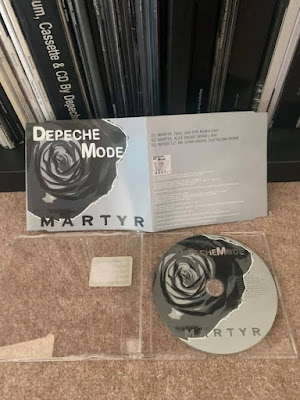 LCDBONG39 has two mixes of Martyr (Paul Van Dyk Remix Edit and Alex Smoke Gravel Mix) and the Digitalism Remix of Never Let Me Down Again. 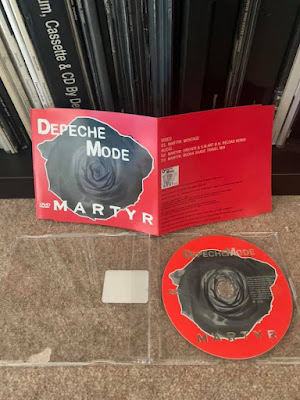 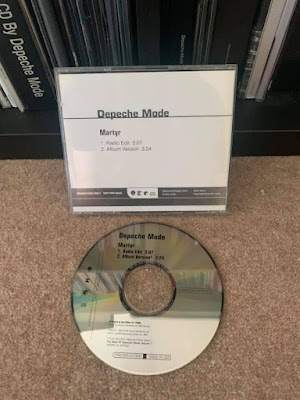 There was no physical release in the US but there were two promo CDs. The first (above) features two version of Martyr - Radio Edit and Album Version. The second promo CD has all of the remixes of Martyr that we saw above with the exception of the Alex Smoke Bare Bones Edit. 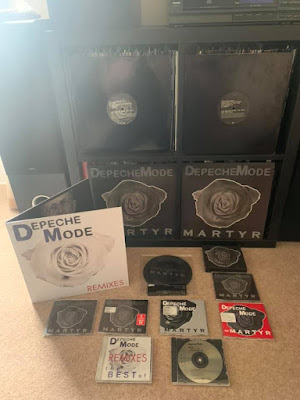 That was Martyr then, a single that most people probably forget exists and one the band did nothing at all to promote. The odd The Best Of Volume 1 followed and then Depeche Mode went into hibernation, waking up two and a half years later with the splendid Wrong and the, erm, album Sounds Of The Universe.
We'll look at Wrong next time.
Posted by DJM at 16:58