If you like pop music, you should like Erasure. Vince Clarke and Andy Bell have been responsible for some of the greatest British pop music ever released with tracks like A Little Respect, Love To Hate You and Blue Savannah known to anyone who has listened to music since the late 1980's . This year the band are celebrating their 30th anniversary which, for someone who grew up loving them at high school, makes me feel very old indeed. 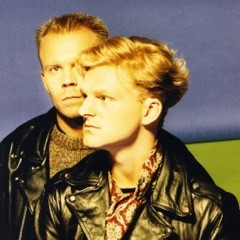 Anniversary celebrations are becoming more and more prevalent and whilst some seem a tad unnecessary, Erasure's celebration is more than warranted. To kick it off, the band are releasing Sometimes (2015)  on 23 October. It's a brand new remix by David Wrench and, as you can hear below, it's a superb take on Erasure's breakthrough single. Instead of mucking around with the song, Wrench has made a few subtle tweaks and beefed it up where it needs beefed up. Impressive stuff indeed.

The single is followed by a new best of collection, Always - The Very Best Of Erasure on 30 October. You might wonder whether another best of is needed as we've thus far had Pop! The First 20 Hits (which along with Pet Shop Boys' Discography is the definitive British pop singles album), Hits! The Very Best Of Erasure, Total Pop! The First 40 Hits, Pop 2! The Second 20 Hits and Essential. The alcum will be released on CD, download and deluxe 3cd/download and it's the latter that really grabs your attention. Yes, the single cd version contains what is basically the manual on how to write classic pop, but I'd be surprised if any Erasure fans didn't have all its songs in many different formats already. The two additional cd will be what the band's fans really want to get their hands on as they contain a number of classic and originally released only on limited edition 12" and cd single remixes, together with four brand new mixes. The tracklisting for the album is:

There are so many classic Erasure remixes on there that you really should check out if you haven't already heard them. The likes of Drama! (Krucial Remix), Chorus (Vegan Mix) and A Little Respect (Big Train Remix) hark back to a time when remixes were proper remixes rather than just generic club nonsense. I'd highly recommend the 3CD verison of this release.

The band aren't stopping there either. 2016 will see a deluxe super box set reissue of the band's 1985 debut album Wonderland which will come stuffed to the gills with all manner of good things. A 180g vinyl reissue campaign of the band's first three albums, Wonderland, The Circus and The Innocents will kick off in February 2016 too. Here's hoping the reissues continue with a reissue of Chorus, which for me is the band's best work and one of the definitive electronic pop albums.