Today's review is an absolute cracker. Steav Hunt tells us all about reserved Finns, making Depeche logos in ice, eating elk and, oh yes, Depeche Mode. As you'll see, Steav is a long terms Depeche fan and I'm already jealous that he saw them back in 1982. I fully agree with Steav's views about travelling to see Depeche Mode. I'm so glad that I've done that on the last couple of tours as itr's been a great experience and it's also allowed me to hassle bemused fans with blog business cards. Anyway, thanks very much Steav for the great review and for the photos. 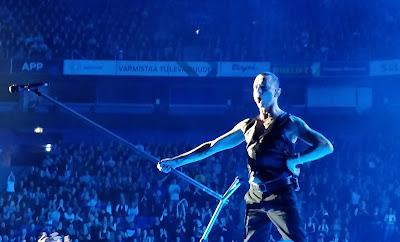 First of all, let me thank David for giving me the opportunity to contribute to the Almost Predictable Almost blog. To have reviews of every DM gig on the Global Spirit Tour is quite an ambition and I’m honoured to a part of it.

I’m now married and luckily for me Marie is just as big a fan as myself. She doesn't pass up the opportunity to shout filth at Dave :-)

For us, this will be the eighth gig on the Global Spirit Tour, and the very first time we have visited a Scandinavian country. Marie has been looking at the weather forecast and decided to purchase various items of thermal clothing. In the UK we very rarely have temperatures below -5. Forecast for Helsinki is -10.

We have been rained on at London Stadium, and experienced a storm at the Olympic Stadium in Berlin, so a bit of cold wont put us off.

I have to say that if any devotee from the UK hasn’t experienced a DM gig in another country, please please make the effort. Travelling in Europe is a lot easier and cheaper than the UK, and you get to meet some fantastic people. 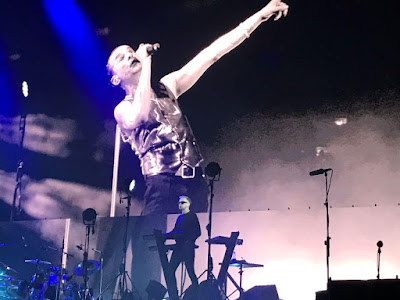 We departed Manchester Airport on Saturday 17th Feb for a direct flight to Helsinki. Coming into land at the airport all I could see was a beautiful white landscape stretching out for miles and miles. Helsinki airport is a big modern affair, with ‘Retail Opportunities’ at every turn. Once through passport control we found our way to the railway station which is between terminal 1 and 2. Trains run every 20 mins or so directly into the city centre.

Our hotel was 5 mins walk from the rail station, so we went to check in before heading out for something to eat.

Helsinki is a beautiful city and I think well worth a visit even if DM aren’t playing. We will certainly be going back. There are excellent restaurants, and despite what we had read, it is possible to eat cheaply. Beer on the other hand……………. Is excellent but NOT cheap.

Another plus (especially for British tourists) is that everyone speaks English, and I think, Swedish in addition to their native language.

Saturday night we dined upon Reindeer and Elk. It had to be done :-)

Sunday morning (after some confusion as Finland is two hours in front of the UK) we set out and did loads of tourist stuff. Drank loads of coffee, walked across the frozen harbour, ate reindeer hot-dogs etc etc. We also left DM logo’s in the ice and snow at various points around the city, more for our own amusement than anything else. 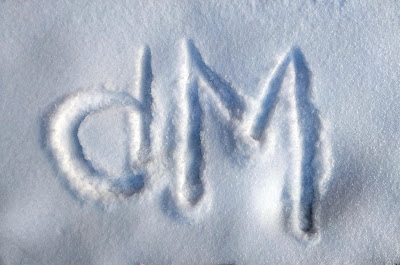 Later that day we were going to meet up with our very good friend Norbert (Nobby) from Hamburg whom we had met at the ‘Puskas Ferenc’ Stadium, Budapest Gig on the Delta Machine Tour in 2013. We have stayed in contact ever since. Helsinki will be his 22nd gig on the Global Spirit Tour, and his 51st DM gig in total. Hows that for Devotion? He texted us to arrange a meet at the Hard Rock Cafe for 5pm.

Later I got another text from him asking if we could meet up with some Swedish people at 4pm in the Radisson Hotel. So off we trekked to what we hoped was the correct Radisson hotel as there are four in Helsinki. After some confusion at the check in desk at the hotel we established that this was indeed the correct hotel and spent the next couple of hours talking and making new friends with people from Finland, Sweden and the UK. Nobby, Marie and I left the hotel at about 18:30 for something to eat before getting the train to Pasila (nearest station to Hartwall Arena). The rest of the gang had organised a mini bus direct to the Arena. 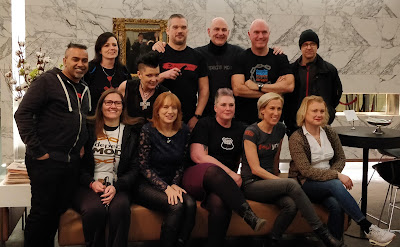 Now at the Arena (a modest building with approx 15000 capacity) the excitement starts to build. Every is here for the same reason. We want to hear our favourite band play our favourite songs and feel the volume in our bodies. Are we mad?

Bearing in mind its very cold outside and we are all wearing coats, we were a little taken aback at that both cloakroom facilities they had run out of space and couldn't take any more items. We were in GA, so had to carry our stuff with us. Minor setback.

Now this is where I start to think that the evening might not have as much atmosphere as our previous gigs. Bearing in mind we had arrived after the support band had finished, and only 30 mins before DM are due on stage, we managed to walk all the way to the front and stood on the right side of the walkway which Dave uses. The only other time we were able to do this was Manchester where we had EE/FOS tickets. Strange!

Marie thought this was great as she may be able to make herself heard to Dave when she shouts obscenities :-) 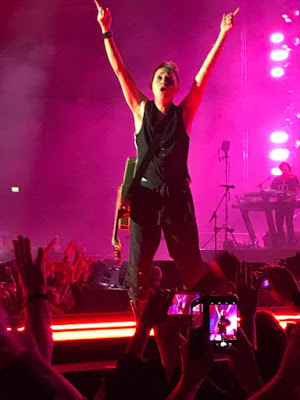 They're here, we’re happy. The band are on form and really tight.

Acoustics not the best with some echoing, but this is primarily an Ice Hockey Stadium.

At this point we looked around the Arena to see most people in the seats still sitting down. What!!!! I looked up to the block to stage right and the only people standing/dancing were 2 girls (later discovered that they were Russian) and one of our new friends ‘Big’ Magnus. From that moment on we worried that the band weren't going down as well as we thought. ‘Come on people, you’re letting me down’

Anyway, firm favourites were played, Home always makes me cry, video to In Your Room is superb (in fact takes focus away from band), Stripped, Walking In My Shoes and we danced like crazy things during Everything Counts, waiting for the ‘Helsinki, you really are the best!’.

Then before you know what's happened, nearly two hours have passed and the band are taking their bows, and Dave says ‘See you next time’ We are happy, but also a little concerned about the lack of audience participation in the seats. FOS are always going to be on form, and they were! Even during Never Let Me Down Again there were areas in the Arena with no arm waving. 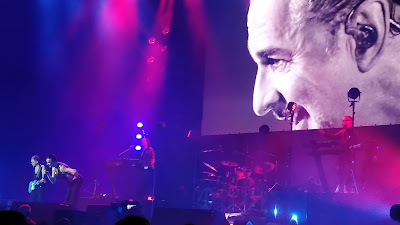 Hmmmm, I am concerned.

Did people not have a good time?

It was excellent to see the Russian DM fan club at walkway end having their photo taken. They are mental!!!!!

Anyway, I texted our new friend Peter, and there is space in his minibus to take an extra three back into town direct to the Lady Moon Club for the Club Anvil afterparty. On the minibus we have a discussion about audience participation, and everyone who had seated tickets said the same thing. Everyone around refused to get up and dance/clap/wave arms etc. It hadn't dampened our enthusiasm or enjoyment, but I am still concerned :-(

There followed much dancing and drinking (isn't Finnish Vodka good ;-)) and back to hotel for about 04:00am.

The following morning, it was still on my mind about the reserved audience, so whilst checking out of the hotel I asked the receptionist about Finnish people, and how reserved they seem to be. She stated that ‘Yes’ the Finnish people are famous for it, and that they will have have enjoyed the gig and would have shown their appreciation in other ways. Thank god for that! My mind is now at rest.

Back to the Hard Rock Cafe for a last meal and meeting with new friends before we head off to the airport going our separate ways :-( Always the saddest part.

Two other guys join us, both are from Sweden, and I have the discussion with one of them about Christian Eigner’s role in the band. Drum machine vs live drummer. This could go on for some time.

We also have the discussion about whether or not we are experiencing DM’s last BIG tour.

Lets face it, this is NOT a ‘Global Spirit’ tour, its a ‘Greatest Hits’ tour with three songs from the Spirit album thrown in. I still think that So Much Love should be put back into the set. And……….. they’re not getting any younger.

And so it ends. The sad goodbyes, exchanging of FB contact details and promises that we will all meet up in Berlin in July.

I feel VERY jealous that Nobby and Peter are going onto Riga. But hey, lets all look forward to Berlin and meeting up again.

Thanks to my good very friend Nobby (No R-Bert), and new friends Peter, Josefin, Lorraine, Jenny, Kimmo, David, Therese, Susanne, ‘Big’ Magnus, Valerie, Jenny and Sara for making this trip so VERY special. Thanks to Helsinki and Finland for being so very beautiful.

And my last point, as I’ve said previously. If you’re in the UK and thinking about going abroad for a gig, ‘just do it’ to coin a phrase, Its easier that you would think. You wont regret it.

Addendum – When back at home I Googled ‘Finnish people reserved’ and found this:-

P.S. Almost forgot. Looking forward to meeting the owner of this Blog, David McElroy, in Berlin in July :-)