This review is by Thomas Wargocki from Vienna. Thomas runs the Austrian Depeche Mode fansite Depeche Mode AT  on Facebook, a site I'd highly recommend. Following his hometown show on 4 February, Thomas was struck down with the flu, a fate that has befallen a number of reviewers. I assure you that it's not a side effect of writing for this blog. Anyway, happily Thomas is now better and here is his excellent Vienna review. All pictures are from the Black Cat Net site. I've used some of Dani's pictures previously on this project. If you haven't checked out her work, do that once you've read Thomas' review - she's got some sensational pictures of this tour and many other artists' shows. 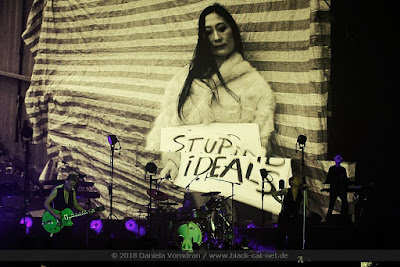 Four years after their last visit, the British synth pop kings Depeche Mode shone in a full to the brim Viennese town hall with a set stacked more than three decades of band history. Dave proved impressively at 55 that with his intense voice and impeccable stage presence, that he is one of the best front men in the world.

In the indoor of their almost two-year long "Global Spirit Tour" , they finally visit  Vienna - almost to the day exactly four years after their last gig here. A return visit here by the British there is long overdue. Depeche Mode have always been good to Austria and thousands of Austrians are good to their favorite band. The organizers were able to hang the "sold out" sign out weeks before the concert at the Wiener Stadthalle. An unmistakable sign that Dave Gahan and Co. have lost none of their paralyzing fascination even after 38 years of  their career. 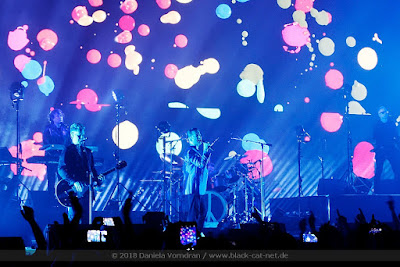 With their last studio album Spirit, released in March 2017, the band went on the offensive and articulated unexpectedly politically views. Precarious times require special measures - it's therefore a pity that hardly anything from the album can be seen on this tour. Only three songs of this strong work remain in the setlist this evening. The single Where's The Revolution clearly stands out due to the theatrical gestures by Dave. Resist and defend the beginnings. Do not like anything. Do not let yourself be crushed. The message arrives, but evaporates in the wake of enthusiasm.

And how well Dave does this job! One may not think it possible that the constantly pirouetting dancer on the stage front is 55 years old, so light-footed and nonchalant  as he whirls from one corner to the other, without getting short of breath. Behind him, the Austrian export Christian Eigner drills precisely like clockwork on his drums. To the left of him,  Andy is sometimes a bit lost behind his keyboard. On his right, Martin Gore with urgent guitar melodies acting as the backdrop for the hedonistic Sunday Mass. Songs like Barrel Of A Gun, Everything Counts or World In My Eyes are the sound of a band unmistakably sticking to its best decades, yet the anthems from the early days create an atmosphere of pleasant timelessness. The examination of the past is intensified by an unusually powerful and compact sound, which unfortunately is far too rare to hear in Vienna's largest concert indoor location. 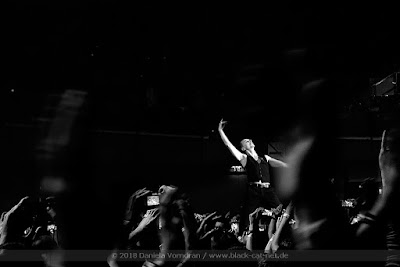 Even though the stage is no place for speeches, Dave thanks the audience again and again to the cheering delight of the fans. He conducts the crowd from the front of the stage and then again from in front of the gigantic video wall. He is quite the ringleader - much more so than he was 30 years ago. Before the big hits come, the band romp through the first half of the set with a colourful potpourri of their most diverse tracks. For example, there's the heavy Going Backwards for the opener, the intense and outstanding Precious and the industrially cool A Pain That I'm Used To. The only significant weakness in the evening is the unintentional destruction of the arc of suspense. Following the terrific Cover Me with Martin's acoustic Insight slows the show down too much. 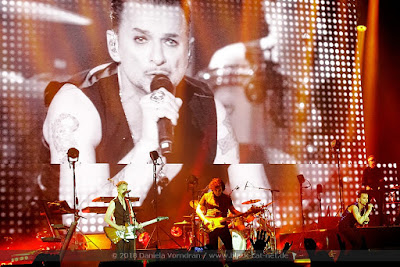 The same thing happens towards the end of the set. With Stripped, Enjoy The Silence and Never Let Me Down Again, the boys fire three of their greatest hits one after the other into the hall and provide a euphoria. Even if, instead of the ultimate more than two hour concert, the band had ended the set here, it would have been a fitting finale. The acoustic Strangelove, sung by Martin, in as unnecessary dampener, starting off the encore slowly. Even with Walking In My Shoes, A Question Of Time and the final Personal Jesus following it, the sets fails to ignite once more into a rousing finish. However, no-one is dissatisfied or disgruntled tonight. A Depeche Mode gig is still high class entertainment on the verge of perfection and that can only be said of a very few bands in the Champions League of touring bands today.

Hopefully see you next time!!!!