The Global Spirit Tour kicked off tonight in Stockholm in fine style, with Depeche Mode putting on a display that matched the energy that runs through the wonderful Spirit, creating a set list that not only saw the new songs fit in seamlessly, but one which also breathed life into a seemingly endless run of back catalogue classics. Spoilers will follow from this point, so if you don't want to know what happened, look away now. 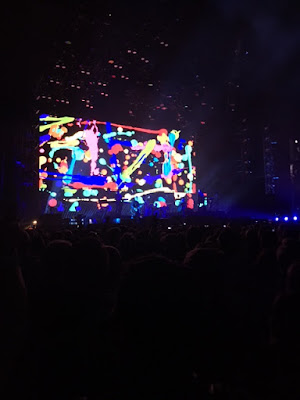 As with the pre-tour shows, the set opened with Going Backwards (above) and So Much Love. Rather wonderfully however, once Martin's traditional pre show techno set ended, The Beatles' Revolution was partially played, before the boots from the front of Spirit marched towards us over the background of (I think) a remix of Where's The Revolution, prior to the show kicking off. Anton's stage design and films have been much maligned in recent tours, but this time, he's been rather clever. The usual screen is there of course, but there's a raised level behind Christian's drum riser and it was on there that Dave appeared as Going Backwards began and the effect was quite wonderful. It really is a powerful opener and already something of a Depeche classic. So Much Love is more powerful live than recorded and it's backed with a wonderful Anton film (below), showing the band performing it outdoors as a tight knit three piece and that is quite simply a glorious thing, What a start. 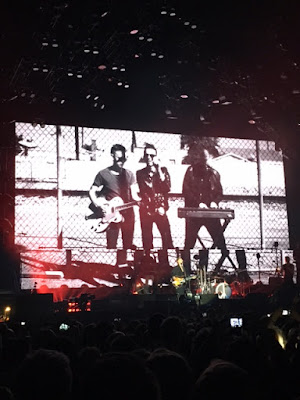 We then hit a run of three tracks that graced the pre-tour shows, starting with Barrel Of A Gun which seems to have finally found its feet, all dark power and gloriously gloomy metallic majesty. A Pain That I'm Used To came next, Peter Gordeno on bass duties of course, before Corrupt ended what you might call the familiar part of the set. I have grown to love this song since the Barrowlands gig and it sounded epic in a stadium setting.

The first surprise of the night followed with In Your Room.  How is that a surprise you might ask and you 'd be right to. Here's why - this was the album version, not the Zephyr Mix version that has clogged up the latter part of setlists in the last few tours. A full on, Songs Of Faith And Devotion friendly version that even features Martin singing the "wooaaaaah" parts after lines such as "Will you let the morning come soon?" to quite spectacular and downright gorgeous effect. The album version of In Your Room! I was blown away by it. Wow, wow, wow. The pre-tour version of World In My Eyes followed, all slinky and Kraftwerky in its electronic glory, before the majestic Cover Me arrived.  If Dave never writes a song again he can relax knowing that he wrote something this glorious. Against a backdrop of another black and white Anton film showing Dave as a spaceman wandering the earth looking sad yet incredibly rockstarish (Is Dave the spaceman from the Never Let Me Down Again film from 93/94?), the first half of the song flowed wonderfully, before the second half lifted the crowd up, transporting them to the stars with Dave, as its Krautrock synth symphony worked its magic. It's very much to Dave's credit that this song already feels very much part of the Depeche Mode landscape. It's undeniably brilliant. 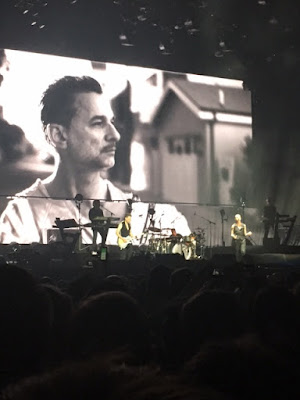 As seasoned Depeche watchers no doubt expect, Dave then headed off for a much deserved break, leaving Martin to sing a full band version of Home and a piano version of A Question Of Lust. Yes I've heard both before many times, and, yes, I wish Martin had perhaps been a tad braver in his choices, but I got to see him sing A Question Of Lust live and that can never, ever be a bad thing. Dave then popped back up ontstage to sing Poison Heart, faithful to the album version and sounding a little restrained. It will come into its own as the tour progresses though, and the "Ohhh-ohhh-ohhh" parts are destined to become sing along classics. Our last song from Spirit followed with Where's The Revolution, a song that was built for huge stadia like Friends Arena, Dave took to the raised part of the stage again here, recalling his preaching role in the video and it added to the song's rabble rousing atmosphere nicely. Surprise number two came next with Wrong returning to the set. It started off in a remixed fashion, before turning into the sort of stomping version the song should have had on the Tour Of The Universe. It really worked coming straight after Where's The Revolution.

Two surprises are nice, but a third would surely spoil us wouldn't it? Well spoiled we are, because, after a techno type remix intro that I must say fooled me, a familiar metallic scraping noise arrived and, all of a sudden we were being insincere in Korea. Yes, it's Everything Counts, and I make no apologies for losing my marbles when that came on. Of course, it fits perfectly with Spirit's themes and it makes absolute sense for the song to feature in the setlist, but all that aside, Everything Counts  could be the only song that played and it would never fail to make me grin like a lunatic. Welcome back you delicious beauty. 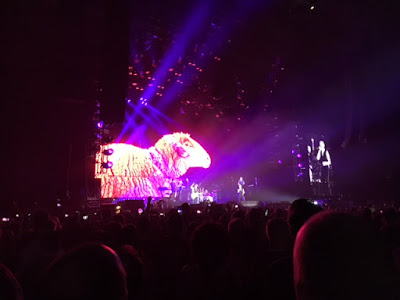 By this point we were in full flow and the main set ended on three songs most bands would give their entire careers to even half emulate - Stipped, Enjoy The Silence and Never Let Me Down Again, the latter of which sounded as powerful as all the bombs in the world going off at the same time. Those three songs played in a row, coming at the end of what has been a relentless, powerful set, with a band rejuvenated and on their best form in years is truly something to behold. It's at times like these that you wonder how some people can say they don't like Depeche Mode. How can that even be possible? As an aside, Anton's film for Enjoy The Silence (above) was remarkable. It features, among other animals, a sheep, a cow, a horse, a rabbit and a chicken, all hanging around looking bemused. Oddly, it works, although I have no idea what it means conceptually. Moo-sic for the Masses maybe?

Unusually, there was only one encore, but it was 5 songs long and ended the night on a high. It opened with the traditional Martin slot and he sung Somebody. Perhaps you might think it's a bit of a safe choice and a bit overplayed, but it sounded lovely tonight. Walking In My Shoes followed it and it is the same version as the pre tour shows, if anything sounding even more powerful. What a song. I will never tire of it, We then for the final surprise of the night, a surprise that seemed to take everyone's breath away, as the band launched into a cover of David Bowie's "Heroes." Soncially, it was a very modern day Depeche take on the song, with Martin's guitar backing up Dave's vocals nicely and it was played against a backdrop of a black version of one of the flags from the Spirit cover in a fitting tribute to Bowie. It's hard to play a cover of that song and get away with it, but Depeche did, perhaps because, without that song and Vince Clarke overhearing Dave sing it, we wouldn't have Depeche Mode in the first place. 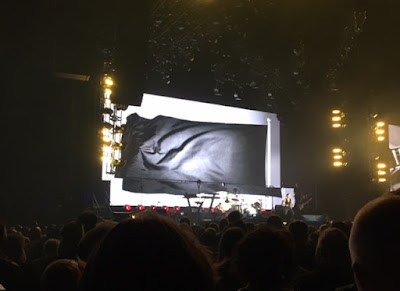 All good things must end, and that means Depeche must finally call it a night, They ended with blistering versions of  I Feel You (another old song that sounds more alive than ever) and Personal Jesus, leaving the crowd simultaneously wanting more and feeling like they'd had the Depeche Mode gig of their lives. A stunning show and, if this is just the tour opener, then we are going to be in for a treat over the next twelve months or so.

Spirit showed that there is still a lot of life in Depeche Mode and that alone was a wonderful thing. To see them follow their best album in 20 years with a show as alive and as thrilling as this is another thing altogether. Do all you can to get a ticket for one of the Global Spirit Tour gig. There are very few bands left like Depeche Mode and, in all honesty, when they are on this form, there are no others that can touch them as a live act. Get on board.