This venue definitely wins the title of Venue Name Of The Tour - spectacular stuff. Equally spectacular is this review from Rob Rohm from Orange County, California, a man who really knows his Depeche Mode. Rob's review is a great read which I know you'll all enjoy. Thanks very much Rob for the write up, pictures and videos. Thanks too to the by now surely fed up of me stealing things gang at Depeche Mode Classic Photos & Videos Facebook Group whose pictures I've credited. Don't want to get in trouble. 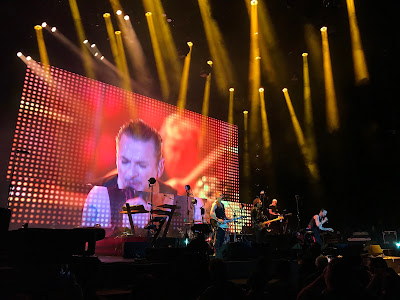 October 6, 2017 - Mattress Firm Amphitheatre is the name of the venue hosting Depeche Mode on this warm fall night in Chula Vista, California. The name of the venue can cause you to do a double take. Although it's named after one of the largest mattress retailers in the US, it evokes sexual imagery and innuendo more than anything else. What better place for Depeche Mode to perform songs such as Corrupt, In Your Room, World in My Eyes, A Question of Lust, and Stripped.

Although the venue sufficiently warned fans to get to the amphitheatre early to avoid traffic, it was truly a traffic nightmare getting in to the show. My home is located in Orange County, California. It's about an hour and a half drive south to Mattress Firm without any traffic. The last two miles took more time than that. Unfortunately for us, we trusted the judgment of Google Maps for the quickest route into the venue. It guided us to a back route in with a single lane that was barely moving. The traffic coming in the traditional entrance was heavily bogged down as well but at least they had 3 lanes of cars moving. We made the mistake of having a few drinks at our hotel with friends before we left. We left our hotel at 6:30 for what should have been a thirty-minute drive at the most. After sitting in traffic for over an hour with no end in sight, my wife and her friends suggested that I walk the remainder and meet them inside. They knew I was to review the show for The Global Spirit Tour Project. I didn't want to miss a minute of the action, so I took them up on their offer and walked over a mile to the venue in my Doc Martins (Try Walking in My Shoes! Sorry, couldn't resist).

As I walked up to the venue I heard the opening act Warpaint but by the time I got inside they were done playing. Luckily I had caught them earlier in the week at Martin's hometown gig at the Santa Barbara Bowl. This is my fifth time seeing the band on the Global Spirit tour and 41st show all-time starting back in 1986. I was lucky enough this tour to see them at a private rehearsal with 40 others in Hollywood at S.I.R. Studios in April. They only performed 10 songs for us at the rehearsal but it was there that I first saw the exact 22 song set list that they performed in Chula Vista at the base of Martin Gore's microphone stand. 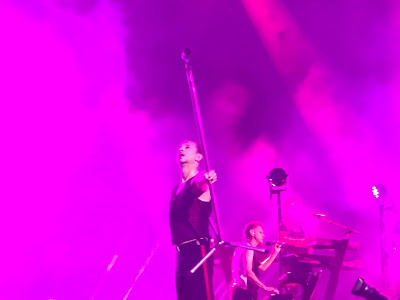 Once inside the venue, I took a peek at the merchandise booth to see if there were long lines (there were) and if there was anything new. I also checked to make sure they're still selling the cool Master and Servant shirt. I bought souvenirs at their Paris gig in July but haven't bought anything yet from the shows I've caught in the States (Vegas, Santa Barbara, and San Diego). I'm hoping they open a pop-up shop in Los Angeles for the Hollywood Bowl shows as they've done in New York and select shows in Europe.

I grabbed a beer and said hello to a few devotees before heading to my seat. For this show my ticket was third row from the stage on the left side (Martin's side). I texted my wife to check on her whereabouts and they were still slowly making their way to the venue. It was too late, the Beatles' Revolution was playing and they were still stuck in traffic! It was 9pm and the band was taking the stage.

The Spirit feet march into the show opener Going Backwards with its vibrant backdrop. This timely and relevant song is one of my favorite tracks on Spirit and a perfect way to kick things off. So Much Love and Barrel Of A Gun follow and my wife still hasn't made it into the venue yet! I'm glad to be inside watching but bummed when Peter Gordeno straps on the bass guitar and the band breaks into A Pain That I'm Used To. At the Santa Barbara show, my wife had told me that she really likes that song. It was actually a bit surprising to me that she said that but the version they perform on this tour is definitely one that you can't stop yourself from dancing to. Luckily she shows up mid song and immediately begins dancing and is quite happy with our view.

She is just in time for the Mattress Firm Trilogy: Corrupt, In Your Room, and World In My Eyes. On Corrupt, Dave's performance combines elements of hard rock, marching soldiers, and a sultry rock god all in one


In Your Room is one of my top ten favorite Depeche Mode tracks. Thankfully the band has reverted to playing the album version of the song which is a lot more powerful in my opinion. The song is accompanied by one of Anton's video creations but sitting up close my focus is on the band's performance and not the video.

World In My Eyes completes the Mattress Firm Trilogy with the crowd fully engaged. My wife commented about Dave putting his hands above his head to form the hand gesture shown on the cover of the World In My Eyes single. She mentioned first noticing him doing this in Paris.

Cover Me is accompanied by Anton's video footage used for the single release with Dave walking around Venice Beach in astronaut gear. This one is hard not to pay attention to the video. It's another one of those videos that make you question how much trust they give Anton but it is interesting I suppose.

I missed A Question Of Lust to make a beer run but it sounded great. I am surprised how little Martin's songs have changed this tour. Usually he mixes it up more. We did get to see Judas performed in Paris, but that's been the only set change I've seen in person so far this tour. It is rumored that there will be significant changes during the Hollywood Bowl shows. I'll be at the last 3 shows there. Home sounded great as usual and we actually had a pretty good round of ooohs going after the song was over.

Poison Heart really takes me back to the intimate rehearsal I saw in April. We were standing right in front of Martin during that performance and to watch his guitar work and emotion as he sang the backup vocals was pretty amazing.

Where's The Revolution is the fifth and final song they perform off Spirit. The visuals on this song are great as is the performance. Dave marches up the stairway to the second level stage area with his silhouette in front of socialist imagery provided by Anton.

Wrong and Everything Counts get the remix treatment and are fantastic performances and lead into my all-time favorite song, Stripped. I typically try to avoid filming too much but I did record the complete song for this one. I wanted to have a full clip of Stripped live as it may be one of the songs that gets changed up in Hollywood.


The last two songs before the encore actually elevate the show to the highest points. Besides being the classic powerful Depeche Mode songs that they are, Enjoy The Silence and Never Let Me Down Again are both crowd favorites. The audience interaction is at its best during these two songs and is highlighted by the classic waving of hands during Never Let Me Down Again. At this show Dave does not use the t-shirt cannon during the song.

The encore consisted of five songs as usual starting with Somebody performed by Martin, Walking In My Shoes featuring another Anton Corbijn video, the "Heroes" David Bowie tribute, I Feel You, and Personal Jesus.

I had a fantastic night at the show despite the pain I wasn't used to of getting into the show. I read some negative comments from some fans on social media after the show and I will say this: As with anything in life, your mode (mindset) will go a long way in determining how much you enjoy the show. The band definitely doesn't disappoint. It's amazing to see them perform at such a high level with so much energy and enthusiasm after all these years. I'm proud to say I've been a Devotee since 1985.