Today's review comes courtesy of Nadine Desiree from Wurzburg in Germany. After a mixed experience at the June Frankfurt show, Nadine got her second chance to see the Global Spirit Tour and thankfully loved it. Thanks for this great review Nadine and thank you very much for the pictures too. 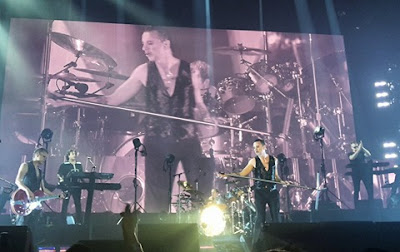 Writing this two days after the show in Frankfurt, I’m still surfing on a wave of happiness. It was my second show on the Global Spirit Tour and also my second Depeche Mode concert in total. I hadn’t been able to enjoy my first Depeche Mode concert the way it should be. Due to the inexorable heat at the day of their Frankfurt gig in June and some unpleasant and annoying incidents on my way to Frankfurt I had been exhausted before the show even started and couldn’t get into the right mood. So I was really excited about my second chance to see my favourite band live. And I wasn’t disappointed. It was how I’ve always imagined a Depeche Mode show to be like!

One of the reasons I favour indoor concerts over the great open air stadium shows is that the atmosphere is more intense. Band and fans come closer together. Right before the show started there was an electricity in the air like an upcoming thunderstorm foreshadowing perfectly what was about to come. Band and crowd were in best mood and it only took a few notes of Going Backwards to have everyone on the stands up on their feet. 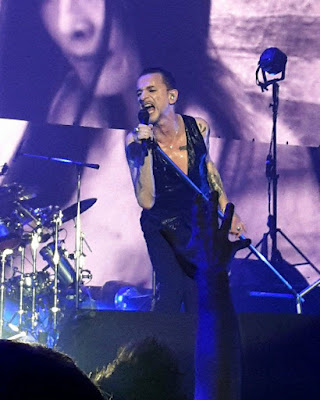 The whole setlist got the balance right between the powerful and barnstorming songs and the more silent and emotional moments. The first part of the show contained some of their more recent songs. Going Backwards did a great job as an opener. Despite its dark lyrics that perfectly sum up the problems of our time, its steady beat built up enough energy to throw everyone off their seats immediately. However the second half of the show was dedicated to the old classics. Songs like Never Let Me Down Again, Walking In My Shoes and Personal Jesus made for a brilliant finale. To my delight Precious and A Question Of Time also made it back on the setlist. Although the whole show was a highlight in itself, my personal highlights were Martin’s very emotional acoustic version of Insight and of course hearing them play my favourite song Enjoy The Silence. It only needed one synthesizer sound to make everyone go crazy. 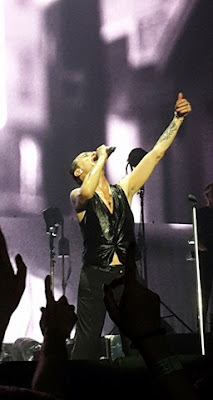 One other really remarkable thing about that concert was the atmosphere and connection between the fans. At concerts it’s never hard to meet new people. But among those many Depeche Mode fans there was a special feeling like being part of a big family. I went to the show alone, but I didn’t stay alone for more than ten minutes. We still had some hours to wait until the show started, but thanks to those amazing people around me the time flew by quickly. Having seen several other bands before I can say that was a treasured experience unique to Depeche Mode.