This review comes from Marta Masé who is from Marghera in Italy. As you will see, Marta had a superb time in Bologna and has a few more concerts to go on the Global Spirit Tour during which she'll introduce more friends and family to the best live band on earth. Other than the people I already know, Marta is one of the few Global Spirit Tour Project writers I've been lucky to meet as we got a chance to say hello in Manchester. Thanks very much for this review Marta and thanks for the superb pictures too. 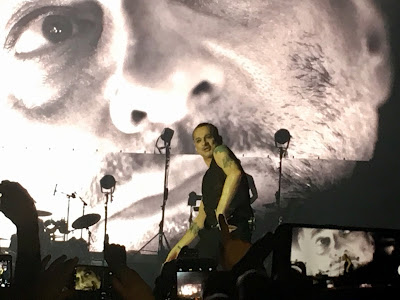 Depeche Mode have always been there, in the music background of my life: I owned the CDs, knew the lyrics to most of the songs but I never grew too attached. I never saw one of their gigs either, partly because my parents wouldn’t have allowed me to – I wish I had been rebellious enough to go behind their backs, but definitely I wasn’t! – partly because live music is something I appreciate much more nowadays. That’s why I thought it was about time I saw them live and, as soon as the dates of the Global Spirit Tour were out, I secured my tickets. I fell in love with Spirit and went back through their entire catalogue as a result, it’s been such a journey, each song in its own way strikes a chord at this point in my life! That’s all I have been listening to since October 2016, despite my family’s complaints and confident that the kids will benefit from it…never too late to become a devotee and never too early either!

The first gig I saw in Ljubljana simply cemented the passion. As Kevin May pointed out, Depeche Mode is a band that “pulls in different directions” and I must admit I wasn’t expecting such an elating atmosphere, a huge party involving all age groups. That was it, I was going to make up for lost time and enjoy this experience as much as I could…and it was easy to get my friends on board too, wasn’t it ladies?

After Ljubljana and Bologna in the summer and Manchester in November here we are, travelling to Bologna again! It’s a two-hour excitement-filled drive from Venice, the sort of first date type of excitement, butterflies and all…My friend Eva joins me this time, it’s her first DM concert so I’m particularly looking forward to seeing the gig through her eyes as well.

The Unipol arena is a more intimate setting than the 40.000 capacity outdoor football stadium of the summer leg. In June the inner pit experience blew me away, so I got standing tickets for this gig too – some devotion is surely required as they sell out fast! We are finally here, waiting for the doors to open at 7 pm, no early entry and lack of organization at the entrance and we miss the front of the stage area. We still manage to find a spot fairly near the end of the catwalk and wait for the show to begin with a group of die-hard fans, the mood is just right. By the time Pumarosa finish their set – the best support band so far, in my opinion – the arena is packed, I mean really packed, and the temperature feels like 40°. The intros begin, and the excitement grows. 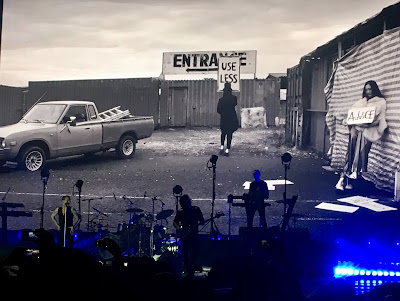 Some people would rather not know too much about the shows, I belong to the other kind, the ones who obsessively read about every detail (the Almost Predictable Almost blog being a fundamental part of this process!). I know what to expect, still the overall atmosphere can be so different each night. We all enjoy live music in our own way, that being said, my worst nightmare at any concert is being stuck in a spot where nobody stands up or takes part 100%. And this goes even more for a band as generous as DM, who clearly feed on the energy of their audience and, in return, deliver energetic, heartfelt, moving performances. It might sound weird, but my expectations are set higher on the audience as I am sure the band will never disappoint! Generally speaking the Italian crowd is quite the loud one and this time we are in a good place, but I am pretty amazed at seeing most people sitting down half way through the show.

I read many complaints about poor acoustic and yes, a few times Dave’s voice felt a bit overwhelmed by the instruments, but I can’t comment further on sounds and the setlist is well-known, so I’ll just go with my overall feelings of the songs. Going Backwards is a great opener, the combination of those first beats and Dave’s silhouette on the Pollock-like background works perfectly. I miss So Much Love but It’s No Good is such a classic and sets the audience singing from the beginning. Barrel Of A Gun is just ok for me. I read many don’t like the Jacques Lu Cont’s remix of A Pain That I’m Used To, I love its rhythm and dancing to it and Dave looks like he’s having a lot of fun too. Useless and Precious are well received new entries – a great new video comes with Useless and Precious is just so moving, perfect. Then comes World In My Eyes with the new backdrop and many hands raise in the audience. I feel Cover Me is a special moment in the show and I am so proud of Dave as an author. Mr Gahan tonight is in top form, he looks like he is having a good time, smiling more than usual, blowing kisses and skipping around, hard to believe he is 55. While he gives it all in his performance, he only spares a few words and the shout outs to the crowd are pretty much always the same, but we feel special anyway…Will you cover me…will ya? 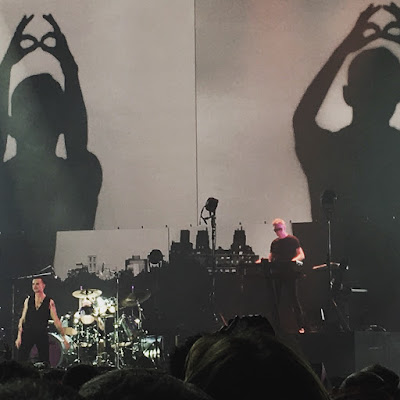 And then comes Martin’s turn. I prefer Insight performed by Dave (and Strangelove for that matter). Martin has so many others to choose from, but he creates such an atmosphere that when Home starts, I am emotional. However,  I feel the sing along tonight is not up to scratch to show him the appreciation he deserves. In Your Room has become my song, it brings the devotional mood and the video complements it perfectly (I am so missing the side screens, even though I am wearing my highest wedges I can’t see the band properly!). Where’s The Revolution then Everything Counts and the whole arena is on fire as Dave is back stomping on the catwalk – the projections of the stage replicated pyramid-style on the screen look great too. Stripped is not as strong but it’s followed by Enjoy The Silence and we are back on track singing our hearts out and reveling in this amazing moment. I don’t get the animals video at all, I feel it doesn’t add much to the song but the genius here is Anton not myself! 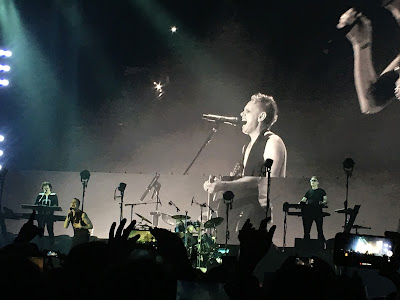 Never Let Me Down Again is powerful, you know what is coming, the expectation grows with the tune and finally everybody joins in the wave - I could live without the bazooka but it gives us one more chance to have Dave closer on the catwalk. This could be the perfect ending to any show but thankfully it’s not. The encore starts Strangelove by Martin then Walking In My Shoes - masterpiece, love the video, I would rather have it a bit earlier in the set though. Super energetic finale with A Question of Time – glad I heard I Feel You, but this is one of my favourites – and Personal Jesus to finish off, iconic is all I can say. I miss Halo and Policy of Truth but I still have hope for the second date in Milan.

Unfortunately, we can’t make it to the afterparty so what little energy we have left is spent driving back, sharing our emotions, already counting the days till the next one (45 by the way…). In case you were wondering, Eva had a blast and totally agrees tonight was awesome, I’m guessing she will join me again! 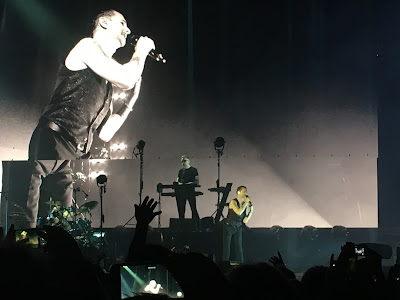 ‘Why do you keep going to the same gig from the same band?’ is the question I’ve been getting since May -‘at your age’ usually comes with it too. Great music, outstanding lyrics, unforgettable performances, amazing flow of energy between the band and the audience...isn’t this enough? Everybody in Bologna experienced it first-hand tonight, my kids will be next and even my mum will see “what all the fuss is about” in January in Milan. So, thank you Depeche Mode for such intense music and performances, to my family who doesn’t get it, yet, but puts up with me anyway, to all devotees who made tonight and all other gigs special and to my friends Federica, Rosanna and Eva, I will treasure these special moments forever.

See you in Milan, Milan and Berlin!