The first review of the fourth leg of the Global Spirit Tour is in and it's a great way to kick this leg's reviews off. The review is a joint effort by Natalia Burgos from Colombia and Jimena Parra who had a home gig as she is from Lima itself. From what I've seen of the Latin American shows, each one has been special with an incredible atmosphere and this review from Natalia and Jimena illustrates that perfectly. Thank you so much for the words and pictures Natalia and Jimena. 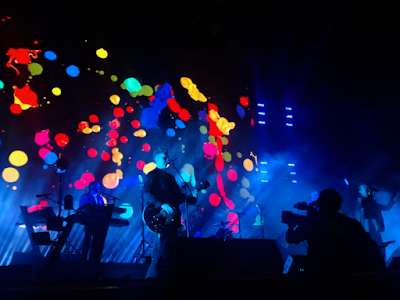 Being in Lima, it’s definitely a privilege to see Depeche Mode.  This concert was highly awaited in Peru since the announcement of the South American leg of the Global Spirit Tour a bit more than a year ago, and that’s a very long time to wait for DM's first performance in the country since 2009. I also wanted some local input (because I'm from Colombia), so I asked Jimena Parra to join in to help me capture more details, because I'm not very good at putting things down in words and I take really lousy photos (actually I don't take any, these gigs suck all my attention and energy), so she is a great ally.

Peru has the advantage of having very organised and active fanbases that have been persistent in spreading out the information about the band and the tour, promoting all kinds of events and celebrations to keep the devotion alive and kicking. I was very pleased to even see a DM themed exhibition called "World in my Eyes" (Jimena is one of the organisers) and even a special edition of the local drink "pisco" with beautiful Violator rose printed on the bottles. So in a nutshell, this is a pretty special place to be for a DM gig. I tip my hat to all of them.

Now to really dig into the subject. When the 18th of March finally arrived, there were already people in line at the National Stadium, from different corners of the world; it was a pleasant surprise to find devotees from La Paz Bolivia - they did a 30 hour bus trip-to get to Lima! (that proves devotion, isn't it?). We also saw groups of devotees from Ecuador, Chile and Argentina and an English fan too. This event was far from being a normal concert and people were waiting patiently for it.

The queue started from early in the morning (a few people started it on Saturday) and the organisers were on top of things, so the entry went smoothly and we got right into the front rows, near Martin’s side. That was a prize position after waiting for lots of hour under the hot sun.

The opening act was  a local band called Cementerio Inocentes, with a very interesting and loud vocalist. After this performance the Peruvian audience had to wait for an hour until the lights were turned off and the Beatles guitar riff for Revolution started to play. We all knew that we were in for a musical treat; we could see the tiny walking boots projected on the screens.

And after that, AT LAST, we had Depeche Mode on stage! The crowd was respectful, not too noisy, but Jimena and I were yelling and clapping most of the time. My goodness you don't see the Mode everyday down here! It's the opportunity of a lifetime. Out came Dave prancing for Going Backwards, we were seeing him right there, a few meters away from us, all dressed up in red and black, pairing with silver glitter boots (just like my fingernails :P).

Tracks like It's No Good, Barrel Of A Gun and A Pain That I'm Used To made the crowd dance. The projection during Useless attracted our attention, it's great to see Anton's recent work with DM in action. I am an Ultra lover and I have a feeling that the set list was tailor made for me!

After that DM played Precious, a song that appeals a lot to the fans here in South America, World In My Eyes featured Dave grabbing all his junk - see below! Cover Me was a highlight and that was when Dave did his first appearance on the catwalk. During all this first part of the show, Dave was very sexy with this dance moves, interacting with the audience.

Then it was Martin’s turn to run the show, with Insight and Home, my goodness, he's something like an angel performing, with his beautiful guitars, black finger nails and eyelids. He's appearance is almost supernatural; I'm always in awe of this absolutely wonderful man.

Then we got to witness the Spirit single, Where’s The Revolution, which had a good response from the audience, we could hear everybody singing.

That was followed by a bunch of classic tracks like Everything Counts (one of my personal faves during this tour), Stripped and the ever present Enjoy The Silence and Never Let me Down Again, with the arm waving part that is such an entertaining and beautiful sight.

After a brief encore the show continued with Martin’s very own version of Strangelove before Dave returned to stage with the delightful Walking In My Shoes, A Question Of Time and the big closer of the night Personal Jesus, leaving the crowd all pumped up. We always want more!

It's such an experience, I am so very glad to have had such amazing luck of seeing them live several times, surrounding myself with lovely and helpful devotees that enhance and make all this preparation process much more fun (and bearable). It's so exciting to get things together and meet up, it gives such a wonderful sense of community. I guess that it's all about, seeing the Mode with your soulsisters and soulbrothers :D

And hopefully we will see them next time in Latin America! It’s a daydream but you never know! 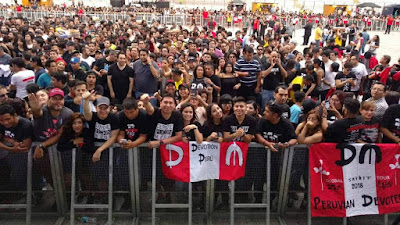 Thank you Natalia and Jimena!