The enthusiasm that has met Depeche Mode's Latin American leg of the Global Spirit Tour has been unsurprisingly incredible. The band's fans from that part of the world are rightly known for their love of the band and it's great that Depeche have played a good number of shows there this time round. Look at the crowd in that picture below for goodness sake - amazing. One of the Chilean Devotees and a fellow Depeche Mode Facebook Takeoveree is Roxana Villagran Lizana from Santiago and this is her review of the band's show in her hometown. Roxana manages to capture the spirit and intensity of the gig marvellously. Thanks for this and the pictures Roxana. 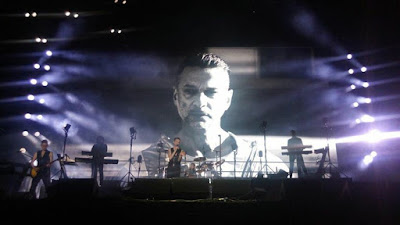 Dave's words of praise were the pinnacle of an intense journey, which started on the night of March 20 with a Devotee vigil outside the Stadium. A lot of friends and fans were waiting together, to get the best possible spot, near our band. And when the objective was accomplished, it was just a matter of time. 21.00 hrs sharp, the chords started to sound. It was Revolution, The Beatles, and from that point on... The magic, the crazy, the euphoria, the crying, the emotion...

It was worth the wait for the 47 thousand fans who were there. We had waited eight years to meet them again. 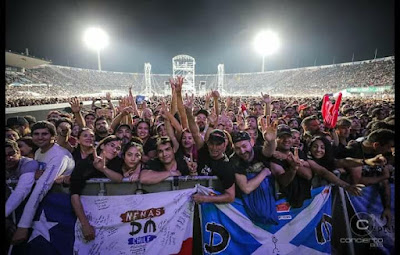 Some sort of very coloured painting, and Dave's silhouette moving in the background led to Going Backwards, unleashing the excitement of the Chilean devotees. While Dave was turning around with his arms wide open, It's No Good started, and the three black and white screens lit up,  letting us saw the band for the first time. Afterwards, Barrel Of A Gun and A Pain That I'm Used To came along, where the frontman ran and danced on the walkway that went into the VIP section of the crowd.

His perfect voice and rhythmic movements continued with Useless. Andy's chords unleashed the screams of those who recognised Precious as the next song and by its end, Dave's butt was shaking front and centre in the stadium's screens. World In My Eyes came straight after and everyone started to dance along with it. Martin Gore played the emotional Insight and Home, which ended with the public singing along with the famous last notes. But the voices in Ñuñoa's place did not stop with the song, for Dave decided to keep encouraging us like an orchestra director.

The screens showed a couple dancing, and then In Your Room was introduced, where the mic stand became Dave's dance partner (and made us girls imagine we were that stand). Dancing was left behind for a while however with Where's The Revolution. Classics Everything Counts and Stripped were sung along with loudly, until the famous synth announced Enjoy The Silence, which made everyone reach for their cellphones to immortalise the moment. The main set ended, crowned with Never Let Me Down Again. Martin was in charge for the encore when the band returned, with an acoustic version of  Strangelove. The band's third visit to Chile ended with Personal Jesus, leaving us immensely happy. Long live Depeche Mode, and what they join, let nothing split it apart.