When I started this nonsense off, I wondered how many gigs I would able to cover as I presumed that people would say thanks but not thanks to any review request. Happily and to my eternal surprise and delight, that has proved to be wrong and, as you've seen, many people have given up their time to take part. It continually amazes me. Anyway, by the time the St Petersburg gig was about to start, I had no reviewer lined up. It had nearly happened in Hamburg until Claudia, Thomas and Michael saved the day, but this time, I was convinced that I'd run out of luck. But no! Marcel De Groot, a Facebook friend of mine and hereafter known as the saviour of St Petersburg, stepped in and suggested Jan Ronald Stange from Notteroy, Norway as he knew Jan was there. So here is Jan's review. As you'll see in the link at the end of Jan's review, he also writes for Sideline among others, so make sure you check out his other work. Thanks so much for stepping in Jan and thank you for this great review with accompanying pictures (all Jan's unless credited otherwise). I owe you one!

For over 30 years, actually since the Black Celebration Tour in 1986, I’ve been attending every tour at least once, sometimes more, and will probably set a record with five concerts this tour. Most concerts, including the first and the last, have been with my lifelong friend John-Erik, and when we saw the 2nd European leg being added we started discussing where we should go. Initially we considered Helsinki, but the floor were quickly sold out, and after having being poorly seated at our first concert of the tour in Stockholm we didn’t want crappy seats again!

The closest concert, which also was close to the weekend, was St. Petersburg – in a country we hadn’t been before, and would also the easternmost place we’ve seen DM.

Feb. 15th: After some hassle with visas a few weeks before, we were finally on our way from Oslo, and with 6 hours between transfers in Riga we managed to see some of this city too. Arriving in St. Petersburg, we hit the bars at Nevsky Prospect, looking for a “secret” beer place, Beer Geek, well hidden in a backyard. We found it. And later when having a late dinner we even ended up talking to some girls who actually knew what Depeche Mode was – or so they claimed, probably chatting us up to get us to go to a “friends new bar” ;)

Feb 16th: Concert day! Started with a lunch where we met up with a Russian contact of John-Erik, Dmitri, who was there both for the concert and some DM CD’s brought to him from Norway. A bit funny when we found out he and his wife actually had traveled a longer distance than us, as their home city of Izhevsk was further inland in Russia and in our opposite direction.

The rest of the day before the concert was spent strolling around St. Petersburg, including a visit to Kazan Cathedral, the most DM related name there. After seeing all the the icon-kissing Russians one might wonder about the actual meaning when naming the PJ remix… satirical I hope!

Approaching the SKK stadium made us feel the closest to “home” as St. Petersburg could offer – not a familiar face in sight, yet a similar feeling to other venues where the Black Swarm would gather… weird, isn’t it?! Just proves once again that, after all, people are people.

All prejudices against vodka-drunken Russians gave way to a calm, but excited, ambience among the people in line and inside the stadium. Maybe not so surprising after all – they only sold coffee and Budweiser (!!!) there. And no drinks were allowed inside the actual venue either, so no worrying about people spilling beer during the concert. 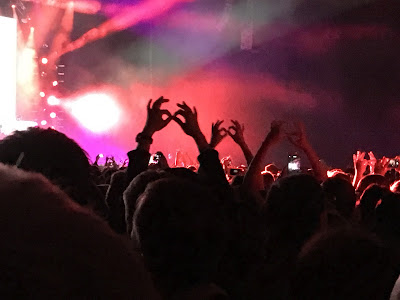 Not having seen Black Line before, we were there just a few minutes before they got on stage. Douglas McCarthy & co played seven energetic songs in their warm-up set – well worth seeing!

The concert itself was excellent; no surprises though, and same setlist as the previous in Minsk and the next in Helsikini. Hearing Martin sing I Want You Now was probably the biggest treat, haven’t heard that one at my previous concerts in Stockholm or London. Having It’s No Good, Barrel Of A Gun, Useless, Insight and Home at the same concert made us think “this is the Ultra tour we never got in 1997!”


The audience was great too, with much younger fans than in London and most other places we’ve seen DM. And again: very well-behaved!

The only thing to complain about was the horrible expensive Russian 3G/4G prices for my Norwegian mobile subscription, so no real time streaming or SoMe posting during the concert. :/

Feb 17th: A day of sightseeing and *drinking* ;) Well, not that much, but slightly in a Russian style. After seeing the Winter Palace/Hermitage, walking around the “Admiralty” district, we ended up at a well planned destination a block from our hotel; the Museum of Russian Vodka. Was planning to dine there too, but some heavily decorated military oldies and their wives occupied the restaurant, probably sending someone off to retirement. We did get the tour of the museum and some sampling afterwards – highly recommended!

After dinner we met up with Michael Draw, the singer of the Russian dark wave act Otto Dix, and his girl friend, and spent the rest of the night talking about talking about music, Russian culture and mentality, languages and linguistics, more music, Rammstein, food, ballet, MMA, and showing him his music on Spotify – a real surprise for Michael!

Feb 18th: Going home again, with a wish to return to a St. Petersburg without snow or ice!

PS! Do also check out my other writings @ http://www.side-line.com/?s=stange – mostly Norwegian & friends releated, but lot’s of DM fans like some of these artists too

Regards and “see you next time!” from
Jan Ronald Stange
Nøtterøy
Norway