A QUESTION OF TIME

A Question Of Time was released on 11 August 1986, five days before the end of the Black Celebration Tour. Normally, any such release isn't that important. The album has sold all it will really sell, the band are winding down from a spell on the road and, unless the b-sides and remixes are worth it (as they were here), some fans might not even buy the single. The thing is though, A Question Of Time was a pivotal single for Depeche Mode, but not for the musical side of it. It was important because of its video.

The video for the single was directed by Anton Corbijn who agreed to work with Depeche Mode primarily because they were in America at that moment in time (see Black Celebration re-issue dvd interviews). Until that point, their videos had been pretty crap in the main, with the band and the video directors never quite grasping how to make videos to match the mood of the music. Their videos up to Anton's involvement suffer partly from too much literal interpretation of elements of the songs (see Master &Servant's drills and chains), partly from too many attempts to show that they hit real things rather than press buttons (see Stripped's metal bashing) but mainly from being useless (everything other than Shake The Disease and Stripped). Anton's approach seemed to be along the lines of "I'm making a film and your music just happens to be the soundtrack" and it worked, and still works. Think of Depeche Mode now and most people will think Violator and its iconic, Corbijn artwork. Ask someone to think of a Depeche video and they'll likely think of Enjoy The Silence. Anton's artwork was also crucial to Depeche Mode from the Music For The Masses period and beyond. Basically all of his single and album designs are wonderful, bar Home which really was lazy.

Without his involvement in the A Question Of Time video, it's likely that we would have a very different Depeche Mode to the one we have today. Yes, Martin would still have come up with the majestic songs, but the band's image would have been different.  The single was, therefore, very important, even crucial, in seeing Depeche Mode taken more seriously and not just viewed as synthpoppers. Put it this way, if it had been another Get The Balance Right milkmen/fairground horrorshow, I doubt we'd have been talking about Dodgers Stadium four years later. I guess I'd better show you the video:

So - to the single itself:


They also helpfully provided the lyrics with a picture of Dave looking, or at least attempting to look, very rockstar in their 30th August edition: 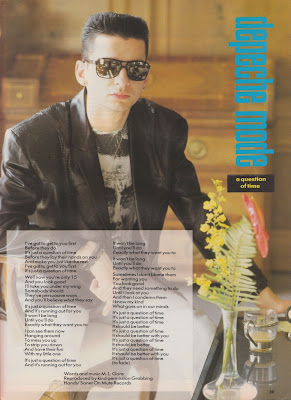 An advert for the standard versions of the single appeared in the same magazine on 16 August: 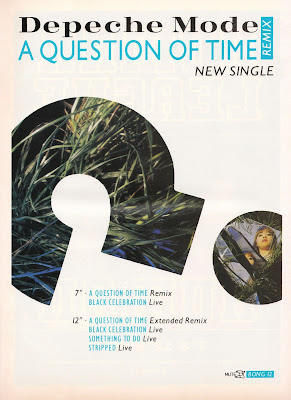 The band promoted it with a number of television appearances . Here's one, with a brief Dave interview, from U.K. show Music Box:


The 7" version of the single featured a remixed version of A Question Of Time called A Question Of Time (Remix). It's quite a nice version and is slightly faster than the album mix. The b-side is a live version of Black Celebration recorded live at Birmingham N.E.C. on 10 April. The 12" contains one remix and three live tracks from that Birmingham show. The remix is Extended Remix of A Question Of Time by Phil Harding and it's pretty good. Like any good extended remix, it reshapes the song and let's you hear many of the individual components which is always cool. The live tracks are Black Celebration, Something To Do and Stripped.  As I've mentioned previously, the live versions of the Black Celebration tracks seem to lack something. Something To Do sounds great though, and seems to have a life that the other tracks lack.


For this first time in this campaign there was a limited edition 12" single (middle above). Side A of the record is an odd one. There's the New Town remix of A Question Of Time by Rico Conning to kick it off. It's not bad, but it's not as good as the Extended Remix, despite turning Martin into a Dalek towards the end. A novel touch. It then runs straight into a live version of A Question Of Time, again from Birmingham, which sees the band use a really odd sound for the main keyboard riff. The B-side firstly features the Black Tulip Mix of Black Celebration, again by Mr Conning, and it's a fairly weird but ultimately enjoyable remix. The last track is another live track from Birmingham, More Than A Party, which, as it did with all shows on the tour, rounds the record off nicely. All tracks were made available on cd on 1991 following the cd re-issues. The label on the 12" A-Side is a lovely thing if, like me, you like that sort of thing:

Once again, the West German fans got some coloured vinyl. The 7" was released on red vinyl (note - all singles from See You to Never Let Me Down Again are available on this format), the standard 12" appeared on black and white marbled vinyl and the L12 appeared on grey vinyl. All three coloured vinyl versions can be viewed above. A West German cd single is also available. There's a lovely French cd single available too which features the 12" tracks plus A Question Of Time (Remix)  from the 7". It's available in a few guises, the most sought after being the numbered version in a cardboard sleeve - picture below. I've only just received this, hence why it doesn't feature in the collection post above,  There's also a French cassette version featuring the same five tracks. 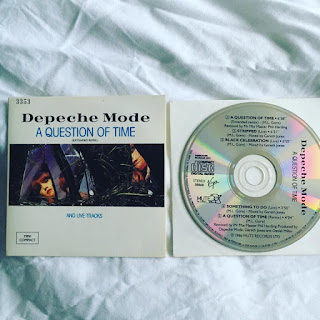 The final release to note is the American "Specially Priced Maxi Single" which is a hybrid A Question Of Time/A Question Of Lust release. The front sleeve looks like this: 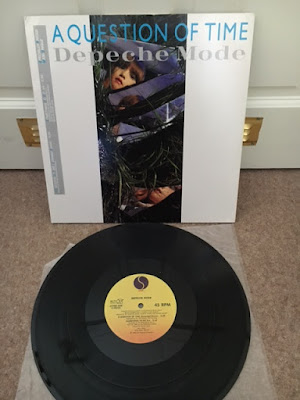 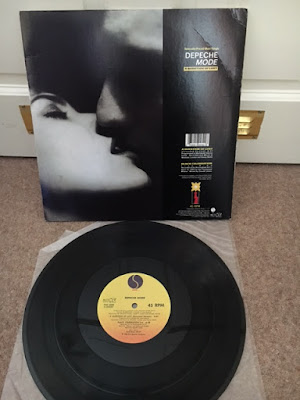