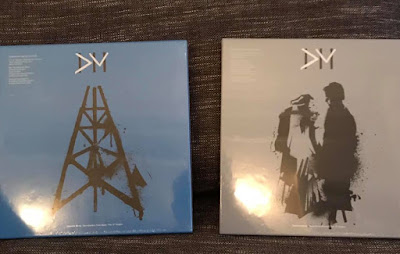 The release of Depeche Mode's first two 12" single boxsets (review here) was greeted with a mixture of delight and complaints as with every Depeche release these days it seems. Many people felt that they were too expensive especially when they would be paying for things they already had, which is a perfectly understandable view to take. There's no getting away from the fact that they are expensive and as the series continues the prices will only go up. When we get to the Violator boxset for example, we're looking at at least nine 12" singles. If you've been a collector since the early days then, you'll have all these records already. However, if you're new to Depeche Mode collecting, these boxes are a great way of starting things off.

Again using Violator as an example, a look at Discogs this morning shows me that the cost of buying the full set of 12" singles released in 1990 in mint condition (as the 12" singles in the boxset are) is £273 plus postage. I presume, indeed I desperately hope, that the Violator boxset will cost less than that - I'm sure you'll remind me if it doesn't.

Anyway, my point is that, while costly, these boxsets are a great way to get a hold of mint condition Depeche Mode 12" singles for less than you'd pay on Discogs etc. They're a good thing as far as I'm concerned. There are of course people like me who already have the 12" singles AND buy the boxsets but we're beyond help.

Right - enough rambling. What about the boxsets themselves? 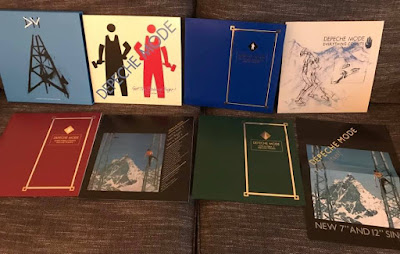 Look at those beauties. The Construction Time Again era contains some of the band's most iconic cover art with the album and Love In Itself covers superbly photographed by Brian Griffin. The attention to detail throughout that era's releases is superb. From the worker icons on both Get The Balance Right singles (which may have slightly influenced this blog's logo) which fit the theme of the at that point unreleased album perfectly, to the matching designs of the three limited edition 12" singles, everything the band released in 1983 had a marvellous symmetry to it, each released tied to the themes of the album itself.

The 12" singles in the boxset are of course faithful reproductions of the originals. For people who get excited about that sort of thing, and I of course am one of those, the covers of the limited edition 12" singles have the same texture as the original releases. The labels on the records are also identical to those on the original releases and again, that is a very good thing. That sort of attention to detail is what makes these boxsets worthwhile. As ever, thanks to Daniel Barassi for all his work here.

The contents of each 12" are well known to everyone by now so I won't go through them all. If for some reason you have never heard Get The Balance Right (Combination Mix) or Everything Counts (In Larger Amounts) then you really need to remedy that. They are two of the band's great self produced remixes. The limited edition 12" singles are all worth hearing too as each one contains four live tracks from the band's show at London's Hammersmith Odeon on 25 October 1982. The A Broken Frame era was an interesting one for the band given that they had to deal with Vince's departure. These live tracks show that they were trying to strike a balance or even trying to get the balance right (sorry) between pop (A Photograph Of You, The Meaning Of Love) and the more experimental side of things that the album had already hinted at (see My Secret Garden and its Oberkorn intro). These three records are the only officially released A Broken Frame era live recordings and that makes them worth having.

The peerless DM Live Wiki has more tracks from that show available for streaming by the way. To further prove my point about the band's more experimental side coming to the fore, check out The Sun And The Rainfall from that show with its pre Construction Time Again metal bashing noises. You can listen to it here.

This release also contains Alan Wilder's first Depeche Mode songwriting credits. He and Martin co-wrote the frankly awful The Great Outdoors and the "ok lads we get it - it's all about work and metal and all that" decent b-side Work Hard and Alan penned the rather good Fools all by himself. The Great Outdoors  is probably the band's most terrifying track, sounding like the music you would hear as you are murdered by an enraged gnome with the hammer shown on the album's cover.

Finally, the boxset comes with a reproduction Love In Itself promo poster and the box itself shows the oil derrick from the Love In Itself limited edition 12", recreated for this release. There's a download card to allow you to enjoy all these digitally too. One thing that Sony want to change for future releases is the tagging of these songs on all boxsets when downloaded and put into ITunes. When downloaded, the individual track names are all garbled and therefore almost entirely  useless e.g. "ConstructionTimeAgain12"boxset_EverythingCountsA1InLargerAmounts" etc. It's not the biggest problem in the world, but entering the names individually is a pain in the arse.

By the way, if you bought all these 12" singles in mint condition on Discogs today, you'd pay £117 plus postage. That's more expensive than the boxset,

As with the previous boxsets, there was an unboxing video and here it is:

Some Great Reward The 12" Singles Boxset 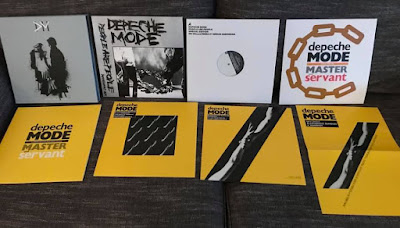 The Some Great Reward boxset unsurprisingly contains all the 12" singles from the era plus a new 12" in the shape of L12BONG7 which is the 12" version of the original 7" ep featuring Somebody (Remix), Everything Counts (Live), Blasphemous Rumours (Single Version) and Told You So (Live). I'm really pleased with that as it means the release is a complete record of the era. It'll be interesting to see what happens with GBONG17 when the Violator boxset comes around.

The artwork for this era isn't as impressive as Construction Time Again, the album cover art aside. It's a lot starker and, while the Master And Servant 12" cover is marvellous, the rest are a little bland. I'm not sure how well known this is or not, but on the People Are People cover, the arm on the right hand side belongs to Hugh Grant the entirely one dimensional English actor. There's a fact to entertain your loved ones with.

One of the best things about this boxset for me is the digital download element, track name nonsense notwithstanding. Unless I'm very much mistaken (awaits "OMG YOU KNOW NOTHING ABOUT DEPECHE MODE MAN" attack from the Black Swarm), this release sees the first official digital versions of People Are People (On U-Sound Remix by Adrian Sherwood), Are People People? and Master And Servant (An On-U Sound Science Fiction Dance Hall Classic Re-Remixed by Adrian Sherwood) and that is very much a good thing. I love these remixes and the fact I can now sing along to Are People People's Zing Zing Zings and Boom Bop Bops on the train is great for me and terrifying for my fellow passengers.

For completeness' sake, I should point out that Alan (no he's not coming back) has another song here, the superb In Your Memory, the b-side to People Are People. It's far better than Martin's (Set Me Free) Remotivate Me which lets the Master And Servant  release down rather dramatically. The 12" versions of People Are People and Master And Servant - Different Mix and Slavery Whip Mix - are both towering gorgeous beasts of remixes and should be on everyone's playlists. The live tracks on the Blasphemous Rumours releases are from the band's show at the Empire Theatre in Liverpool on 29 September 1984.

As an aside, the huge pulsating Depeche Mode brain that is Michael Rose pointed out on depmod's Facebook page a thing that will annoy people like him (and me) for the rest of time. It takes a certain type of person to get annoyed by this sort of thing, but as I mentioned earlier, we are beyond help. Look at the alignment of the spines in the boxset:

WHAT IS L12BONG5 DOING THERE? GET BACK IN LINE.

Finally, there was another unboxing video and this time it features, among others,  the silky sounds of Sean Salo. Here it is:

And what would this cost you if you bought the records all in mint condition on Discogs? £148 plus postage is the answer which seems high to me but there you go. If anyone is remotely interested by this point, I included the 7" ep in that.