2021 will see the 40th anniversary of Depeche Mode's first single Dreaming Of Me. To celebrate 40 years of Depeche Mode, I will be writing a blog about each of their singles looking at the song itself, b-sides, the various formats they were each released on and so on. I'll mainly focus on UK releases but I'll mention releases from elsewhere where they are noteworthy. As ever, the opinions no matter how ridiculous they may seem are all mine, this has nothing to do with the band or Mute and any mistakes you find are entirely my own.
As this series develops there will be a few special blogs here and there and possibly a podcast or two if the people I've spoken to and I ever get round to that. There is no guarantee that they will ever happen however so don't delete your podcasts apps in fear of them actually happening.
Thanks in advance in case I forget to depechemode.com, Depeche Mode Classic Photos & Videos Facebook group, dmlivewiki and depmod.com. Without the latter three sites' valuable resources, these blogs would be very brief. Without depechemode.com and indeed Depeche Mode themselves, this wouldn't be happening at all. All photos are mine unless otherwise credited
Over the next few months, feel free to join in the post blog apologies (me) and chat (hopefully you) on Facebook ,my Twitter page and the blog's Twitter page. I hope you enjoy whatever this turns out to be.
DANCING WITH A DISTANT FRIEND - DREAMING OF ME
The Single
Dreaming of Me was released on 20th February 1981 and first charted in the UK on 4th April, entering the charts at number 75. It climbed to its chart high of 57 the following week before dropping to 64, climbing back to 63 and then dropping out of the charts altogether.
In those days, a band had to sell a large amount of singles to even get to the top 40. When Dreaming Of Me was released for example, the UK number one was the horrendous and probably offensive in numerous ways Shaddap Your Face by Joe Dolce. That single sold six million copies worldwide which is a damning indictment on 1981 society. Against that admittedly extreme background, Depeche Mode did very well indeed in getting their debut single to number 57.
The single received a reasonable amount of airplay from Radio 1 (crucial in those days) and was generally well received by the UK music critics too. Smash Hits reviewed a Depeche gig at Cabaret Futura on 16 February (see dmlivewiki for gig info here) in its 5th March 1981 edition, calling Dreaming Of Me "simply wonderful" and adding "(T)asteful and tuneful, danceable and intelligent, it deserves to be utterly huge. Buy it!" 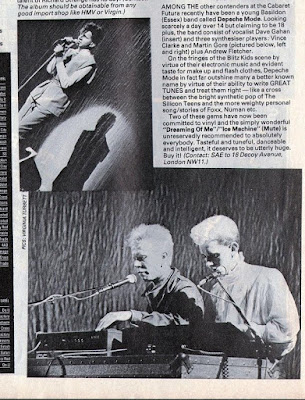 Sounds said that the song was "Deep, meaningful, heavy and arty" and the NME called it a "sweetly unassuming slice of electronic whimsy" with "a candyfloss melody" that made for "a pleasant three minutes." Record Mirror were sort of complimentary in saying "Floppy fringe nusic, as predictable and well crafted as any Ultravox song."
Smash Hits printed the lyrics too: 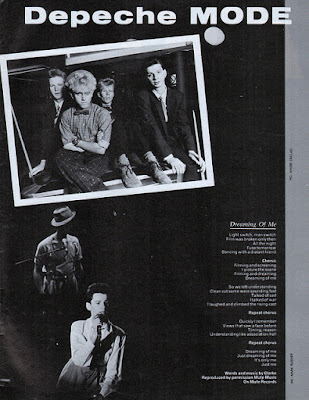 Dreaming Of Me really is a great introduction to Depeche Mode. It has all the hallmarks of classic Vince Clarke penned synthpop, with its lead riff giving a nod to OMD, one of Vince's early influences. It's a pure pop song and easily the equal of many of the more famous and, let's be honest, inferior tracks of the time. The band stuck with it for a few years and included it in their live sets until April 1983. In total, the band played the song live a numerically frustrating ninety nine times with the lucky attendees at Bangkok's Napalai Hall the last people to see the band play the song live on 10th April 1983. We're not going to count any of Martin's Hotel Session bootlegs before anyone asks.
Dreaming Of Me doesn't appear on the UK edition of Speak & Spell. The CD version issued in 1988 adds the track to the album. It's a pity it didn't feature on the original release as it would have worked well perhaps at the expense of one of the weaker tracks but conversely, it is quite special to have it as a standalone single. It did feature on the US release (among others), a move that saw Puppets promoted to track 2 and I Sometimes Wish I Was Dead harshly binned. What's Your Name stayed silent in the corner of Side A relieved that no-one had noticed it. For completeness' sake, the US vinyl version features the Remix version of New Life and the Schizo Mix of Just Can't Get Enough instead of the two album versions we know. I'm not writing about the album though and it's no spoiler to say that those two songs will feature prominently in the next two blogs, so I'll leave this for now.
The b-side of Dreaming Of Me is something rather special. Ice Machine is a dark, brooding track that tips the hat firmly to Kraftwerk albeit through a gloomy Basildon filter rather than a euphoric Europe Endless style one. Ice Machine is certainly more representative of the way Depeche Mode's sound would develop over the years after its release and it's a song that has certainly stood the test of time. Neither of the two tracks here featured on Speak And Spell and while Dreaming Of Me would have slotted in nicely on the album, Ice Machine would perhaps have stuck out as being too dark and almost industrial at least when compared to the likes of What's Your Name.  There is something wonderful about such a strong song being a b-side, only accessible to those who bought the single. A 7inch single needs to be, or at least should be, a perfect package and the two tracks here more than pass the test.
Ice Machine featured on the band's original demo tape with Fletch playing bass guitar on the track. The song has sadly not been heard live for years, but it was played 132 times by the band, all the way from the Composition Of Sound gig at Nicholas Comprehensive School on 14th June 1980 to the concert at Nakano Sun Plaza in Tokyo in 12th April 1985. A live version from the gig at Liverpool's Empire Theatre on 29 September 1984 is available on the Blasphemous Rumours 12”. 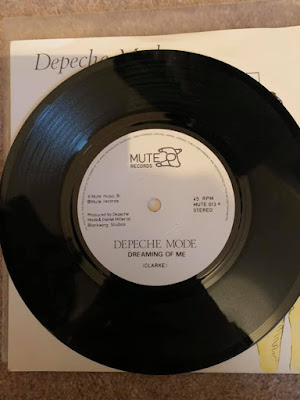 The Formats
As this series moves on, this part will get harder. Happily, Dreaming Of Me was only released on 7" in the UK so this should be easy.
The sleeve was designed by Michael Crick, a Basildon school friend, and the front and back of it can be seen earlier in this blog. The 7" labels are plain enough designs; the A-Side is above and here is the B-Side 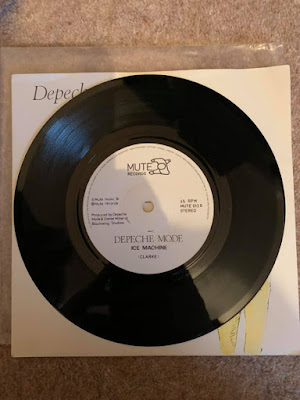 If you are one of those people who needs to collect everything by the band, there are six variations of the UK 7" alone some with different style openings to the sleeve, some with slightly different colourings on the shirt of the person on the sleeve and so on. There is also a version with a Ferret Plugging Sticker on the back. Ferret, later Ferret & Spanner, was the plugging company Mute used to promoting Depeche and other artists records. You will have seen Neil Ferris on the documentaries that accompanied the CD/DVD reissues. Depeche Mode promos are pricey as it is - a Ferret & Spanner sticker adds a few pounds to their value or, in my and may other people's case, the money you inevitably spend on it for reasons best known to yourself.
The single was released on CD in the UK in 1991 as part of DMBX1 and then on 12" for the first time ever with 2018's Speak And Spell 12" Boxset. I was one of the people involved in the unboxing of that box - the video and my review of it can be found here - cringe
Elsewhere on earth, the single appeared on 7" in Germany, Australia, New Zealand and Canada (promo only). A lovely 3" CD single was released on Germany in 1988:
There are a few other versions of Dreaming Of Me out there and, as ever, do check out depmod.com to view them all. As a random pick from those, here is the French CD single:

There we have it then - Depeche Mode's first single. Only Vince knows what a "man switch" is and perhaps that knowledge allowed him to climb "the rising cast," laughing as he did so. One thing we all know however is that Dreaming Of Me and Ice Machine were quite marvellous introductions to a career that would become something very special indeed.
That career has been filled with 56 singles and the second of those (leaving me with only 54 blogs to go....) would be New Life. We'll have a look at that next time 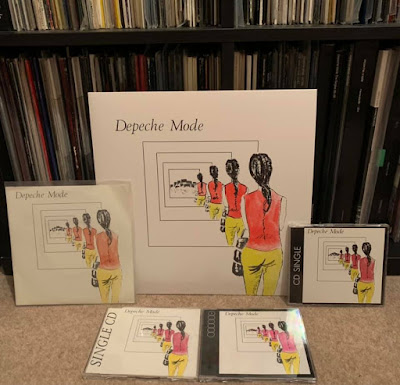