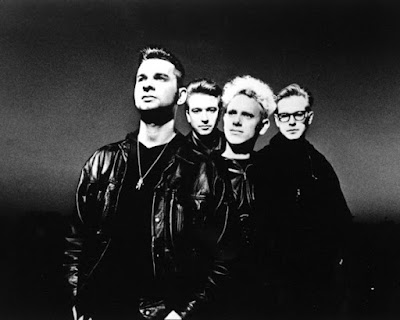 Once again I find myself knee deep in a blog related problem of my own making and, looking for help, I once again turn to Panos Sialakas, a man who has devoted more time to this blog than is reasonably necessary. Part editor, part guru and, as I am sure he would happily admit, my biggest fan, Panos knows more about Depeche Mode than Depeche Mode themselves. As many of you who've met him know, he's also an all round superb chap. Follow him on Twitter (@panos101) and keep an eye on his superb blog PopMart 2.0. In this great guest blog, Panos tells us about the impavt Violator had on him. Thanks very much as ever Panos.

Violator In My Eyes

I have said and written so many things about Violator that when David (sadly McElroy, Gahan) asked me to be part of Violator's 30th anniversary month, I decided to go back in time and remember what the impact of Violator was on me when it was released in March of 1990.

It's not an easy task though. I mean, the process of going back 30 whole years can be both nostalgic and painful, especially when I have to remember the very different conditions in the Greek society and the surrounding technology, but also (and mainly) the fragile period of being a oversensitive teenager in the late 80s/early 90s.

Under those circumstances, I fell in love with Depeche Mode in the spring of 1989. It was the time when the media scene in Greece was changing rapidly with the landing of private and satellite stations, including MTV. And Depeche Mode, as part of a major scene that was happening back then, was one of the bands that I had started to like a lot. There was a certain sense of freedom about their music and a much cooler sense of style than most of the other acts of the time.

And then in late summer of 1989, Personal Jesus came and stunned me! Here's the latest Depeche Mode record... but not like the Depeche Mode we already knew. For a 15 year old kid like me, it was something totally new, like I had discovered a new language. I wouldn't stop listening to the song but most importantly, watching that spaghetti western video of those four cool guys (even Fletch on the rocking horse) over and over again.

One thing I had noticed on MTV was the lack of album being mentioned in the credits. Back then, I couldn't get hold of all the information I have today, and the fact that Personal Jesus had been released less than 6 months after 101 made me think that it was just a standalone single. The rest of the year, and the 80s, was passing by with our attention focused on the massive changes in Eastern Europe. The world was changing.

It was changing for me in relation to Depeche Mode too. Early 1990 and MTV advertised an exclusive screening premiere of DM's latest single called, Enjoy The Silence. It was Monday morning and I was able to ditch a couple of school hours (sorry mom and dad) in order to watch it. About 4 minutes after that first viewing, I found myself in tears. That was beautiful. I had found my favorite band.

And I wasn't alone. Like other places of the world, it was that time when Depeche Mode were getting a major force in Greece too. They had built a strong reputation with their one hour performance back in July of 1985 at the infamous Rock In Athens festival and by the time of Violator they had developed a cult following here as well, including the formation of the fan club called Hysterika.

Personal Jesus and Enjoy The Silence were played repeatedly in Greek radio; and in addition to MTV there were other satellite TV stations at the time - like Super Channel, Sky and RTL - playing the iconic Anton Corbijn videos as well. Depeche Mode were going big everywhere and my little country was no exception

As for me, I never looked back after that. Depeche Mode is still my big love. I remember those days very fondly because of them and believe me, that's not a minor deal for me at all. They were troubled and confusing times and Violator in particular was one of the major things I had in order to find the power to deal with the world.