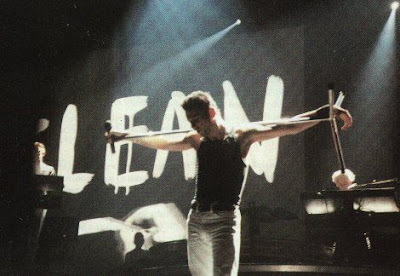 There is universal agreement among Depeche Mode fans about the World Violation tour. Those who saw it will say that it was unforgettable and a must see Depeche gig; those who didn't see it will say that they wish they had done so. What did the press think of it though? And how many times did the British music press mention Just Can't Get Enough? Read on.

The NME's reporter liked the Wembley Arena show but not Violator itself. He called the gig "(S)lick as hell, honed to perfection playing baseball stadiums that dwarf Wembley Arena," going on to note that "Here was total production, a show, as opposed to four sweaty oiks playing synthesizers." He then complimented the films that played behind the band and called Dave "(A)s close to a seasoned superstar as a Basildon boy gets."  Unfortunately, he then goes on to say that the actual music "(P)assed by virtually unnoticed," before adding that Personal Jesus was in his view "a mediocre single in anyone's book."  He liked the lights and films basically.


The London Evening Standard's review of the same gig was much more positive. It said:

"Their concert at Wembley Arena was much more akin to an evangelical meeting, such was the devotion of the saluting crowd."

I think we all know what that feels like. The reviewer, Spencer Bright, loved the show, concluding:

"(Dave's) bass voice monotonously whipped up the frenzy from oldies like Everything Counts through to the current first-rate Violator album, climaxing at the end of the main set with a mesmerising Your Personal Jesus (sic)...Unlike all their peers in that distant New Romantic movement of the early Eighties, Depeche Mode astonishingly seem as if they are yet to peak."

"Here is a band who have stayed the course, survived the swerves and lane-changes of musical fashion, and basically kept, if not ahead of the times, at least in step with them like no other band of their era...Depeche take their mile-high stack of jukebox standards, polish them up, warp them in glistening Acid-metallic armature, slip a gleaming steel post-House chassis underneath when no-one's looking and turn them into monuments to new Sonic architecture."

A good review in other words but all very Melody Maker-y at the same time.

The Guardian seemed to enjoy the show, saying "The final section of the show was akin to a celebration, if Clean or the lugubrious Never Let Me Down Again could be thus described. Personal Jesus certainly could, as Gore thrashed at his guitar to bring the Mode as close as they have come to Status Quo; busty cowgirls adorned the back-projection as the Mode swaggered moodily by in cowboy hats."

To try and work out why Depeche Mode were so big, Select Magazine headed to Germany to take in a gig or two. The reporter noticed that all 17,000 fans in Dortmund's Westfalenhalle were "feverish" with "Depeche Mode's spartan bedroom electronics and bass imperatives (stretching) out to fill the place, subdue it and make it theirs."  He goes to add "These days, they're totems of teenage sexual neurosis in Ray-Bans, corrupters of international youth, and the only people to sell the vaunted sonic metal disco sound of the mid-80's and still retain their credibility." 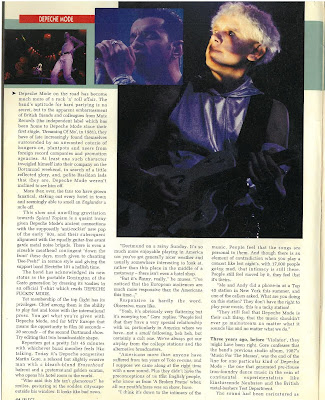 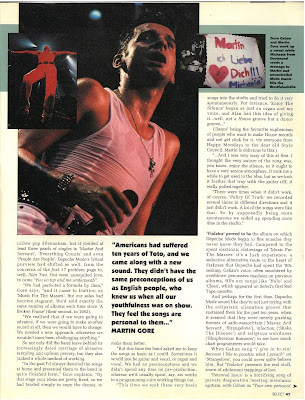 I've included all four pages of the Select article as it's an interesting read all round, showing the UK press getting to grips with Depeche Mode being something very big indeed. It ends on a note I think we can all agree on:

"But, believe it or not, World Violation is, first and foremost, a rock 'n' roll show on a panoramic scale. Perhaps it's just the volume, or the shock of finding such solitary in a context of size and excess, but in 1990, Depeche Mode win by simple power. It's not simply stunning - at times it's frightening.

Personal Jesus is a case in point. On record it snarls and spits, the perfect antithesis to the redundant pretty-boy image of Depeche Mode that still lingers in British minds.