WORLD IN MY EYES - THE REVIEWS 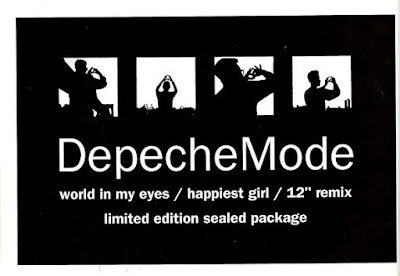 As I mentioned in yesterday's blog, getting interest in the fourth single from an album isn't easy. To prove that, World In My Eyes didn't attract too many reviews. It's shame given the quality of the three songs on the release.

The NME review was predictably, well, hard to grasp first time round. It seems to praise them but can't help but mention Just Can't Get Enough. Some of the language used is a little off colour too, even by the standards of 1990.


The review in Smash Hits was a positive one. The guest reviewer that week was MC Tunes, a man very few of you will remember. He was from Manchester so that was almost enough on its own in 1990. That said, I did buy the cassette single of the song he released with 808 State called The Only Rhyme That Bites, but I was young. Anyway, Mr Tunes us highly complimentary called World In My Eyes "a bloody good dance tune" before going on to say that Dave sounds like Pavarotti compared to Shaun Ryder which isn't hard to argue against. Good stuff.

World In My Eyes didn't get too many more reviews, but when the album reviews came out six months earlier, it was greeted positively. Record Mirror (above) for example called it "the perfection introduction to this compromise between pop music and something a little more sinister."  Melody Maker meanwhile talked about how the song featuring "Andy Fletcher's two fingered keyboard motifs" gave it an "instantly recognisable DM stamp," whereas Sounds said the song "signalled optimism."  Q magazine referred to it as "a relatively straightforward love song" which seems a tad harsh. 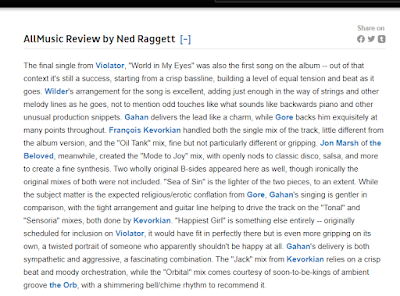 People eventually catch up however and Violator now rightly revered as a classic album. Music journalist Ned Ragget has been a long time Depeche fan and his review on the AllMusic blog is a lot more positive, focussing on a review of the many tracks available across the whole single package. I don't disagree with anything he says there. Billboard, in a Violator retrospective, say:

"The album begins with Gahan playing horndog travel agent, inviting a lover to follow him someplace where pleasure reigns supreme and everything else ceases to exist. Helping him seal the deal are two synth hooks (one blippy and industrial, the other urgent and needling), a driving beat, and his own persuasive vocals. Hedonism like this practically sells itself."

"Described as one of Depeche Mode’s sexiest songs, World In My Eyes much sums up the mood of the band at the point of recording Violator – all were involved and in perfect unity. It originated from a Gore demo, as most Mode songs do, of course, but its evolution in the studio was a dramatic one. Not only that, but all the band contributed vocals to it – a rare occurrence but perhaps one that signified the unity and friendship that ran through the Depeche Mode camp at the time."

And that was that as far as World In My Eyes reviews went. Positive overall at the time, but as with most things Violator related, its reputation has grown with each year. We knew how good it was all along though didn't we?