As I mentioned yesterday, Policy Of Truth is not the most popular Violator song and is, I feel, rather unfairly overlooked when the album's three other singles are mentioned. What do the fanbase know though? The only true measure of a song's worth is the opinion of the British music press. Right? Oh.

Ah, Melody Maker, May 1990. . It's hard to know where to begin here.  OK, Policy Of Truth may not be everyone's cup of tea, but words like "ineffectual" and "lardy" are somewhat over the top. The decision to call Francois Kervorkian a tosser is also baffling to say the least. The remarkable thing is that, in its review of Violator, the same publication had called Policy Of Truth "one of five potential singles" that was "based around a sadistic, cynical electro-riff," adding that it "oozes with genuine danger."

No doubt imagining that a music press besotted with The KLF would embrace a beautiful gatefold 12" where Depeche Mode were remixed by that band, Mute sent copies to the British music press in the naive hope of glorious wall-to-wall praise. That didn't work did it? It was deemed "f***ing boring" in the NME. Marvellous.

The review above wqs marginally more polite but seemed more enamoured with the sleeve than the song itself. Away from the UK, The Boston Globe in its Violator review of 19th March said that Policy Of Truth was:

"(O)ne of the album's better songs...thanks to an alluring synth line tipped by a sliding bass note - a tiny infectious hook courtesy of Gore's treated guitar."

Quite specific but ultimately positive.

Once again Smash Hits failed to review the single but it did publish its lyrics in its 2nd May 1990: 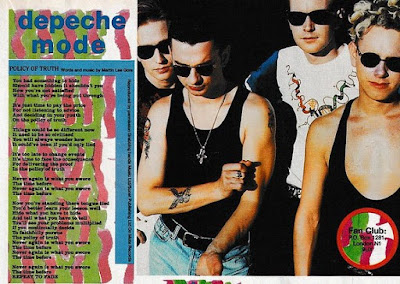 Proving that Depeche continued to be viewed as a pop band in Britan, the 13th of June edition of the magazine even included a Depeche Mode poster. The posters given away in the same edition were of Janet Jackson, The Stone Roses and, you guessed it, Big Fun and Sonia. As we can see below, Dave had clearly just been told that as Anton took his picture. 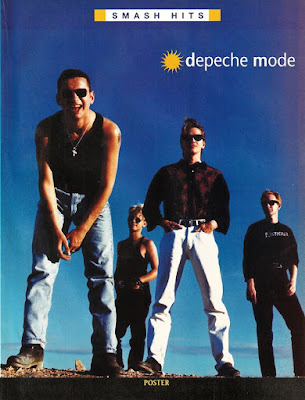 The hardest task Policy Of Truth faced was offering something new two months after Violator was unleashed on the world. The remix by The KLF aside, there was nothing particularly for the music press to grab onto and Policy Of Truth received a much harsher reception as a single than it did when taken as part of the album as a whole.

As Depeche embarked upon the World Violation tuour, I'm confident such negativity was the furthest thing from their minds.