ENJOY THE SILENCE - THE REVIEWS 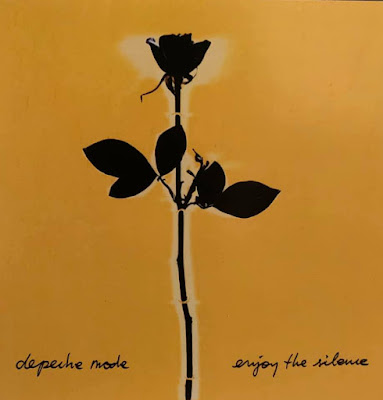 Enjoy The Silence was Depeche Mode's most successful single in Britain since Master & Servant in 1984. Even thought Shake The Disease should have been number 1 for around 2 years, Master & Servant's number 9 placing was as high as Depeche got in the charts for six years with the band seemingly unloved by the media and pop fans in general. The public loved Enjoy The Silence however, and it beat Master & Servant in reaching number 6 where it stayed for two weeks.  It also managed to please the notoriously Depeche phobic music media.

Firstly, on 3rd February 1990, the NME made Enjoy The Silence its Single Of The Week.  The reviewer was joined by Steve Waddington and Jon Marsh of the temporarily and somewhat remarkably successful band The Beloved. Marsh, who would soon go on to remix World In My Eyes, saying that he thought it was Depeche Mode's "(b)est for a very long time."  The NME reviewer called it a "brooding, tender piece" though wrong mentioned it was the "first cut from their forthcoming album" which is rather unfair to Personal Jesus.

The review above was another typical of the UK music media at the time. It's a lot of nonsense that seems to grudgingly agree that the song is "Understated and, golly gosh, utterly pleasant." Describing a song in those terms was essentially high praise for Depeche Mode at that point in their career. 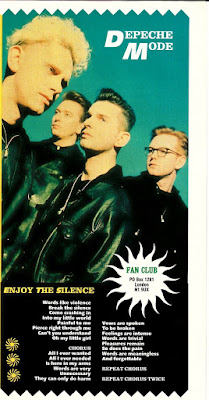 As it had done with Personal Jesus, Smash Hits featured the lyrics but no review, with the picture above featuring in its 21st February issue.

The general positivity about the song coupled with its unmatchable genius meant that it enetered the charts at number 17. It then moved to its peak of number 6 where it stayed for 2 weeks before falling to numbers 12, 20, 32, 52 and finally 62. Impressively, the song reached number 8 in the US and number 1 in Denmark and Spain. Overall, it was Depeche Mode's best global chart performance for a long time.

The single even led to Depeche Mode receiving their first and, thus far, only Brit Award. After some, erm, gentle encouragement in an issue of BONG (below) the band won the best single of 1990.

The awards ceremony took place on 10th February 1991, long after the band were finished the World Violation Tour. Depeche didn't turn up so British DJ Simon Mayo accepted the award on their behalf in a very, very odd way:

Positive reviews were a relatively new thing for Depeche Mode and Enjoy The Silence had gone down well all over. If the band thought this new wave of positivity was impressive, the reviews of Violator that shortly followed took the notion of actually praising Depeche Mode to a new level indeed as we shall see later on this month.