The last time I embarked upon a month long album special. Sean Salo provided one of that month's highlights with his incredible blog about Depeche's show at Radio City Music Hall in 1986. With that in mind, and no doubt testing the limits of our friendship, I asked him if he could write something again. He came up with this article about the World Violation tour gig at Giants Stadium and it is incredible. I'm lucky in that I got to read it a few days ago and it made me feel like I was at the gig. Superb. You'll love this. Thank you Sean for the blog AND for backing up my point that U2 ripped off World Violation for ZOOTV.

As I write this, we are living amidst the coronavirus pandemic where self-isolation is the reality for much of the world. It paints a communal event with tens of thousands of ecstatic people with rose-colored hues (pun intended). We are Depeche Mode fans -- we’ve been training for doom, gloom, and isolation our whole adolescent and adult lives! This crisis also makes me thankful for events like these upon which we can look back fondly and to which look forward after we have overcome what is hopefully a blip on our collective radars.

The price to cross the George Washington Bridge from New Jersey into New York City was $3, and the toll booths caused miles of traffic during normal rush hours. Even at midnight, crawling in 45 minutes of traffic to pay the bridge troll was not unexpected. But on that warm June night in 1990, you could hear Depeche Mode bumping from the radio or tapedecks all over the New Jersey Turnpike. From a few lanes of traffic over came a yell, “Sean! Yo, Sean! I knew I’d see someone else I knew here.” It was a frat kid from my university; Chad?... Brad? (Before 1990, Depeche Mode had largely been a cult sensation in the States. But that summer, you couldn’t throw a rock into a frat house or at a line of cheerleaders without hitting someone who owned a copy of Violator.) With nearly 80,000 other concert-goers all making their exodus from Depeche Mode’s World Violation Tour show at the old Giants Stadium back toward New York City, it was indeed a near certainty.

Earlier in the day, we arrived at the stadium later than I’d hoped. Admittedly, I underestimated the time it would take to get there. That didn’t stop me from blaming everyone else in my crew who I had agreed to drive there. We parked what felt like miles away, and as we made our way toward the entry gate, I could hear the opening percussion of Nitzer Ebb’s Fun to Be Had echoing through the parking lot. I panicked and started to run, not wanting to miss a second more than I needed to, and my girlfriend at the time refused to join my trot, choosing to walk instead. (I’m not saying this was the reason we broke up, but it weighed heavily...) 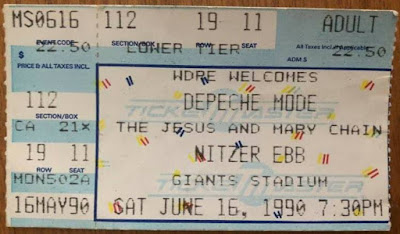 I finally arrived at my seat on the floor of the stadium for the Ebb’s third song of the set, Join in the Chant, just in time to see half of the crowd who’d been sitting or milling about feign fandom and jump to their feet for the song they knew from any of the dozens of dance clubs catering to synthpop, post-punk, and industrial music at the turn of the decade.

It was still bright as day when The Jesus and Mary Chain sauntered on stage with their set of fuzzy, feedback-laden noise. One might think this might be why they were gazing at their shoes throughout their set, but they were just staying true to form. For the first half of 1990, they’d been playing largely in clubs and medium-sized venues, so the bright sun and open-air stadium was an atypical setting for them. While JAMC certainly had the catalog and the name recognition, there was a noticeable drop in stage and crowd energy from NEP’s set just prior, even as the stadium continued to fill.

Many of us take for granted the experience of seeing Depeche in a stadium setting now, but in 1990 North America, Depeche Mode had yet to host audiences that large east the Los Angeles Basin. Giants Stadium, home to American football’s New York Giants and New York Jets, hadn’t hosted many concerts up to that point, save for some stadium rock giants like Aerosmith, U2, and the hometown Jersey boy, Bruce Springsteen. As a sign of the changing musical tastes of American young people, the last concert held before DM’s World Violation Tour stop there was a bit of a stunner, as well, with Love and Rockets, Pixies, and Shellyan Orphan providing support for DM’s contemporary, The Cure, on the 1989 Prayer Tour for their masterpiece, Disintegration. Still, The Cure required a mini-festival lineup to fill the stadium. Depeche Mode was largely carrying this show on their own, as JAMC and Nitzer Ebb only attracted a very niche lineup. Proving they warranted the booking, 42,000 tickets sold on just the first day of sale, in an era where fans still had to queue up -- many overnight -- for hard tickets to be sold and printed at box offices and ticket selling locations.

The near-endless chatter and advertising created the feel of a not-to-be-missed event. Radio station 92.7 WDRE (aka WLIR) was an exclusive media promoter of the gig, and they broadcasted live from the venue throughout the afternoon leading up to the show, interviewing all three bands and highlighting their music throughout the day. As I detailed in an interview with WDRE on-air presenter, Malibu Sue for the Home site in 2006, her quick thinking saved half of the duo. “Nitzer Ebb opened the show – personally chosen by Depeche. I ended up saving one of the guy’s necks -- can’t remember [if it was Bon or Doug] now -- as he decided to crawl out the open window of the press box we were watching Depeche from and almost fell to his death! I grabbed him and pulled him back into the window!” Sue’s personal connection to the Giants Stadium show runs even deeper. “One of the fondest [memories] of my career was when the band only allowed me to go on-stage to intro them at Giants Stadium. The reception I got from our beloved listeners brought tears to my eyes. Looking out over a crowd of about 80,000 was daunting, to say the least, and I was very grateful to the band for the opportunity! I was so touched and overwhelmed, I barely choked out ‘I love you’ to the crowd. It was exhilarating.”

The Giants Stadium show was certainly momentous for Depeche Mode and their fans. It also proved monumental in shaping other bands’ histories. Violator producer, Flood, was introduced by Anton Corbijn to Bono and Adam Clayton in the press box, which led to Flood’s production of U2’s iconic Achtung Baby album.

Flood recalled the meeting for U2.com: “Depeche Mode were playing Giants Stadium (after we’d recorded Violator together) and I was sitting on my high throne in the press box, getting absolutely mullered, thinking, 'How good does this get?', when Anton Corbjin says, 'Flood, I have a couple of people to see you.' These two scruff-bags with hoodies and a beard walk through the door, and it’s Bono and Adam, in disguise. So we were all there, having a few jars, and they said, 'We want to blow up the old U2, and go to Berlin to make a new record. Are you interested?'

“The band [U2] couldn’t go back to where they were - that was the overriding philosophy. They were saying to me, 'Be as free as you want to be. Try everything!' I’d been working with Depeche and Nine Inch Nails, so they were looking for some of that ‘industrial’ input.”

Megafan Christian Montone shared this encounter from earlier in the evening: “That June, friends and I (and seemingly the ENTIRE New York / New Jersey area) descended upon a packed Giants Stadium to see Depeche Mode, The Jesus And Mary Chain and Nitzer Ebb on what was called The World Violation Tour. Bono from U2 was in the lighting booth behind [our floor seats]. Those of us nearby in the crowd sang [the “how long to sing this song?” chorus of] U2’s “40” to him and well, he wasn’t thrilled. He nodded at us with a withering smirk and was spirited away by security.”

Having already seen Depeche Mode on the Black Celebration and Music for the Masses Tours, I wasn’t prepared for the spectacle of seeing them in a stadium setting. The 50-foot-high stage rigging dangled similarly gargantuan roses flanking stage left and right. The sun was still setting in the early summer sky as the opening house music thumps of Kaleid began pulsating, sending the crowd into a frenzy. It was the perfect intro to prep the crowd for the bass-heavy World In My Eyes show opener. This and the five tunes that followed (Halo, Shake the Disease, Master And Servant, and Never Let Me Down Again) could’ve stood on their own as a perfect intro to DM mixtape. Waiting For The Night gave us our first chance to catch our collective breaths and take in the vocal duo of Dave Gahan and Martin Gore. The acoustic set of I Want You Now and World Full of Nothing followed. (IWYN had actually received steady airplay on 92.7 WDRE-FM for years, so it was greeted rapturously by the tens of thousands of us hanging on every note.) Clean bookended the acoustic set, and provided the last chance for any butts-in-seats for the evening. The setlist for this tour has been obsessed over, especially in the absence of an official live recording release. But the remainder of the set that evening was all-killer/no filler. (I’ll leave my current feelings on Policy Of Truth out of this, as I recall it being the only tour I enjoyed hearing it.)

As my friends and I made our way back to my car, drenched in sweat from the second encore’s one-two punch of Behind The Wheel and Route 66, we were still in awe of what we’d just witnessed. Happily, I’d have another opportunity a couple of nights later to see Nitzer Ebb’s full set with their only theater show of the North American leg, at Radio City Music Hall. (But we can revisit that show at some other Violator anniversary milestone.) (APA: 45th anniversary anyone? Nooooooooooo)

Ironically, Violator and the World Violation Tour marked both the height and the end of the era for synth-pop in America as the Madchester genre became the flavor of the year on alternative radio, which had long been the home for all things-Depeche. Just over a year after the Giants Stadium show, grunge rock started to make the technical and songwriting brilliance of Violator seem increasingly out-of-place on the radio format DM helped build. (And as we know, the grunge era heavily influenced at least Dave’s outlook on the band starting with Songs of Faith And Devotion.) The show at Giants Stadium, however, will always stand out as a pinnacle event in my decades of fandom.