MARCH 19,1990 - BECAUSE WHEN YOU LEARN, YOU'LL KNOW WHAT MAKES THE WORLD TURN

Today marks the 30th anniversary of the release of Violator. To many of you reading this, that is the only thing worth celebrating every time we get to March 19th. Here's the thing though - this blog is spending all bloody month looking at Violator from every single angle there is. It would be easy for me to simply post a picture of the album sleeve today and write "Happy Birthday" underneath it; in fact it would be sensible, 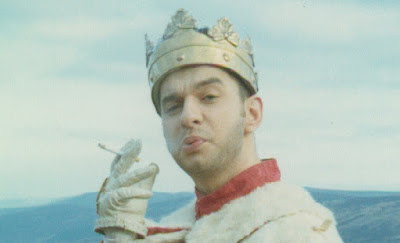 By the time we reach March 19th, it will be 10,958 days since Depeche Mode released Violator. In that time, you could have listened to the album 335,734 times give or take. I imagine that some of us have got quite close to that figure. That said, using average sleep statistics, you would have slept for 3.655 days of that time, so that's only 223,751 times you could have listened to Violator. That's much more normal.

The birthstone for March 19th 1990, whatever in God's name that is, is sadly not black but aquamarine. One of that birthstone's energies (sigh) is peace which was thankfully something Martin was not thinking about until 2009.

On release day itself, George H.W. Bush was the Amercian president and Britain continued to have the misfortune to be led by Margaret Thatcher. At least both countries have been blessed with better leaders tod.....oh. Black Velvet by Alannah Myles was number 1 in America and in the UK, Dub Be Good To Me by Beats International was in its third week at a hugely improbably number 1.

On the day Violator celebrates its birthday (tenuous link ahead), many other people and things do too.

For example, the first free elections in Latvia in over 50 years took place on 19th March 1990. Is it any conidence that the legendary Depeche Mode bar in Riga opened a few years later?  It probably is a coincidence to be fair.

Only four years after Violator's release, the largest ever omlette was made in Yokohama, Japan. They used 160,000 eggs apparently. I wonder how many person's shelled je-ust- that many eggs. Person, shell, je-ust. No? No. No, indeed.

Notable birthdays on March 19th include:

Johan Georg Roser, the composer, 1740. Only 250 years later, Anton would pay tribute to his surname with the cover art. Possibly.
David Livingstone, Scottish explorer, 1813. "Dr Livingstone I presume?" "That's right - tell me, has Alan rejoined the band yet?"
Wyatt Earp, 1848. No known Depeche Mode link
Ursula Andres, 1936. No doubt she is the Happiest Girl in the room on her birthday
Bruce Willis, 1955. Sadly he didn't get round to his birthday based Depeche Mode take over a tower block and he kills them all epic DieOlator.

There we are then - proof that the world still had other things to do on the day Violator came out. We didn't though (unless you are reading this Mr Willis, in which case happy birthday), all we had was Violator And that's worth celebrating.