These days, it seems a surprise to see Martin standing behind his keyboards such is the prevalence of the guitar in the modern Depeche Mode sound. Until Personal Jesus was released, the guitar in Depeche Mode had been either a surprise accompaniment (Love In Itself), a sample that featured prominently in a song (Strangelove, Never Let Me Down Again) or a fairly restrained sounding instrument, adding texture to songs more than anything else (Behind The Wheel, Nothing). Personal Jesus introduced us all to the notion of a Depeche Mode song being dominated by the instrument and it was a pretty good way to break us in to this, generally speaking, new sound in a Depeche Mode song.

Personal Jesus was recorded in Milan with Flood and was the first finished Violator track. The Anton Corbijn photoshoot for the single artwork (more of which to come) also took place in Milan in May 1989. They even found time to take a few photos not involving a naked 17 year such as this one that was used in Spin magazine: 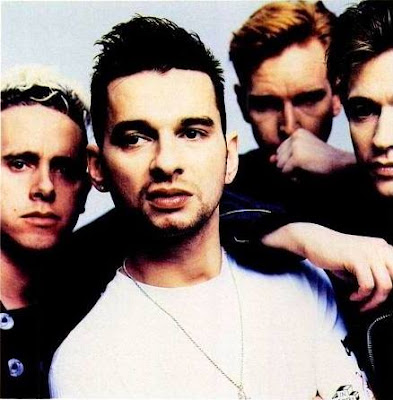 The first of Dave's "Look how hard I am" Violator era poses, you have no doubt noted. There were also some pictures taken that hinted at what was shortly to come for the Personal Jesus video: 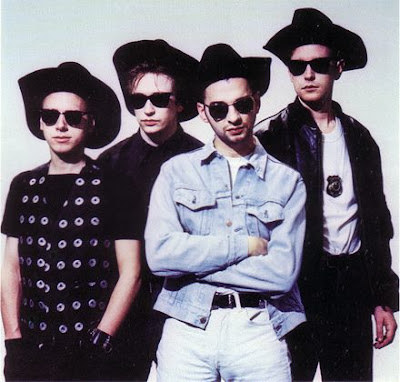 Almost as soon as the photo session was done, in June 1989 the band and Anton headed to the Texas Hollywood Theme Park in the Tabernas Desert, Almeria, Spain to film the quite stupendous video for the single, no doubt bringing their already broken in cowboy hats with them. If you want to commemorate Violator's 30th birthday in way this blog would heartily endorse, you could recreate the video - you can still hire the set here (click here and touch faith).

One thing you will hear a lot of over this month is me endlessly going on about how incredible every single piece of the Violator era is. Everything about this period clicked for the band from the music, to their Anton assisted image, to the monumental World Violation tour and the band had never looked cooler. The grainy theme Anton started with the Music For The Masses videos continued and his video for Personal Jesus complimented the mood of the song perfectly. His photos from the shoot are wonderful too, for example: 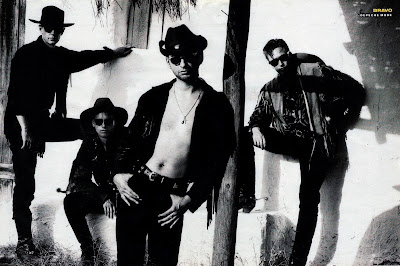 Remember, this is only 4 years after they were running about like sun tanned buffoons in the It's Called A Heart video.  The Personal Jesus video is a masterpiece, an iconic Depeche Mode moment that manages to be moody and serious while still having some fun, for example, where a horse's arse pops up just as the sampled breathing part in the middle of the song arrives. Fletch on a rocking horse is a moment not to be missed too.

(As an aside, if I ever do get a chance to ask Martin about his songwriting, in among the 5000 other questions will be "What is that breathing thing in Personal Jesus all about? What prompted that)

Here is the video in all its dark glory:


With the video in the bag, the Violator recording sessions continued. An odd thing to note is that while Personal Jesus was being recorded, the band were finishing off their 101 promotion and Martin was preparing for the 12th June release of the wonderful Counterfeit e.p. Remember that 101 had only come out in March 1989 and it was preceded by Everything Counts (Live) on 13th February. 1989 was an incredibly busy year for the band and it feels like the year that the old shy, synthesiser led, accidental stadium filling Depeche Mode said goodbye, making way for the new confident, quite deliberately stadium filling Depeche Mode. The difference between the band we see in the Everything Counts (Live) and Personal Jesus videos is quite stark.

The single was released on 29 August 1989 after an interesting promotional campaign. Adverts started to appear in British newspapers. All they said was "Your own Personal Jesus." A week after this, adverts like this appeared in the press and on London Underground adverts:


When you dialled the number, instead of hearing the soothing voice of someone who you no doubt considered your saviour, you instead heard a new Depeche Mode track. For people like you and I dear reader, that would inevitably be a good thing. For anyone seeking salvation however... 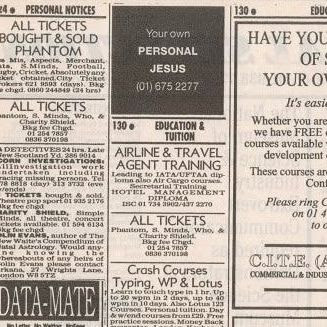 The advert caused some controversy apparently. How odd.

Controversy was also caused by the photographs that appeared on the various formats that were released. As we will see, the band featured in various pictures with a naked 17 year old (as least according to Alan - see Shunt ) Italian model. The standard 7" single features a normal front cover: 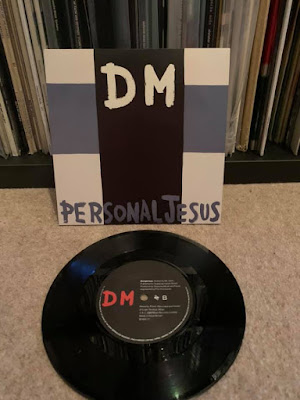 and, on the back, we find Martin with the model: 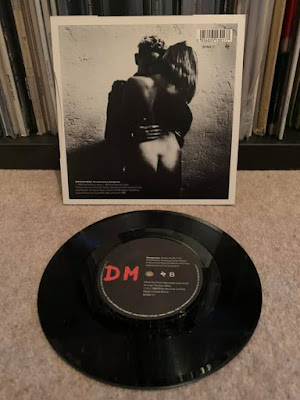 To avoid any further controversy or to avoid radio stations refusing to play the record, the band released a promo 7" single with a normal cover: 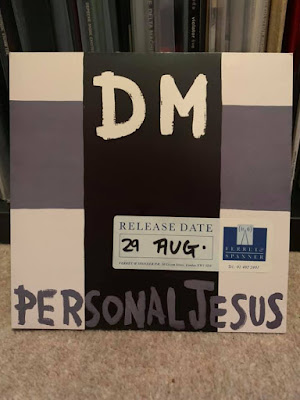 and with a Martin and model free rear cover: 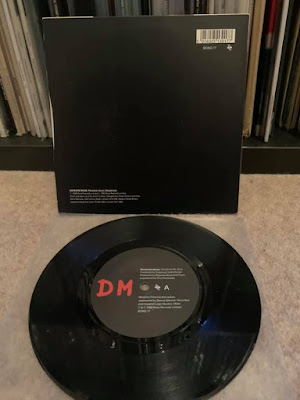 They did the same with the CD single too. I don't yet have the censored one however, so you'll just have to believe me there. If you have it and if you don't want it, feel free to get in touch...

The promotional whirlwind was completed by the release of a promotional 12", P12BONG17 which featured two mixes from the commercial limited 12" and limited CD singles, namely the Pump Mix of Personal Jesus and the Hazchemix of Dangerous, the single's excellent b-side. 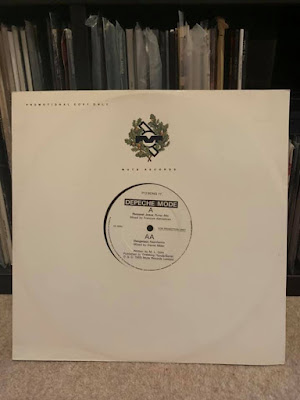 A couple of promotional cassettes are available too, but, like the censored cd, they continue to elude me.

Enough collector nonsense about promos however. What about the single itself? BONG17 was released on 29th August 1989 and reached a disappointing number 13 in the UK charts. It was top 5 in Germany and Italy and, for a time, was Warner Brothers' biggest selling 12" in the US. On the UK format side of things, the 7" pictured above featured the single edit of Personal Jesus and a new track called Dangerous. The cassette single featured the same two tracks: 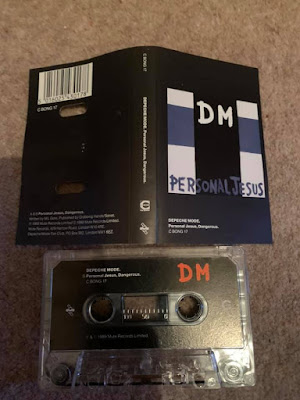 The cassette is where we see Fletch's picture with the model. Unlike the other three who all appear to embracing her, this picture seems to show the girl shouting at or at least berating  Fletch. Alternatively, perhaps neither of them wanted to be there which may well be the case: 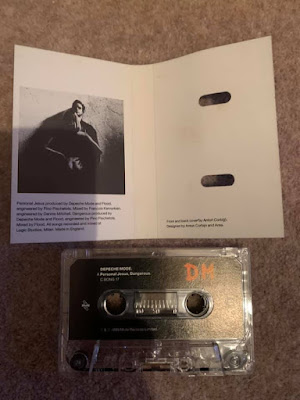 Dangerous really is a great track and is the first in a line of quite brilliant Violator era b-sides. It is perhaps a bit too old style Depeche to have featured on the album, as it lacks an edge the nine songs that feature do, but that is not to detract from it. It acts like a bridge between the Music For The Masses era band and the Violator era in a way and that's no bad thing.

The band's first ever gatefold single appeared too (front cover above). It's a lovely package, a limited edition featuring a mini booklet inside a gatefold sleeve and a three track 7" single. The front cover mirrors the limited edition 12" and CD single covers as does the rear cover. As you'll see below, the rear cover also features a picture of all four band members with the model. The a-side is unsurprisingly the single mix of Personal Jesus.

The first b-side is the Hazcemix Edit of Dangerous, a mainly instrumental version of the b-side with a thrilling number of beeps, beeps and acid type squiggles.

The other track is something very, or at least mainly new for Depeche Mode - Personal Jesus (Acoustic). This is just Dave and Martin and it is really rather special. Put it this way, it is truly an acoustic take on the track rather than the lounge like Love In Itself 4 or clearly drunk ending to the Slavery Whip Mix of Master & Servant, the band's two previous acoustic(ish) efforts.

It's a really interesting release and a nice package.

The Personal Jesus artwork is a glorious thing, The front covers are stark but quite beautiful and that together the font used on the inner sleeve of GBONG17 and the labels of the various vinyl releases seem to match the song perfectly.

The standard 12" and CD single each contain the same three tracks - Personal Jesus (Holier Than Thou Approach), Dangerous (Sensual Mix) and Personal Jesus (Acoustic). The 12" was originally issued with black labels as above. Later re-presses had red labels instead.

The Holier Than Thou Approach mix is a remix by Francois Kervorkian and it focusses on the track's glam rock feel to excellent effect. The last 1 minute 32 seconds of the mix feature on the Violator version of Personal Jesus.

The Sensual Mix of Dangerous and the Acoustic Mix of Personal Jesus are both mixed by Flood. The Sensual Mix is a marvellous extended remix like version of the song and one you must hear.

As you can see, Dave gets to star on the 12" cover and Alan on the CD single.

As it is Depeche Mode, you are almost guaranteed a limited edition remix package and there were two for Personal Jesus on 12" and CD. Some copies of the 12" and CD featured a sticker on the cover saying "Depeche Mode Limited Edition Remix" as can be seen on my 12" above.

There are three tracks on both the 12" and CD. They are: Personal Jesus (Pump Mix), Personal Jesus (Telephone Stomp Mix) and  Dangerous (Hazcehmix). The Pump Mix is another Kervorkian remix and is the stand-out remix across all formats. Simply brilliant.

The Telephone Stomp Mix is a remix by Flood and, like his Sensual Mix of Dangerous, is a great take on the track. Finally, the Hazchemix of Dangerous is by Mute boss Daniel Miller as, unsurprisingly, is the edit of that track on the gatefold 7".

The quality of the remixes across all seven formats is impressively strong. The Japanese cd single of the time or the later 2004 reissue CD are worth listening to as stand alone albums if that's your sort of thing such is the quality here.

Personal Jesus was the world's taster for what was to come with Violator. It was released seven months before the album and it was a brave choice for a comeback single. It has endured as a song, as is shown both by the fact huge crowds still go crazy for it at Depeche gigs and by the fact that it has been covered on numerous occasions by artists as diverse as Johnny Cash, Marilyn Manson and Def Leppard among others.

Personal Jesus is a remarkable track in the history of Depeche Mode. This was only seven and a half years after The Meaning Of Love remember. The band had made many leaps in the period 1981 to 1987, but the leap they made from the end of the Music For The Masses campaign to releasing Personal Jesus was one nobody saw coming. From this point on, Depeche Mode were an entirely different proposition.