PUT IT ON - MARTIN GORE AND HIS VIOLATOR VOCALS 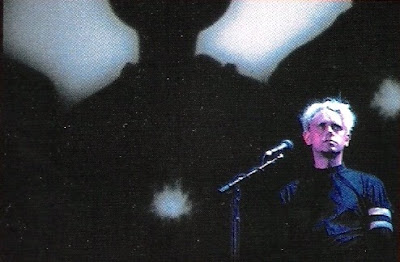 When I looked at Martin's Black Celebration lead vocals in 2016 in the snappily titled "More Gore Than Ever Before," I talked about the fact that Martin's proportion of leads on that album was his highest on any Depeche album to date. For maths fans, he sings lead vocals on 36% of the tracks on that album. That's the type of insight you've come here for. On Violator, Martin is a prominent voice on three of the album's songs, taking lead vocal on two and appearing all over another, making it essentially a duet with Dave. That 33% of Violator is what we'll look at today.

Violator's second track is an absolute masterpiece. After the opening Depeche Mode does Kraftwerk God-like genius of World In My Eyes, a drumbeat shuffles in from the distance, a bassline begins and all of a sudden, Martin arrives singing another song about some sort of weird obsessive love. You could read it as a song sung by someone holding a person hostage in their garage, standing over that person watching them, or, quite understandably, you could focus on simpler things such as just enjoying the song.

There are two real highlights in the song for me. Firstly, the way the music builds and builds to its eventual explosive climax is superb. From 43 seconds in, the swirling noise that appears gives the song a strange, claustrophobic feel and it builds from there, with typically Wilder like layers building and building. A guitar strums idly before a gloriously metallic noise coupled with odd metal percussive noises (very Some Great Reward) arrives and takes the song in a clanking, oddly percussive direction. But what's this springing into the song like the sun rising over a scrapyard filled with the ghosts of DM albums past? Pleasingly, it's an orchestral section that arrives at 2 minutes 7 seconds, soothing us while Martin discusses swapping whatever his perfection is for "an assorted collection," the contents of which we are clearly better off not knowing. No trade though, as Martin tells the would-be trader to bugger off and, after an odd metal noise that sounds like a robot cat meowing, we back in familiar territory with more Wilder like noises all over the shop. The last two minutes are majestic. The instrumental section from 3 minutes 12 is a riot of noise and phased drums which is definitely a part we all air drum along too. Isn't it? Just me then.

Before you wasted valuable time reading that paragraph, I mentioned that there were two highlights in the song. The second one is the last minute of it where a new voice enters with 48 seconds left. All of a sudden you say "Hang on! That sounds like Dave." You're right, it is. This is new ground for Depeche and it's ground we can all get..erm...on. We are long used to Dave having Martin harmonise or sing counter melody with him, but we are not used to it being the other way round. It's bloody brilliant. Alan lets them sing while creating more noise and fuss behind them, and the song climaxes with backwards noises, more phasing and a general, hugely enjoyable cacophony. As Alan told Shunt:

"The weird stuff came together at the end during the mixing stage. It's the kind of thing you resort to when you haven't really got an ending."

Grumpy bugger. Anyway, the song is a real surprise as it feels more like it should be a Dave lead rather than a Martin one, but it really works with Martin's lead vocal.

The song was played 20 times on the World Violation Tour in Martin's acoustic slot. The video above is from Frankfurt on 14th October 1990. Martin also played it 8 times on his 2003 solo tour, but it's not been heard of since.

WAITING FOR THE NIGHT


Not satisfied with giving us the Martin singing lead and Dave providing counter melody shock of Sweetest Perfection (I have 31 days to fill this month so bear with me), the band continued to smash perceptions with what I'm going to call their first official duet track. And please let me assure you that I am not just doing that because Waiting For The Night didn't fit anywhere else and wouldn't have filled a blog on its own. No. To my mind, or more accurately, for the purposes of blog symmetry, Waiting For The Night sees Dave and Martin share vocals.

The song itself is a haunting, bubbling epic; a perfect centrepiece for the album. Alan and Flood attempted to create a Tangerine Dream like feel to the song (see Alan's Shunt Violator Q&A) and the effect they create gives the song an intense but uplifting feel. The bubbling synths that underpin the song are the star of the show and the duet accompanying them enhances the intensity of the song.

Dave's parts are understated, almost whispered in places. Martin's harmonies counter those whispered lines beautifully. In the verses, the twinkling synths evoke the stars the that are guiding Dave and Martin and it is frankly perfect. It is such a gorgeous song. Alan being Alan, more noises interrupt the calm, especially the "what the hell is that ?" awa-awa-awa-awa-awa-awa-awa-awa thing that arrives at 3 minutes 6 seconds, shaking you from the reverie the song has induced.

At 3 minutes 33 when Dave starts squinting and the world starts, er, rose tinting, ghostly noises emerge alongside Martin's singing leading us into the last chorus with Martin now adding counter melodies in the places he was previously silent. It works wonderfully. The song then plays out with a final haunting synth line, leading into Martin's "Ah-ah-ah-ah" where ghostly versions of himself sing along before the song ends leaving you mesmerised as only Depeche Mode at their very best can. In 1990, you'd then get up and change the tape or record over and start Side B. If you were the lucky owner of one of those fancy CD players, you'd get woken from your trance by the first note of Enjoy The Silence. Bloody hell, Waiting For The Night is an absolutely sensational song.

The band loved it too, playing it on all 88 World Violation Tour shows, As we know, and as we'll hear more about later on this month, there is no official footage of the World Violation Tour so videos like the one above from Frankfurt are the only way we can see just how wonderful this song was live on that tour. Martin left his keyboards and guitar behind and stood behind a mic to duet with Dave and Anton's majestic film played behind them, unsurprisingly complimenting the song perfectly.  The song has also been played live another 131 times by the band on the Exotic (3), Exciter (85) and Tour Of The Universe (43) tours. It always goes down well but has never matched its glorious World Violation Tour version.

"Then there's Blue Dress - that's the pervy song! The idea of watching a girl dress and realising that this is 'what makes the world turn'."

That says it all really. If my theory about Sweetest Perfection above is in any way accurate (it isn't), then Blue Dress is clearly the second part of Martin's until today unacknowledged history as a serial killer. In this song, "pervy" by his own admission remember, Martin watches someone put on a dress from, one can reasonably assume, is an initial state of nudity. It's a odd topic for a song certainly but, perhaps unsurprisingly, it works. Blue Dress is a cracking song.

Alan disagrees of course, but Alan would. When asked about Blue Dress in one of his Shunt Q&A's, he said:

"Not one of my favourites - hence penultimate track on LP (filler position). I would put it in the same bag as Get Right With Me on SOFAD."

Harsh from Alan there. I certainly wouldn't say that Blue Dress is a filler track by any means. It's impossible to imagine Violator without it and there can surely be no sane argument made for any of the B-sides taking its place. The same can't said for Get Right With Me to use Alan's comparison. For pedantry's sake, I should point out that Get Right With Me isn't SOFAD's penultimate track either. I tried to avoid writing that but felt I couldn't move on without doing so.

Alan's ambivalence towards Blue Dress mirrored the band's approach to it as a live track on the World Violation tour too. It only appeared twice, both times in Martin's acoustic set. He played it at San Diego Sports Arena on 31st July 1990 and at Bercy in Paris on 23rd October that year. Here is the Paris concert featuring version from the ever marvellous dmlive.wiki :

After World Violation, the song continued to be ignored until resurrected by Martin for his solo slots on Touring The Angel (two appearances) and the Delta Machine tour (13 appearances including the one above in Moscow on 7th March 2014). Always warmly received (at least by me), Blue Dress seems destined to forever remain a rarity.

That then is an analysis of the 33% of Violator that features the angelic tones of Mr Gore. An assorted collection, but what a collection.