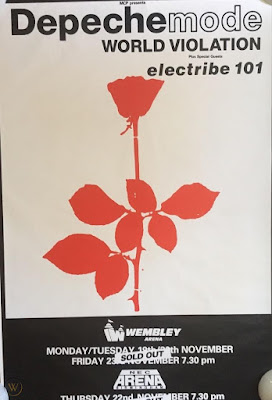 By the time the Music For The Masses tour ended at the Rose Bowl, Depeche Mode had become accidental stadium stars. The band had been regularly filling arenas in Europe and America since Black Celebration but the 18th June 1988 show took them to a different level entirely. Stadiums were for dull rock bands not Depeche Mode's contemporaries, with the exception of U2. The Rose Bowl show changed the perception of Depeche Mode as a live act and opened the door for more of the band's contemporaries to enter the stadium arena - see for example, The Cure's Giants Stadium show on The Prayer tour in 1989.

Come World Violation then, the question for Depeche Mode was could continue their remarkable upwards trajectory or was the Rose Bowl show a one off? World Violation Tour's 88 dates proved that Depeche Mode could not only brush off the suggestion that the Rose Bowl was a one off but they could also easily claim to be one of the biggest live draws on the planet at the time. The accidental stadium band had become quite deliberate stadium fillers. 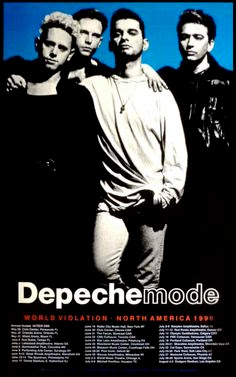 There may have been fewer dates on World Violation than there were on the Music For The Masses tour but the sheer scale of the tour was something different entirely. For the first time in their career, Depeche Mode's tour would only feature arenas and stadia. The tour used visuals heavily for the first time too with Anton Corbijn's stunning films accompanying tracks on large video screens behind the band. While screens were not necessarily new in live music, this type of show for a band who were still considered "alternative" in America or mainly disregarded in their home country was ground-breaking. You could easily make an argument that one of Corbijn's other clients, U2, were keeping a keen eye on things as their ZOOTV tour clearly draws influence from World Violation.


Rehearsals for the tour started in London at Nomis Studios in May 1990. I imagine that I'm not alone when I say I'd like to have been a fly on the wall (windscreen?) at that. The band's 100 crew and 11 lorries then headed to Pensacola in Florida where final rehearsals took place before the opening night at that city's Civic Center on 28th May. As we can see from the picture below, Dave was very much adopting a 100% leather policy on the night:


The setlist for each night was the same bar an acoustic interlude from Martin. The usual set was:

It's a great setlist with Martin's acoustic set being a novel but welcome addition. Most versions of the songs are really good with only Everything Counts suffering from an attempt to over modernise it. As you'll see, the band ended on a cover which seems an unusual choice. That said, Route 66 worked well, as it originally did in its various guises on the Behind The Wheel release. I think of the regular "why don't they vary the setlist" fury that arises on any Depeche tour these days when I look at the World Violation tour setlist. You imagine people would have been exploding with rage at the band basically playing the same setlist 88 times in 1990 which would have been quite mad.

The North American leg of the tour consisted of 44 dates over a 3 month period and it basically sold out entirely. Famously, the band played three massive stadium shows - one at Giants Stadium on 16th June and 2 sold out shows at Dodger Stadium on 4th and 5th August, a more than fitting end to a remarkable North American leg. Sean Salo is writing about the Giants stadium gig for this project and that will feature in a few days so we'll leave that for now. The Dodger Stadium gigs are worth a paragraph or two on their own.

The video above is from the UK television programme The Word. As you can see from its sneering tone, people in Britain couldn't quite believe what Depeche Mode were doing elsewhere in the world. The figures for both Dodger shows speak for themselves however. After the first gig was announced on June 2nd, it sold out within an hour. A second show was then announced on 5th June and once again, it sold out. 96, 350 tickets for both shows gone. It's absolutely remarkable.


The support on both nights was Nitzer Ebb and Electronic. What a line-up. Remarkably, Electronic were joined by Pet Shop Boys during their set thus placing Depeche Mode, Pet Shop Boys and members of New Order and The Smiths in the same place at the same time. All it needed was a solo set from Robert Smith and you'd have had the perfect gig.

The setlist the band played on both nights was the same, with the exception of Martin's acoustic slot. On the first night he played I Want You Now and World Full Of Nothing, with Here Is The House and Sweetest Perfection replacing those on night two. The official Depeche Mode site has 90 second clips of each song available to view and I strongly recommend that you do just that. As we'll see in tomorrow's DM Live Wiki article, there is no official live release from this tour. A soundboard recording of the 4th August gig is something you shouldn't miss however - more of that tomorrow.

The second Dodger gig was the last of the North American leg and the band headed into a three week break before their first ever live shows in Australia. Two shows were scheduled there - 31st August at Hordern Pavilion in Sydney and 1st September at Melbourne Festival Hall. Unfortunately, Dave damaged his vocal chords during the Sydney gig so Melbourne had be cancelled on medical advice. A real shame for the Australian fans.

After a rest, the tour moved to Japan for 6 gigs between 4th and 12th September. As we saw earlier this month, that tour prompted the release of the ultra rare World Violation cd thus making it an expensive tour for fans at the time and collectors many years later.

The tour's final leg kicked off on 28th September in Brussels. The European leg consisted of 38 gigs including a UK tour that featured 6 gigs and somehow managed to take in only two cities - London and Birmingham. There were three nights in Paris, two in Dortmund and Berlin with the tour also reaching Denmark, Sweden, Switzerland, The Netherlands, Spain and Italy.  The support for the European leg was Electribe 101. I spoke to Billie Ray Martin when researching Halo and she confirmed that the band were personally chosen by Depeche Mode. The band found the audience quite tough because, in their keenness to see Depeche Mode, they would throw things at Electribe 101 and act with a general sense of hostility. It got so bad that Alan had to appear on stage in Paris on night two of the three night run to ask the crowd to behave, reminding them that Electribe 101 were there as Depeche Mode's personal guests.  You will be able to read the full interview with Billie when Halo is published. 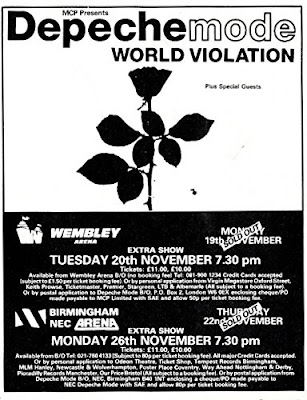 The band finished up in Birmingham on 27th November with their position as one of the must see live acts fully confirmed. The album and tour had been a huge success and Depeche Mode were at the peak of their powers. For the first time in years, if even the first time ever, the band decided to take some time off before plotting their next move. The next time the world saw Depeche Mode, they would be a very different band indeed.